Role of the gut in systemic inflammation

The multi-layer wall of the intestine is unique and important due its barrier function for billions of potential deadly gut bacteria and the sterile tissues in the body. For this reason, the intestine is equipped with highly specialized immune cells to keep microorganisms at bay. However, during instances of systemic inflammation, immune responses become unbalanced, causing disruptions in the microcirculation, and potential dissemination of bacteria products to the sterile compartments of the body, causing secondary infections.

During systemic inflammation, such as sepsis, the immune responses become hyper-activated, causing a systemic release of cytokines and inflammatory mediators aimed at eliminating pathogens. The most abundant immune cells activated during this response are neutrophils, which are recruited to the site of infection within minutes following trauma. In an attempt to attack invading micro-organisms, neutrophils release anti-microbial agents, such as ROS. However, these anti-microbial agents act indiscriminately, causing damage to healthy host tissue and exacerbating the inflammatory environment. In the intestinal microvasculature, the continuous migration of neutrophils and release of anti-microbial agents, damages endothelial cells, increasing microvascular permeability, which leads to tissue edema and potential bacterial dissemination. 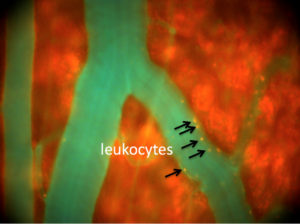 The intestinal microvasculature is comprised of capillaries, arterioles, and venules, which form a branching network to serve roles in the absorptive, secretory, and protective functions in the intestine. When microcirculatory disturbances arise from dysregulated immune responses, the effects are far reaching, impacting the microvascular blood flow in the intestine as well as other essential organs. Persistence of severe blood flow alterations within the microvasculature have been associated with both the development of multiple organ failure and mortality due to an inadequate oxygen supply to tissues. Although perfusion in larger vessels is also important, tissue perfusion mainly depends on capillary blood flow, which are the vessels that contribute predominantly to oxygen and nutrient supply to tissues.

The microvascular blood flow in the intestine and other organs is directly related to the interaction of immune cells with the endothelium, and indirect factors such as platelet activation leading to intravascular coagulation or changes in protein composition of plasma. Therefore, therapeutic protection of the intestinal microcirculation represents a promising approach to improve the outcome of patients with systemic inflammation, such as sepsis. With the use of in vivo imaging techniques, such as intravital microscopy (IVM), we can get real time imaging of dynamic processes in the microcirculation, including leukocyte endothelial interactions and capillary perfusion with fluorescent staining. Using IVM, we can observe disturbances in microcirculatory function to predict disease progression, and monitor specific treatment approaches, such as an anti-inflammatory treatment aimed at reducing leukocyte endothelial interactions. Since IVM is an in vivo method, its parameters respond in real time, making it more sensitive for therapeutic monitoring than commonly used methods such as measuring C-reactive protein levels, which remain high even after the inflammation has resolved.

There is still a significant gap in knowledge regarding the fundamental mechanisms of systemic inflammation. However, recent advancements, such as the determination that it is the dysregulated immune responses that cause pathologies associated with systemic inflammation, rather than the infectious etiology itself, will lead to the development of better therapeutic options. Additionally, advancements in imaging technologies, such as miniaturization of machines and automation of data analysis, are necessary to make them a useful clinical tool for measuring disease progression and therapeutic monitoring of drugs.