Rust proofing the humble oat: wild cousins to the rescue

Crown rust is a disease caused by the fungus Puccinia coronata (Pc) that leads to a reduction in grain-yield of the oat crop and other cereals. Rust diseases of oat and cereals like wheat and barley result in substantial yield losses globally. The fungal pathogen is visible on leaves of the oat plant as orange to brown rust pustules that cover the leaf surface and reduce photosynthetic efficiency, and eventually grain-yield. Resistance genes (“Pc” genes) in the host plant provide effective protection against the rust fungus, via interaction with avirulence (Avr) genes in the rust fungus on a gene-for- gene basis. Pc genes remain effective against their attacking rust races for between 3-5 years, after which they are usually overcome by the fungus resulting in the outbreak of disease. Therefore, there is a constant search for new sources of resistance, especially among wild oat species that are known to carry new resistances against rusts. These genes can then be transferred to cultivated oat species by crossing/hybridization. Currently, there are around 97 known Pc resistance genes for resistance to crown rust in oat; each of which provides protection against a different race of the rust fungus. Pc genes are located in different regions of oat chromosomes, and some can be tracked by molecular markers that are linked or associated with these genes. Genetic maps of oat chromosomes provide Pc gene and marker location and distances. 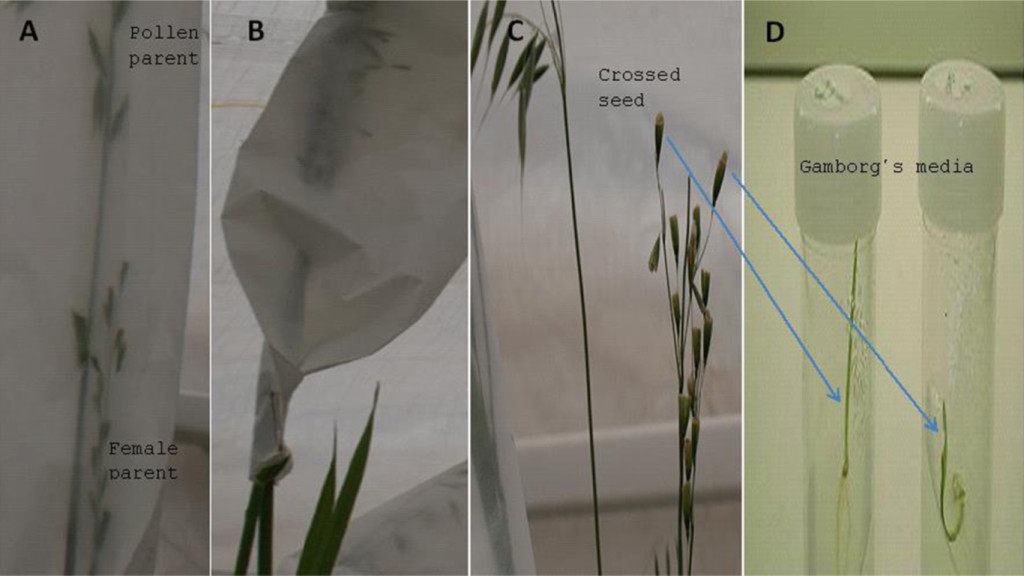 To understand the relationship between the host and the pathogen i.e. host-pathogen interaction during the process of infection, a genetic analysis of resistance to the rust fungus is carried out. This involves artificially infecting the oat plant with a race/strain of the rust fungus and studying the response of the host plant. Disease symptoms become visible on the infected leaves 11-14 days after infection and are rated on a ‘0-4’ scale (‘0’ indicates that the plant is immune to the fungus; while ‘4’ suggests complete susceptibility to the fungus). In order to determine the number of resistance genes in the host plant, an initial bi-parental cross is made between a resistant and a susceptible plant. At maturity, seeds from the female plant or the first filial generation (F1) seeds are harvested and planted; plants are later self-fertilized to generate a second filial generation (F2) progeny-population. This process is repeated for another generation (F3), after which all F2 and F3 generation progeny are inoculated separately with a fungal strain(s) and assessed for disease. The ratios of resistant, intermediate and susceptible plants in each generation are matched against established genetic ratios that provide an indication of the number of genes that are present in the host plant.

In our study, three wild oat accessions, and two cultivated varieties of oat, Saia and Glabrota were infected with three diverse Australian rust races in order to carry out a genetic analysis. A single major resistance Pc gene conditioning resistance to an Australian crown rust pathotype was identified in each of the three accessions. Allelism tests or tests to determine if the identified genes were different alleles/forms of the same gene suggested that these genes are either the same, allelic, or tightly linked/very close to each other. Similarly, single major Pc genes were identified in cultivars Saia and Glabrota, both previously reported to carry three and two crown rust resistance genes, respectively. The identified seedling Pc resistance genes could be deployed in combination with other resistance gene(s) to enhance durability/life span of Pc resistance genes to crown rust in cultivated oat. Current maps and molecular anchor markers (simple sequence repeat [SSR] and diversity array technology [DArT] markers) should facilitate their mapping and transfer or introgression into cultivated oat.