Seaweed or marine macroalgae are renowned globally for applications spanning from functional food, animal feed, commodity chemicals and biofuels. Owing to its huge commercial demand, need for intensive seaweed farming has been rising over the decade. The common methods involve sea-based cultivation wherein seaweed is floated on a raft or nets. However, these methods are constrained due to limited accessible sites, rising sea temperature, seawater acidification and erratic environmental factors, causing apparent reduction in yields. These limitations led to the advent of methods wherein seaweed is farmed in an offshore system, most popularly raceway ponds and tanks and recently introduced photobioreactors. The use of photobioreactor has been for several years applied for cultivation of microalgae, however macroalgae cultivation in photobioreactor is relatively unexplored. Studies in microalgae suggests that, the raceway ponds and open tanks are inadequate systems in comparison to photobioreactor due to higher land occupancy, poor nutrient uptake, lack of temperature control, higher chances of diseases/ contamination and low biomass yields. The launch of photobioreactor for commercial scale seaweed production will emerge as next generation system with research focused on reducing construction cost, cultivation of high-value seaweed species, improving yields of biomass and increasing capture of carbon dioxide to earn carbon credits. 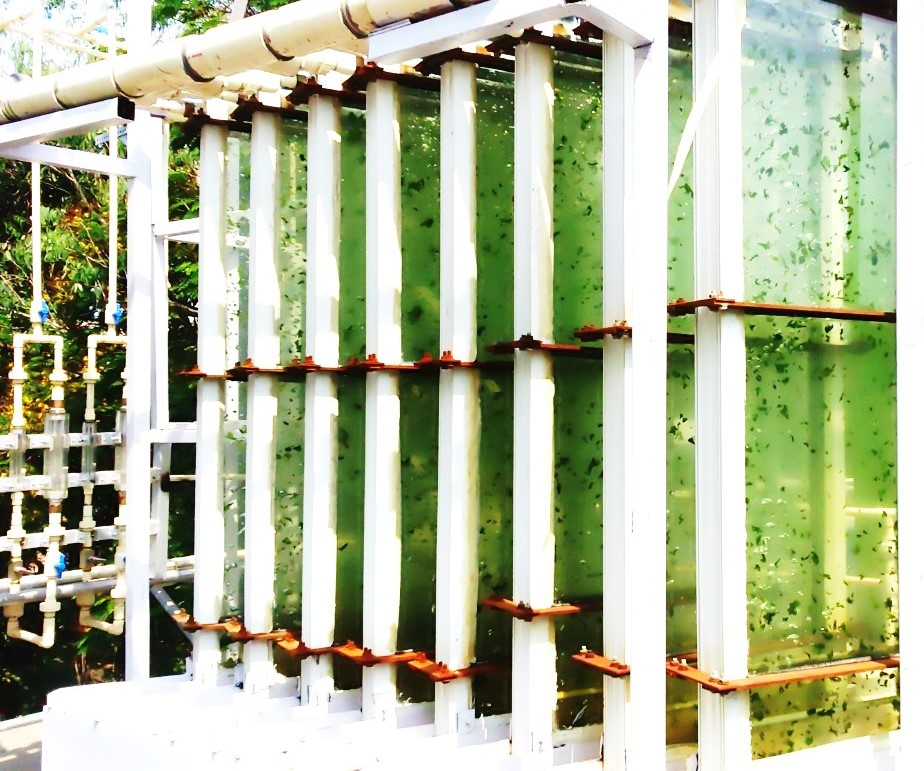 The commercial scale seaweed production will involve cultivation at a scale of several million litres. However, before unveiling the commercial scale photobioreactor, it is important to gauge the system competency at a lower scale. In present study, we introduce the first ever pilot scale (1000 litres) flat-panel type of photobioreactor system for seaweed cultivation operated under natural light condition. This technology was launched at DBT-ICT Centre for Energy Biosciences in the premises of Institute of Chemical Technology, Mumbai, India.  The evaluation of photobioreactor system mandates suitable seaweed selection, considering ease of cultivation and appealing growth characteristics and biomass application. The sea-lettuce or Ulva lactuca a fast-growing green seaweed, is an attractive feedstock for biorefinery application and thus was chosen as a model seaweed. The flat-panel photobioreactor consisted a series of eight flat panels constructed from toughened glass and supported in a strong plastic frame. While the total system volume was 1000 litres, the height of the photobioreactors was 10 feet and occupied a land area of 7.2 sq. feet. To ensure seaweed is well suspended and to enable ease of nutrient uptake, the photobioreactor was provided with systematic aeration system. Moreover, seawater inside the photobioreactor was temperature regulated for preventing potential damage to the seaweed from seasonal fluctuation in temperature. Sunlight being a natural and cost-free source of illumination, the entire photobioreactor was strategically oriented in east-west direction facilitating maximum exposure to light. To further reduce cost of cultivation and promote eco-friendly technology, the input on chemical fertilisation was nullified by using organic fertiliser prepared from poultry litter.

With natural light regimes, growth studies on Ulva lactuca were performed throughout the year to understand the effect of seasonal variation on biomass yields. The maximum biomass production was achieved during winter season (light intensity=1500-2000 µE) with an annual yield of 85-100 kg per year. With this biomass yield, the present photobioreactor system is expected to generate a whopping 1000 tons of seaweed per year at commercial scale of cultivation. The biomass yield achieved in the study is twice as high compared to open-tank based cultivation while it is 170 times higher than conventional sea-based cultivation methods. While in open tank and sea-based cultivation the growth of Ulva lactuca is restricted to a season, these systems are incompetent in providing continuous feedstock to bio-based industries. With temperature-regulated photobioreactor system, year-round cultivation was successfully demonstrated, making the seaweed a perennial feedstock for biorefinery.