Human growth is influenced by genetic factors, but the genetic potential will be expressed if socio-economic and environmental conditions allow it. Anthropometric indicators like height and weight are used to characterize growth and development of children and youth and nutritional status of populations. Children’s growth and nutritional status can be assessed by using a standardized age-and sex-specific growth reference to calculate height-for-age Z-scores (HAZ), weight-for-age Z scores (WAZ), weight-for-height Z-scores (WHZ) and body-mass-index-for-age Z scores (BMIZ). In the last century, a consistent increase in mean height and weight has been found in children and adults, mirroring improvements in nutritional and socio-economic status, as well as social and cultural transitional processes.The phenomenon has been defined as the secular trend and it provides insight into the link between growth and the environment. The rate of secular changes has varied in relation to the age and living conditions, and also between populations. Previous research suggests that increases in height have slowed in the late 20th century. On the other side, the prevalence of overweight children and adolescents is in rise around the world, both in developed and developing countries. The current study examined and compare the anthropometric data of 7-9 year-old girls obtained in recent investigations in Serbia (2011/16) with data from 1980/81. In total, 1313 girls were included in both investigations. The mean z-score values for height-for-age, weight-for-age and BMI-for-age in the present sample were compared with the corresponding values for the period 1980/81. The growth of girls in both periods was evaluated according to Center for Disease Control and Prevention – CDC criterion. 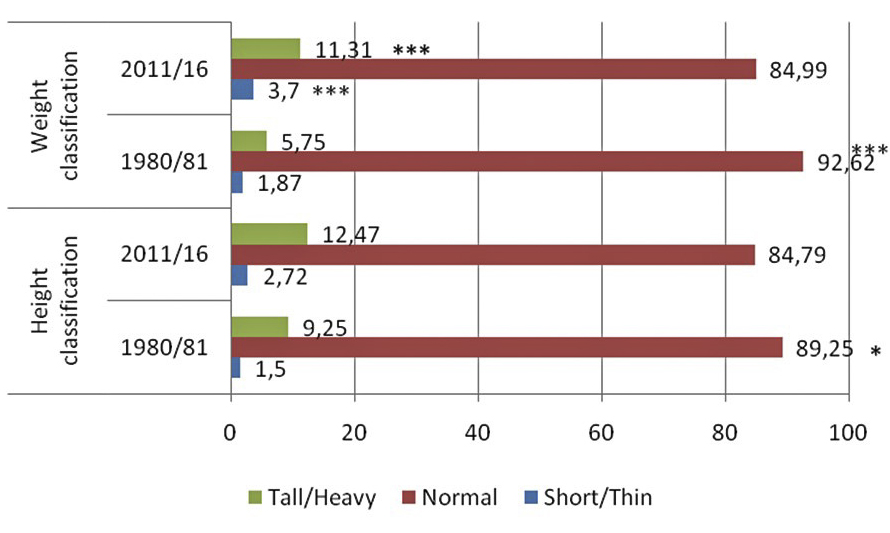 The investigation shows that the secular trend in height is slowing down or has already ceased. The average height of girls recorded 30 years ago (1299.2 mm) is similar to the measures obtained in recent period (1300.8 mm). The majority of girls in both periods of investigation were classified as normal height. The larger proportion of tall girls was found in the second investigation, but the differences were not statistically significant. Previous research in some other European countries suggests that increases in height have slowed in the late 20th century. This is also confirmed in this study and some other studies on secular height trend conducted in Serbia, where increase in height was reported only at certain ages and decades.

On the other side , the increase in the prevalence of nutritional irregularities in girls has also been detected. A higher prevalence of underweight is observable in today’s generation of girls, although an increase in the overweight and obesity prevalence is also present. The possible reason for this trend might be found in the  increase in social inequalities affecting negatively the access to food of the poorest families. The other reason may be connected with fashion pressures for slim body shape, and young girls’ wish to follow fashion trends, which might produce eating problems, even at a very early age.

Undoubtedly the secular trend is due to various factors; the identification of causes is necessarily speculative. Although economic indicators point to a decrease in relation to the previous periods, certain social and cultural transitional processes and changes have taken place through the time and these have undoubtedly contributed to the absence of any dramatic negative changes in the anthropometric traits.

Such changes in growth status possibly reflect cultural and social factors, historical events at the territory of former Yugoslav republics and a very turbulent socio-economic and political situation which began in the 1990s.