In cognitive psychology, the term self-reference effect (SRE) refers to the fact that individuals remember information better when the latter are related to themselves. This effect particularly boosts episodic memory, that is, the detailed memory of personal life events, such as one’s 20th birthday, one’s wedding day, and so on.  In healthy aging, its preservation is acknowledged: the SRE protects older adults from age-related episodic memory decline. In Alzheimer’s disease (AD) however, the jury is still out. Episodic memory impairment constitutes the inaugural and most long-lasting prevailing symptom in AD. However, cognitive impairments in AD start insidiously and evolve progressively. Patients therefore experience a transient phase during which cognitive deficits are detectable, but are not of sufficient severity to meet the criteria for AD. This transient phase is called amnestic mild cognitive impairment (aMCI).

Fig. 1. Illustration of the memory task. The incidental encoding phase was divided into two parts, each lasting roughly 7 min, during which participants had to determine whether the adjective displayed described them (self-referential condition) or a celebrity (other-referential condition), or whether it was a positive adjective or not (semantic condition). Adjectives were displayed on a screen one at a time for 3500 msec, followed by a fixation cross for 1000-3000 msec. Participants answered “Yes” or “No” with their right and left index fingers (counterbalanced across participants) using keypads. They were reminded of which side corresponded to which answer at the bottom of the screen. The recognition phase came immediately after the incidental encoding session. Previously encountered adjectives (old ones) were mixed with distractors (new ones). Presentation of the adjectives was similar to that of the previous session (adjectives were presented on a screen one at a time for 3500 msec). Participants had to decide whether or not they had already seen each adjective during the incidental encoding session.

To date, no study had yet investigated the SRE in aMCI. As positive information involving the self enhance memory, and referencing the self implies subjective representations, we set out to examine both the effects of emotional information and self-esteem on the SRE across the early stages of AD.  Twenty healthy older individuals and 40 patients (20 diagnosed with aMCI and 20 diagnosed with mild AD) performed a memory task. Participants had to judge positive and negative trait adjectives with reference to themselves (“Does this word describe you ?”) or to another person (“Does this word describe the French President ?”), or else process these adjectives semantically (“Is this word positive ?”). We then administered a recognition task. Participants also completed a questionnaire assessing their self-esteem. Among healthy older individuals, the SRE benefited memory independently of traits and self-esteem valence. By contrast, among aMCI patients, we only observed a SRE when the traits were positive. When self-referred traits were negative, patients’ memory depended on the valence of their self-esteem: negative self-esteem was linked to poor memory for negative self-referred traits. Finally, memory performance of patients with mild AD were too low and inappropriate to be subjected to relevant analyses. 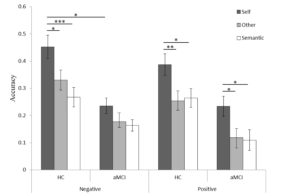 Fig. 2. Mean accuracy scores (memory performance) for negative and positive adjectives encoded with reference to the self or a distant other, or processed semantically, for healthy controls and patients with amnestic mild cognitive impairment. Error bars indicate standard errors of the mean (SEMs). *p < .05. **p < .01. ***p < .001.

The positivity effect reflects the fact that people pay more attention to positive information, and tend to remember more positive memories as they grow older, which contributes to well-being. The persistence of an SRE for positive traits in aMCI suggests the existence of such a positivity effect for self-related information, regulating patients’ emotion and well-being. The absence of an SRE for negative traits, which led aMCI patients to dismiss negative self-related information, could be due to low self-esteem. These results corroborate the mnenic neglect model, stating that feedback that are negative for central self-aspects are self-threatening. They trigger a self-defense mechanism whereby negative information related to the self is poorly recalled, compared with negative information related to another person for instance. All in all, our study point out the importance of the psychoaffective dimension in patients with aMCI and mild AD, which could constitute a major factor for the preservation of their self-esteem and self-related memory.