Gene sequencing as a novel tool for diagnosing Loeys-Dietz syndrome 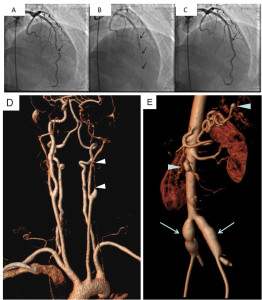 Fig. 1. Coronary angiography (A -C) showing a tight narrowing of the left anterior descending coronary artery (A, arrow), (B) a tear (dissection) of the coronary artery progressing to total occlusion upon passage of the guide-wire (B, arrows), and successful recanalization after stenting (C, arrow). Magnetic resonance angiograms with 3D reconstruction are shown in panels D – E. A long dissection of the left internal carotid artery was seen (D, between arrowheads), aneurysms of both common iliac arteries (E, arrows), and aneurysms the of superior mesenteric artery (E, lower arrowhead) and of the splenic artery were found (E, upper arrowhead).

Vascular disease is very common and usually follows well known patterns that physicians are thoroughly familiar with. However, from time to time doctors are confronted with »difficult cases« that do not follow usual patterns.

A 35-year old female without previous medical problems noted occasional blurred vision in her left eye during her 3rd pregnancy. After delivering a healthy baby by cesarean section, profuse vaginal bleeding occurred from the uterine wound, requiring surgical intervention. Two days later the patient experienced chest pain due to an acute myocardial infarction. A spontaneous tear of the left anterior descending coronary artery was found on coronary angiography and was managed by placing a stent into the affected vessel. Soon afterwards, the patient’s visual symptoms recurred and a tear of the left internal carotid artery, the one supplying blood to the left hemisphere of the brain, was found. The patient recovered without neurological symptoms or heart failure, but her diagnosis was unclear. On magnetic resonance angiography bulges (aneurysms) were found in the pelvic arteries, in an artery supplying the intestine and in the splenic artery.

Pregnancy is a known risk factor for spontaneous arterial tears (dissections), but the patient also had vascular aneurysms. What was her underlying disease? Was it one of the rare genetic vascular diseases involving connective tissue? 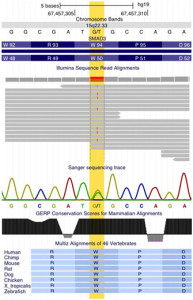 Fig. 2. The patient’s leukocyte DNA was subjected to next generation exome sequencing. A novel mutation of the SMAD3 gene was found in an important part of the gene that has remained unchanged during evolution and is the same in zebra fish, chicken, mice, dogs, chimpanzees and humans. The mutation implied the diagnosis of the rare genetic disease Loeys Dietz Syndrome type 3.

When rare genetic disorders are in question, physicians have recently been offered a powerful new diagnostic tool at an affordable price. It is a new way of genetic testing, called next generation exome sequencing. The method involves rapid (massively parallel) analysis of the 1% of human DNA that codes for proteins, which is called the exome. Mutations in the exome are much more likely to cause clinical consequences than mutations in the 99% of DNA that does not code for proteins. Of course, the genetic data have to be analyzed by powerful computer algorithms in order to make sense of the obtained information.

In our case, we found a new, previously unknown missense mutation in an important part of a gene (the SMAD3 gene) which regulates the development of connective tissue. Mutations in the SMAD3 gene are associated with a very rare disease called Loeys Dietz Syndrome type 3. There are usually no external manifestations, which would alert the physician to the diagnosis, until the patients suffers vascular tears. The disease may be transmitted to children who have a 50% chance of inheriting the affected gene. One of the patient’s three children was found to be a carrier of the mutation in the SMAD3 gene. Establishing the correct diagnosis by next generation exome sequencing is not only of academic interest, since proper care depends on knowing which disease we are dealing with. Patients may benefit from adequate blood pressure control and from periodic vascular imaging (yearly magnetic resonance angiography from the head to the pelvis) that enables physicians to decide on surgical intervention before a vessel ruptures. Also, the patients’ offspring may be tested for the disease and offered comprehensive care before suffering catastrophic vascular complications.