Serotonergic drugs in the treatment of symptoms in Alzheimer’s disease

Alzheimer’s disease is a neurodegenerative disease showing alterations in neurotransmitters, above all in brain regions responsibles for cognition and emotions. In this disease, an imbalance between neurotransmitters, acetylcholine, GABA, glutamate, noradrenaline and serotonin are included. In brain examinations, serotonin levels and the specific receptors are found to be decreased.  In the hippocampus and prefrontal cortex, serotonin levels are associated with cognitive functions, whereas in the brainstem serotonin levels are related with symptoms of mood, for example depressed mood. Psychotic symptoms, i.e. paranoia or hallucinations which can occur in patients with Alzheimer’s disease are associated with dopamine and serotonin hyperactivity in brain regions responsibles for memory and emotions, i.e. the mesolimbic system and hippocampus. 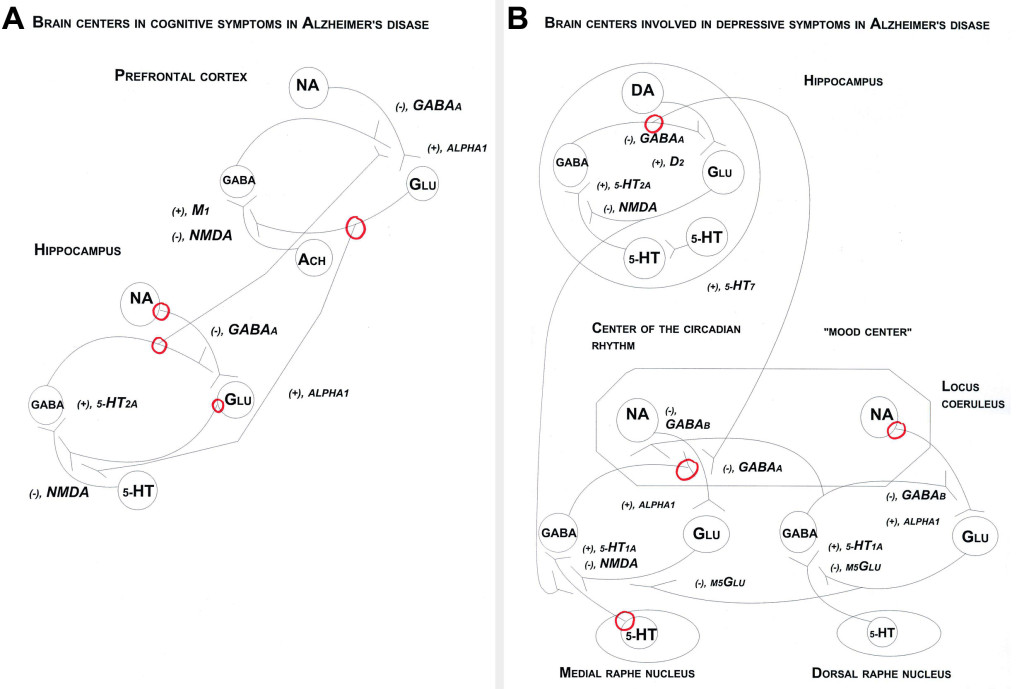 Fig. 1. A. The interactions between neuronal cells containing the neurotransmitters acetylcholine, GABA, glutamate and serotonin in the brain region hippocampus and cortex in patients with Alzheimer’s disease. B. The interaction between the neuronal cells containing the neurotransmitters dopamine, GABA, glutamate, noradrenaline and serotonin in the brainstem and the hippocampus in depressed patients with Alzheimer’s disease.

The interaction between classical neurotransmitters and their specific receptors is shown in different brain areas. In clinical trials, the therapeutic effects of drugs interfering with specific receptors of serotonin have been examined to improve cognitive symptoms in Alzheimer’s disease. In these trials, drugs activating the serotonin receptor 5-HT4 and drugs blocking the serotonin receptor 5-HT6  showed a significant better effect in improving cognitive functions than placebo. The effect of such drugs on the formation of protein depositions is also examined. The appropriate use of antidepressant and antipsychotic drugs with an interaction with specific serotoninergic receptors is pointed out. Serotonin-selective antidepressant drugs significantly improve depressant symptoms and daily activities in Alzheimer patients and they are used to treat aggressive behaviour. Among the drugs to treat paranoia and hallucinations, drugs which do not raise blood pressure, glucose and cholersterol levels very much, should be preferred.