Serotonin ( 5-HT ) is a neurotransmitter, which plays major roles in several physiological functions including circadian rhythmicity, appetite, thermoregulation, nociception, emotion and cognition. The relationship between 5-HT and sleep was demonstrated by several experiments, including in particular an elegant one, in cats rendered insomniac following the injection of a 5-HT synthesis inhibitor. In this model, the preoptic area of the hypothalamus containing the ventrolateral preoptic area (VLPO) was the only brain region in which small doses of 5-HT could restore long periods of sleep. 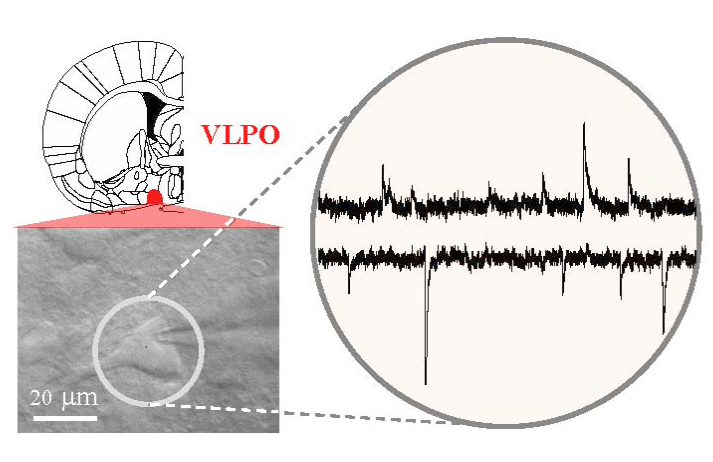 Fig. 1. Electrophysiological recordings of a sleep-promoting neuron in the VLPO (in red).

However, despite the discovery of some basic neurobiological concepts, mechanisms involved in the physiological role of 5-HT on the behavioral state remain largely unknown. Yet, the characterization of this physiological regulation represents a challenge for modern neuroscience. Insomnia is one of the most frequent sleep disorders affecting 10–30% of the population. In addition, cumulative effects of sleep loss and sleep disorders have been associated with a wide range of deleterious health consequences, including an increased risk of hypertension, diabetes, obesity, depression, heart attack and stroke. It is thus crucial to properly identify the neurobiological processes responsible for sleep onset.

In our paper, the mode of action and the effects of 5-HT were determined in the VLPO, the main neuronal structure triggering non-rapid eye movement (NREM) sleep. This structure forms reciprocal inhibitory connections with wake-promoting structures and mostly receives serotonergic inputs from innervations by the dorsal raphe nucleus. In mouse acute VLPO slices, sleep-promoting neurons were shown to be either inhibited (Type-1) or excited (Type-2) by 5-HT application. Spontaneous excitatory and inhibitory postsynaptic currents in response to bath application of 5-HT were also recorded (Fig. 1). We established that 5-HT reduces frequencies of theses events to Type-1 neurons, whereas 5-HT selectively increases the frequencies of inhibitory postsynaptic currents in Type-2 VLPO neurons. We further determined that Type-1 neurons are less excitable and display a smaller somatic cell size than Type-2 neurons.

Altogether, our results established electrophysiological, morphological and molecular differences between these two neuronal types of sleep-promoting neurons. Type-2 neurons being more excitable, they could likely integrate the homeostatic drive of sleep and first respond to the serotonergic excitatory signal. Then, their activation could decrease the frequency of inhibitory inputs to Type-1 neurons to favor their activation. Type-1 VLPO neurons would then inhibit arousal systems and allow the maintenance of NREM sleep (Fig. 2). 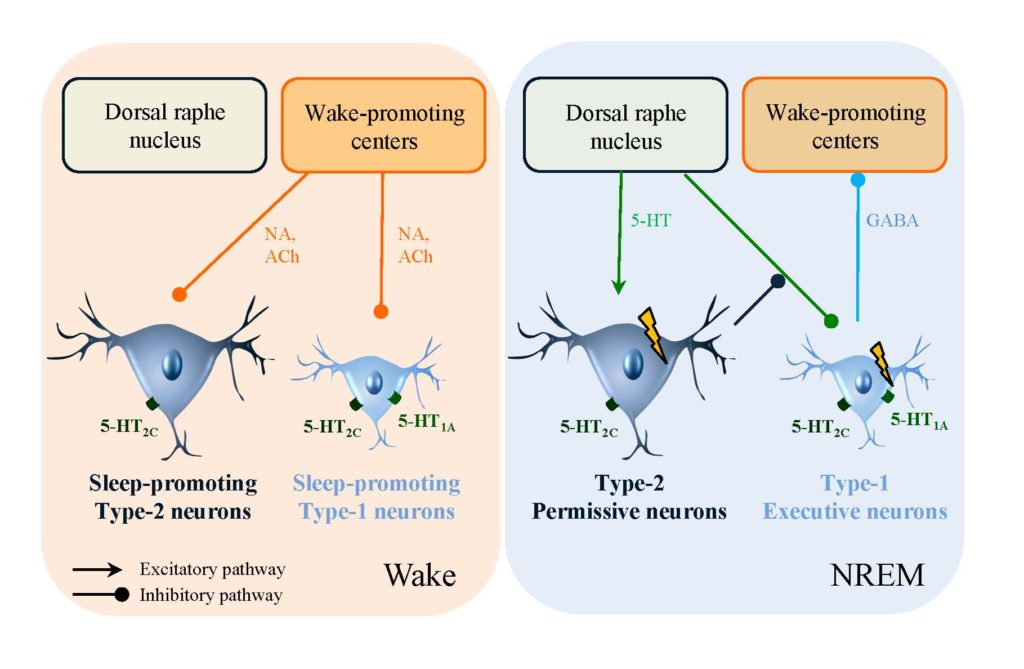 This work provides new insights regarding sleep regulation by 5-HT and propose that Type-2 neurons could be involved in the preparation and initiation of sleep (permissive neurons), whereas Type-1 neurons are likely responsible for sleep maintenance (executive neurons). We established that sleep-promoting neurons frequently express 5-HT2C receptors that could represent a molecular target for the development of safer and more effective sleep-promoting medication to treat insomnia and to improve quality of life.