Cytokines are involved in various pathophysiological processes of macroorganism, including regulation of immune response and inflammation. Numerous experiments have demonstrated that cytokines, necessary in small doses, may result in the development of “cytokine storm” when produced in excessive quantities. The most severe form of streptococcal disease – invasive streptococcal infection (ISI) – is characterized by the excessive production of cytokines. Superantigens of group A streptococcus (GAS) – M protein and pyrogenic exotoxins – located both on microbial cells and secreted into the medium, are potent cytokine inducers. The cytokine profile in sera of CBA mice in response to single injection of supernatant of GAS 1M and 3M type cultures  (the most often isolated in ISI), Prague collection, as well as strain Dochez NY5 (type 10M, American collection, a potent producer of erythrogenic toxin A) was studied. Streptococci were grown for 18h on Todd-Hewitt broth at 37°C. Broth culture was centrifuged for 15 min at 3000 rpm. Supernatant was filtered through 0.22 μ Millipore filter and injected to mice intraperitoneally in a volume of 0.5 ml. Blood from mice was collected 1,5 and 24 h after injection. Cytokine concentrations were measured on a Bioplex analyzer using kits that allow measuring of following cytokines in picograms: IL-1β, IL-2, IL-5, IL-10, IL-12, IFNγ, TNFα and GM-CSF. 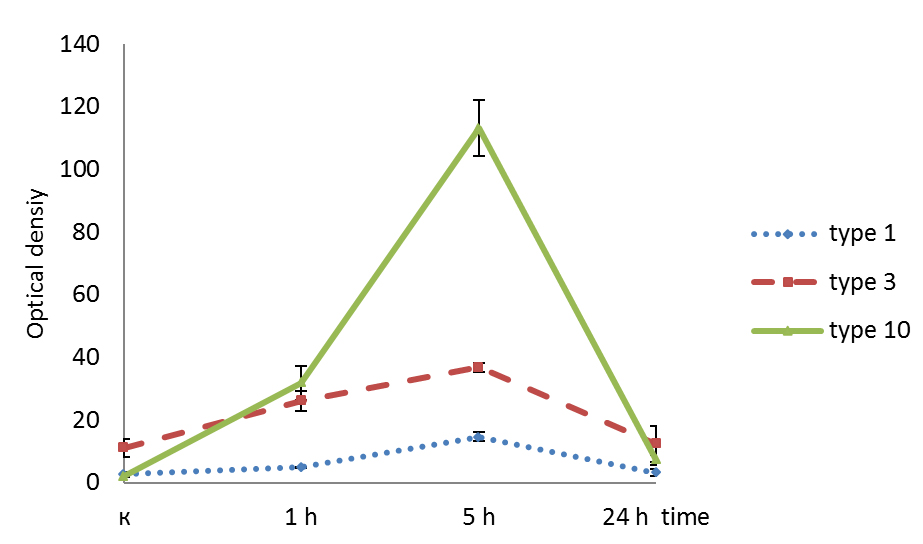 Fig. 1. The level of IL 2 in mouse serum after injection of supernatants of GAS type 1M,3M,and 10M (strain Dochez NY5).

After administration of supernatant of GAS type 1M little changes of cytokines were observed in 1 h . The cytokine content reached a maximum in 5 h after injection. The level of IL-2 increased most markedly – by 5 times, IFNγ by 3 times, TNFα and IL-5 by 1.6 times in comparison with control. In 24 h the level of most cytokines decreased to the control level or lower except for IL-2 and IFNγ (excess by 1.2 and 1.8 times, respectively). Injection of type 3M supernatant led to the increase of IL-2 concentration by 2.3 times in 1h and in 3.3 times in 5 h. The levels of GM-CSF, IFNγ and TNFα slightly increased in 1h. A 3-fold increase in the content of IFNγ was observed  in 5 h after injection. In 24 h the level of almost all cytokines was below the control. After administration of Dochez NY5 strain supernatant the level of most cytokines increased 1.2-2.3 times in 1 h. The most pronounced increase – by 16 times- was observed for IL-2. In 5 h the level of IL-2 continued to increase –by 51 times in comparison with the control. The level of IL-5 also significantly increased – by 8.9 times. High levels of these cytokines persisted over 24 h (by 3.5 and 2.3 times, respectively). Concentration of other cytokines decreased below the control level.

Thus the results of our experiments indicate that single intraperitoneal injection to mice of GAS supernatant of all three types caused the increase of cytokine content in 1-24 h. The level of IL-2 increased most significantly, the highest values were recorded after injection of supernatant of strain Dochez NY5. The data indicate the involvement of extracellular GAS superantigens in the development of inflammatory process in streptococcal infection.

T. A. Danilova, G. A. Danilina, A. A. Adzhieva, A. G. Minko
N.F.Gamaleya National Research Center of Epidemiology and Microbiology, Ministry of Health of RF, Moscow, Russia