Historically, research about reproductive hormones like estrogen has focused on reproduction and reproductive behaviors. Certainly, this focus is understandable; however, it is becoming increasingly obvious that estrogen plays a broader role . In fact , estrogen profoundly impacts the quality of life, for better and worse, and in ways that have little to do with reproduction. To illustrate, estrogen delays the onset of Alzheimer’s Disease, but may predispose women to depression. The central nervous system (CNS) effects of estrogen in these complex cognitive disorders are incompletely understood, though the human and financial costs are painfully clear. Less obvious, perhaps, is the influence of estrogen on day-to-day functions that also impact quality of life—seemingly mundane processes like salt consumption and body sodium regulation. Mounting evidence implicates CNS actions of estrogen in these processes, though here, too, the effects of estrogen are incompletely understood. 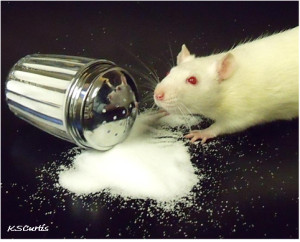 Interestingly, the effect of estrogen on salt consumption, and thereby on body sodium regulation, may be related to alterations in the perception of salt taste. In our initial studies, we found that gustatory nerve responses to salt solutions are blunted in rats with estrogen compared to those without estrogen. This exciting finding suggests some fundamental sex differences in the way the ‘taste world’ is experienced. But we were left with questions about whether differences in salt taste processing had consequences for the behavioral and physiological adaptations to body sodium challenges. In short, does estrogen have global effects to alter the regulation of body sodium, or do females maintain sodium balance despite the ‘self-administered salt load’ resulting from increased salt intake that follows changes in the perception of salt taste?

In studies to address this question, we found that estrogen-treated rats did not drink enough water to dilute the salt load incurred by consumption of concentrated salt solutions. This finding suggests that estrogen decreases the sensitivity to the taste of salt; however, when the salt was administered, rather than voluntarily ingested, estrogen enhanced the drinking response. Importantly, this enhanced response was accompanied by reduced activity in CNS areas involved in controlling the sympathetic nervous system, and blood pressure, more specifically. Together, these findings may indicate that estrogen has CNS effects to increase sensitivity to a salt load that could be protective in the face of elevated body sodium.

Given that maintenance of appropriate body sodium levels is critical for processes including blood pressure regulation, cellular metabolism, and neural function, we then asked whether the effects of estrogen extended to decreased body salt. Estrogen altered behavioral responses to sodium depletion, suggesting increased sensitivity to decreased body sodium, as well as to increased. However, activity in CNS areas associated with the detection of changes in body sodium did not depend on estrogen. In fact, whether or not they had estrogen, female rats exhibited reduced activity in these areas compared to males. Together, these findings suggest an interesting possibility: estrogen surges early in development determine CNS sensitivity to body sodium challenges, but adaptive responses to such challenges are altered by estrogen fluctuations that occur in the adult.

In summary, these studies suggest that, in addition to its role in reproduction, estrogen has CNS actions that influence body sodium regulation. The implications of these studies for human health are evidenced by the connections between dietary salt and blood pressure. Thus, the protective effects of estrogen in the face of fluctuations in body sodium levels have enormous clinical implications for hypertension among postmenopausal women, particularly given the aging of the world’s population. In the final analysis, then, it’s not just about sex; it’s about quality of life.