Climate models for the future generally agree that globally, tropical cyclones will become more intense but less frequent in the 21st century. Projections on the regional level, however, vary greatly and have large uncertainties. For the North Atlantic Basin, the main uncertainties are due to the chaotic nature of the climate system and to our limited understanding of how tropical cyclones – known as hurricanes in the U.S. – respond to changes in the atmosphere’s energy budget. Such changes in the energy budget can be caused by greenhouse gas emissions, but also by changes in the strength of the sun’s radiation.

Fig. 1. South Florida slash pine section from Big Pine Key, Florida Keys, U.S. Growth of the tree is from right to left. ‘Bands’ of narrow growth years can be detected throughout the section and represent the growth suppression caused by hurricane disturbance (strong winds, storm surge).

Pine trees on the Florida Keys can grow up to 250 years old, but are intolerant of salt and strong winds can cause branches and needles to break off the trees.  Thus, when hurricanes pass near to the Florida Keys, strong winds and storm surges cause the pines to grow less and to form narrow growth rings.

We compared the Florida Keys tree-ring record to a shipwreck record, consisting of Spanish ships that wrecked in the Caribbean due to storms or unknown causes during the hurricane season from July through November.  We narrowed in on the Spaniards since they were the first to make the transatlantic voyage in 1492 and thus provided the longest available shipwreck record.

When comparing the 330-year long shipwreck record to the Florida Keys tree-ring record, we discovered that the trees formed narrow rings not only in known hurricane years, but also during years when many ships wrecked in the Caribbean. We thus discovered a way to reconstruct Caribbean hurricanes back to 1495.

Our next discovery jumped out at us when we plotted the combined shipwreck and tree-ring data over time. We noticed a very distinct low in the number of shipwrecks from 1645 to 1715, a period known as the Maunder Minimum.

Sunspot activity – and thus the amount of solar energy that reached the Earth – during the Maunder Minimum was at its lowest over documented history, resulting in a period of cool temperatures in the Northern Hemisphere. By using shipwreck rates as a proxy for past tropical cyclone activity, we found that the cool temperatures of the Maunder Minimum coincided with a tropical cyclone drought. But why? 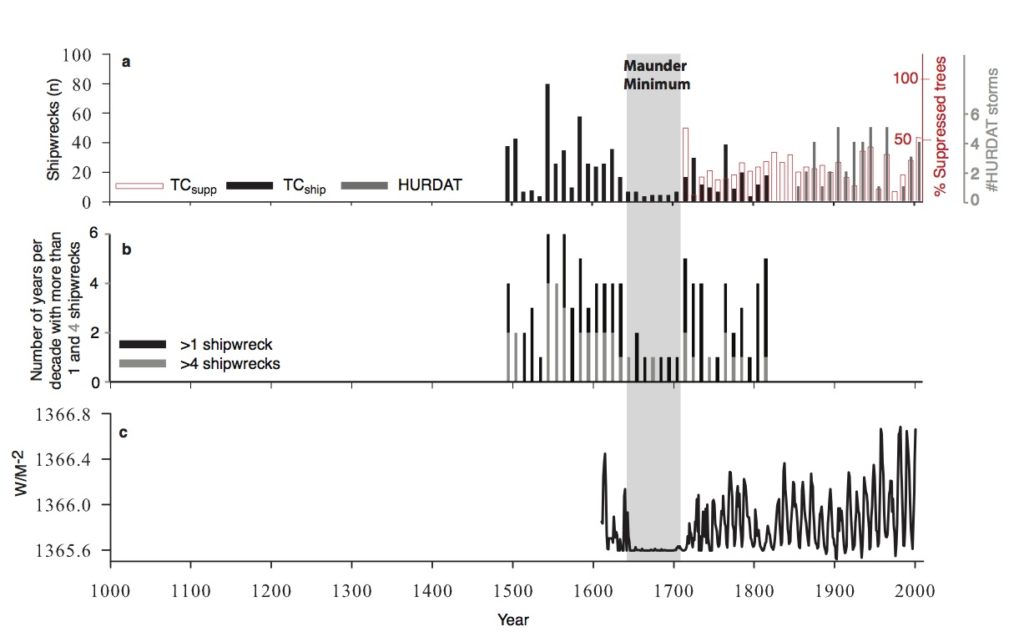 Our study provides information on how Caribbean tropical cyclones respond on decadal time scales to changes in the atmosphere’s energy budget. When looking at model projections for the 21st century, these decadal time scales are of crucial importance.

We know that with more densely populated coastal areas, sea level rise, and stronger storm surges, 21st-century tropical cyclones will become increasingly destructive and costly. By providing insight into hurricane dynamics of the past, we aim to give climate scientists better tools for predicting how climate change will affect hurricane intensity and frequency with more regional accuracy.