Shortness of breath from exercise: facts and fiction

Fig. 1. 14 y.o. boy having his heart and lung function exmamined while running on a treadmill.

Unfortunately, there have been publications suggesting that pulmonary function testing can answer the question. As little as a 10% decrease in a common measurement of lung function has been suggested to indicate the presence of exercise-induced asthma, even in the absence of symptoms. Other studies have suggested that symptoms of shortness of breath with exercise can be studied by evaluating if lung function falls after vigorous exercise. If such a test fails to show a significant fall in measured lung function, then the assumption is made by some that there is an abnormality of vocal cord function. However, the only valid manner to answer what is happening when exercise causes excessive shortness of breath is to measure the physiology of lung and heart function during exercise that is sufficient to reproduce the symptoms experienced.

That has been done in a publication in the Medical Journal, Annals of Allergy Asthma and Immunology in 2005, included in an extensive review of the subject in the Pediatric Clinics of North American in 2009, and described further this year in an invited editorial in the journal, Respiratory Care. By running on a treadmill sufficient to reproduce symptoms while heart and lung function are measured, the cause of shortness of breath of present at the time can be identified (Fig. 1).

When these studies were performed in 120 pre-adolescents and adolescents who were concerned about excessive shortness of breath during exercise, the explanation for their shortness of breath could be accurately diagnosed (Fig. 2). This permitted appropriate treatment and counseling to manage the problem. While about 100 of these 120 individuals had been previously diagnosed as having exercise-induced asthma and been given medication for that, only 11 of the 120 had evidence for actual asthma as a cause of their shortness of breath with exercise. Fifteen had abnormities of vocal cords that interfered with intake of air. Fifteen had minor abnormalities of their chest wall that inhibited maximal breathing, one hyperventilated at the onset of exercise, and one had an arrhythmia of his heart only present during vigorous exercise. The other 74 in whom their symptoms were reproduced during the treadmill exercise were shown to have normal limitation of exercise. 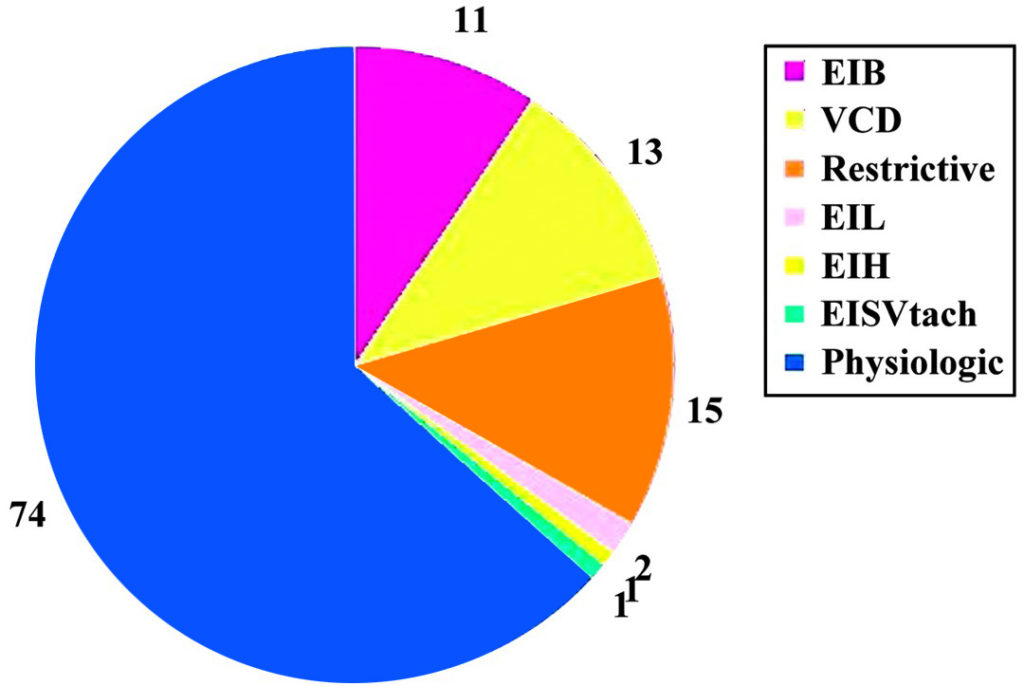 Normal exercise limitation occurs when the demands of energy from the muscles exceeds the ability of the heart and lungs to deliver oxygen to those muscles. The muscles then begin to utilize other means of developing their energy that does not require oxygen. That results in a substance called lactic acid.  When the level of that acid in the body becomes sufficiently high, it stimulates breathing, eventually to an extent that can’t be maintained. That makes the individual feel progressively short of breath. Explaining normal exercise physiology to those 74 provided them with an understanding that a combination of conditioning and training could enable them to manage their problem without medication.

Exercise-induced dyspnea in children and adolescents: if not asthma then what?
Abu-Hasan M, Tannous B, Weinberger M
Ann Allergy Asthma Immunol. 2005 Mar