One of the major concerns related to the newly synthesized drug is poor water solubility, which seems to be a major concern for the pharmaceutical manufacturer and also a rate limiting step in the bioavailability. In this research, nanoparticles of Etoricoxib has been synthesized, drug that belongs to the BCS class II with insignificant solubility utilizing the newly developed solvent-antisolvent method assisted through ultra-sonication. Nano-precipitates has been formed using this method and to stabilize the drug nano-precipitate, Neem (Azadirachita indica, Family: Meliaceae) gum polymer (NGP) and its semisynthetic derivatives for instance, carboxymethyl derivative of neem gum (CMNGP), acrylamide graft copolymer of neem gum (NG-g-Am). The effect of two independent variables drug concentration and polymer over the size and entrapment efficiency which is dependent variables of nanoparticles has been evaluated utilizing the response surface methodology based on 32 factorial design. 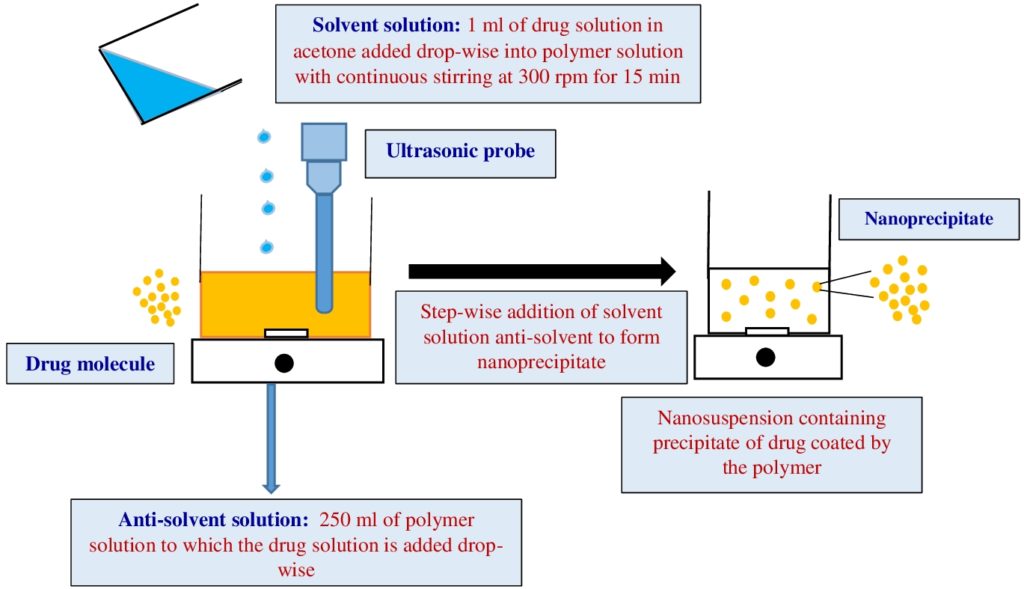 The neem gum copolymers thus formed has been characterized suchlike, FTIR, DSC, SEM. Solubility study has also been performed and determined using the double beam spectrophotometer. For characterization of these nanoparticles synthesized using NGP, CMNGP and NGP-g-Am as stabilizer and drug etoricoxib, physical appearance of the nanosuspension, particle size of the nanocrystals, surface morphology using SEM, entrapment efficiency (%) has been determined. Schematic diagram to show the preparation method of nanoparticles is shown as Figure 1. In this study, model dependent methods have been used to determine kinetics of drug release. To determine the effect of antisolvent on the particle size during storage, analysis of particle size growth was performed at regular interval of 7, 14, 30 and 45 days. From the IR spectra, it can be determined that molecular structure of NGP contains –C–O–CH3, cyclic ether and –CH2 region and due to the CH–O–CH2 group, a characteristic spectral peak at 1024 cm−1 appeared during the grafting reaction between the–OH group of NGP and the acrylamide π-bond, CMNGP shows characteristics peaks at 1065 cm−1. The results of DSC thermogram indicated theamorphous nature of CMNGP as compared to NGP and NGP-g-Am. In literatures, it has already been found that amorphous nature of polymer has better solubility than crystalline form. SEM images demonstrated smooth surface and fibrous nature along with presence of small pores that enhances solubility and better mobility of water molecules. Contact angle measurement showed that angle <90° indicates favorable wetting as well as spreading of liquid over surface whereas >90° indicates poor wetting and spreading of liquid. Effect of stabilizer concentration was determined which showed the presence of stabilizer significantly reduces the precipitate particle size, that at low concentration aggregation occurs as less molecules of stabilizers are available to form polymeric layerand in the same way, higher concentration results in formation of multilayer over precipitated particle. For the effect of drug concentration, it was noticed that particle size increases with increase in drug concentration. Entrapment efficiency (%) of prepared formulations has been found to be in the range of 94.32 ± 0.19 to 98.93 ± 0.50 %. Result indicates that evaporation controlled Solvent antisolvent method is used which is suitable for the formulation of drug loaded nanoparticles. Role of mixing and ultra-sonication showed the uniform distribution of particles and prevent agglomeration. Drug release was observed to be improved due to enhanced surface area of particles. Cross-linking and polymer hydrophilicity has significant effect over drug release.

From the results of drug release profile concluded that NGP-g-Am demonstrated more dissimilar release of drug than CMNGP. t90% of NGP (N9), NGP-g-Am (A8) and CMNGP (C1) optimized formulations were reported to be 249.46 min, 296.63 min and 223.39 min, followed by 1°, Higuchi and 1° order drug kinetics, respectively. Particle size growth analysis of Nanosuspension after 45 days was done and no any significant change in the nanoparticles size. From this research, it has been concluded that, neem gum polysaccharide and their derivatives can be utilized as drug delivery carrier. Neem gum polysaccharide and their semi-synthetic derivatives can be used to prepare nanoparticulte drug delivery carrier.