The chemical behavior of a transition metal is extremely different when compared with that of a characteristic main group element. The former is prone to remain cationic while the latter prefers to attain a closed shell electronic configuration by creating the required number of covalent bonds. Among the main group elements, the maximum number of chemical species of the universe contains carbon. Each carbon atom contains four orbitals and each of them can only accommodate two electrons. A carbon atom can form four bonds containing two electrons in each bonding orbital (Fig. 1.). Thus it possesses eight electrons at the outermost electronic shell which is the most stable electronic configuration. This is called the octet rule.

Fig. 1. Neutral and ionic compounds of carbon and silicon. They are not radicals.

The chemical species of carbon and silicon with a fewer number of electrons than eight is comparatively less stable. A divalent carbon atom with six valence electrons is known as carbene which could be either a singlet (when both the nonbonding electrons are paired: R2C:­↑↓) or a triplet (when both the nonbonding electrons are unpaired: R2C:­↑↑) carbene. In general, any species that contains unpaired valence electrons is known as a radical. Accordingly, between singlet and triplet carbenes, the former is a non-radical species while the latter is of a diradical type. The triplet carbene is much more reactive when compared with a singlet carbene which often acts as a two electrons donor. A chemical species with a carbon (e.g. R3C·­↑) or silicon atom (e.g. R3Si·↑­) having one unpaired electron is called a mono-radical which still needs an electron to fulfill the octet rule. Thus, triplet carbenes and mono-radicals are very reactive and short lived species. Radicals play very crucial roles ranging from the human physiological system to the interstellar medium of the universe. Many chemical and biological processes proceed via the formation of radical intermediates. Moreover, the ionizing radiation caused by ultraviolet rays of the sun can cause potential DNA rupture by means of generating highly reactive free radicals by breaking the molecular structure within the cell. This can eventually cause alarming skin cancer. More than a century ago (in 1900), the Russian scientist, Moses Gomberg first synthesized the carbon centered radical (triphenylmethyl radical; Ph3C·↑­) which was spectroscopically characterized four decades later and structurally characterized after six and half decades from his first report. Following this success, a large number of carbon centered radicals were synthesized. 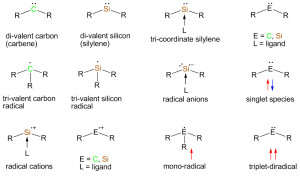 Most of the radicals are characterized by electron paramagnetic resonance (EPR) spectroscopy. Only a small fraction of radicals are long lived species and hence they are isolable and storable. These are called stable radicals which are additionally characterized by physical methods such as X-ray single crystal diffraction. Silicon, the second most abandoned element of the earth’s crust is the heavier congener of carbon. Synthetic covalent silicon compounds are often less stable than their carbon analogues because they easily undergo hydrolysis or rapidly react with the areal oxygen since silicon has the ability to expand its octet by forming more than four chemical bonds. Thus, the synthesis and isolation of silicon centered radicals are extremely challenging. Additionally, the synthesis of radicals containing silicon most often demands very different synthetic routes. This review summarizes some of the very important and unique syntheses for generating silicon based radicals and radical ions followed by their isolation and characterization techniques. Several chemical routes for the isolation of stable radicals have been developed. In a few cases the steric bulk of the adjacent ligand has played a significant role for the preparation of some of the radicals and radical ions (Fig. 2.) in unforeseen directions. It also highlights how an electron deficient singlet carbene can be utilized to efficiently stabilize silicon containing radicals. It also shows a few examples of short lived radicals which follow some unusual chemical pathways due to their low stability.