Silkworms turning your shirt into a cell phone battery

Feeding Bombyx mori larvae with nanostructured materials such as CNTs, graphene, TiO2 and other metal oxides have been investigated in recent reports. The feeding process proved that Bombyx mori larvae can intake nanostructured materials, which affect the crystallinity of the resulting silk. Feeding the worms with TiO2 was also proved to be nontoxic and even used with bacteria to enhance energy harvesting devices. However, most of the previous reports were limited to the investigation of the mechanical and photonic properties of such modified silk. Tailoring the properties of the natural silk (NS) to be used in electronic devices, energy generation, and energy storage devices is yet to be reported. Of special interest, flexible supercapacitors are emerging as promising platforms for energy storage. 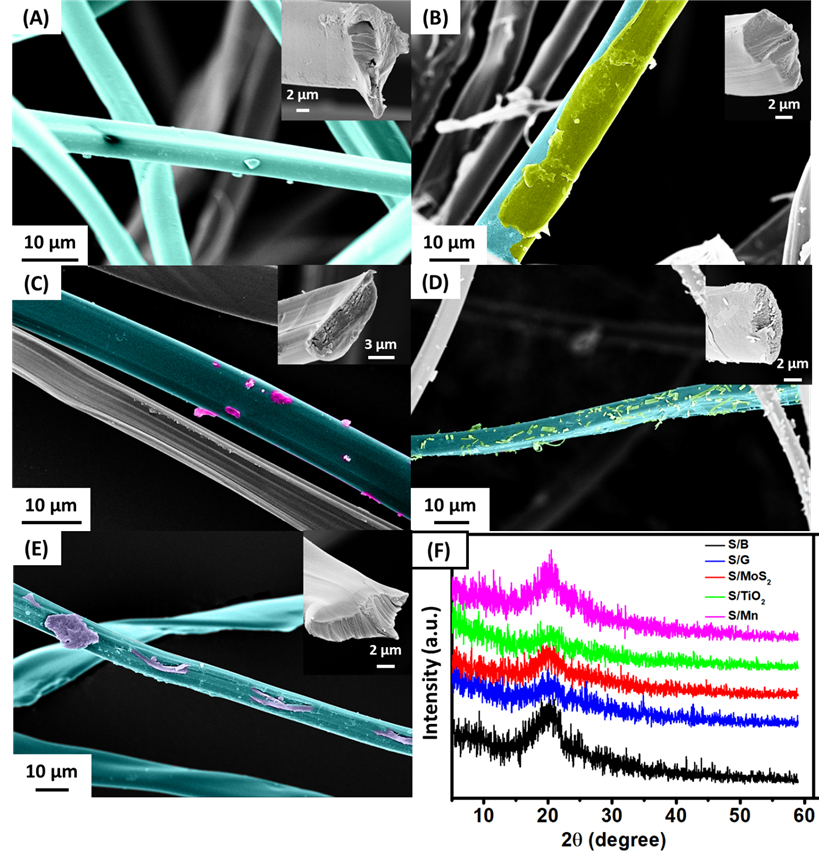 Herein, we demonstrate the ability to modify the structure and supercapacitive behavior of NS by feeding the Bombyx mori larvae with four different types of materials (graphite, TiO2 nanotubes, MoS2, and KMnO4/MnCl2) for use as supercapacitor electrodes. The study shows that modification of the NS enhanced its capacitive behavior, paving the way for their use in flexible supercapacitor applications.

All the studied silkworms started the feeding on their 5th instar and they did not reject the food. It was observed that the larvae fed with MoS2 were eating more than usual while the ones fed with KMnO4/MnCl2 were eating in a lower rate than usual. The larvae fed with graphite and TiO2 did not show any unusual behavior in the feeding process. While the Cocoons of the blank fed larvae were of homogeneous size and white color, the chemically-modified ones showed a non-homogenous size and off-white color.

The morphology of the silk fibers was investigated using FESEM imaging as shown in the figure. The fed materials appeared as debris on the surface of the fibers and/or within their internal fibroins. The elemental composition of the fibers was studied using the EDS technique. The resulted composition showed that the added material did not exceed 0.03 at% of the total atoms in the fiber, which is an accepted ratio due to the low concentration (0.5 wt% suspension) used in the diet. Although the EDS analysis showed a minor ratio of the added materials, the SEM images showed a major effect on the morphology of the resulted fiber. The investigation of the crystal structure of the silk was performed using XRD as presented. The XRD patterns show that all the resulted silk has a mesophase behavior. The mesophase structure of the silk is believed to facilitate the diffusion of ions to the internal parts of the silk fibers.

In summary, the study proved that natural silk that can be used as clothes fabric can be tuned for use in energy storage devices.