Sir Richard Owen and the sanitary reform in Victorian Lancaster

The Royal Society of Biology recently unveiled ten blue plaques across the United Kingdom to commemorate the renowned and sometimes uncelebrated champions of biology. This included a ceremony in honour of Sir Richard Owen (1804-1892) on the 26th February, at the Lancaster Royal Grammar School, East Road, Lancaster. Sir Richard Owen is a famous Lancastrian and became known as a passionate anatomist, palaeontologist, and geologist. He is best known for coining the term dinosaur from the Greek word “deinos”, which means “fearfully-great”. Owen was schooled in his town of birth at Lancaster Grammar School. He later (from 1820 onwards) became an apprentice to three of Lancaster’s surgeon-apothecaries. It was during this period that his love for anatomy was kindled and it is believed that he gained extensive skill in the study of anatomy and dissection at the medieval castle in Lancaster. The castle served as the local prison at the time of Owen’s apprenticeship, from 1820 to 1824, and this period also coincided with a total of 19 executions by hanging. The Murder Act 1752 preceded the Anatomy Act of 1832 and stipulated that executed murderers could be used for anatomical dissection. His academic career would successively continue to develop in Edinburgh and later in London where he would later play a crucial role in England’s Sanitary Reform. 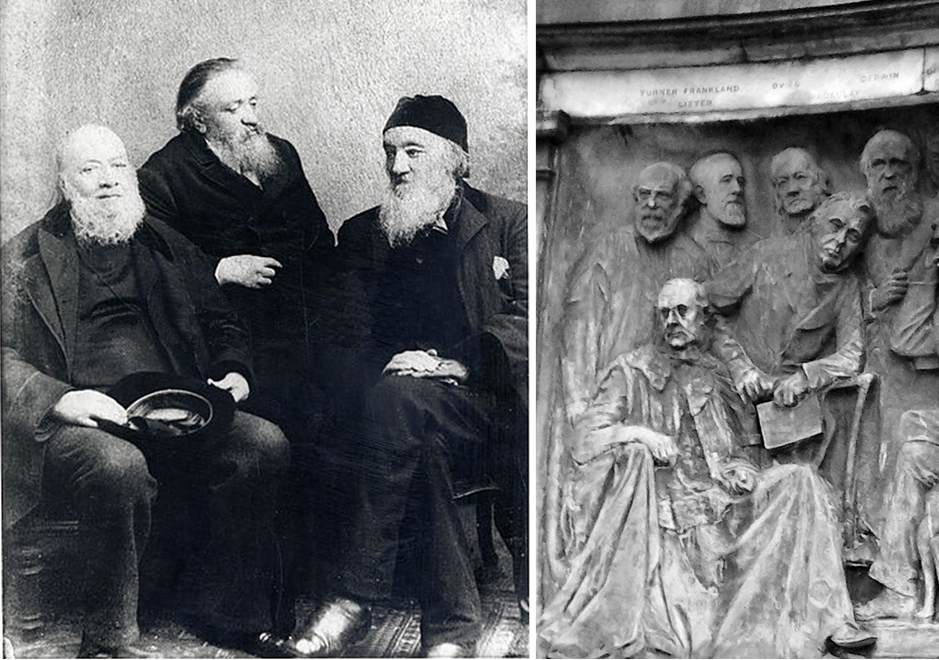 Fig. 1. Left: Sir Richard Owen (right) among the great sanitarians of Victorian England, Sir Edwin Chadwick (1800 –1890) (left) and Sir Benjamin Ward Richardson (1828-1896) (middle). Right: One of a series of panels upon the pedestal of the Victorian statue, Dalton Square, Lancaster. The panel portrays the pioneers of science and medicine and Sir Richard Owen (third from the left in the background) is depicted alongside William Turner (another Lancastrian), Charles Darwin and Joseph Lister.

Cholera, one of the greatest threats to public health in the nineteenth century, reached England in the summer of 1831 and was formally recognized in October 1832. Cholera’s arrival in Lancaster via the trade routes coincided with the rapid increase in population, inadequacies in medical care, poor standards of sanitation and poor water supply. It was many people’s understanding that the miasma theory was the reason for communicable diseases such as cholera were caused by pollution or “bad air” emanating from rotting organic matter. Owen’s understanding of the main issues in Lancaster; the lack of household sewage systems and a clean supply of water, the intramural burial sites within the town presenting a means for their soakage to reach the wells. Houses within the poorest parts of the city used their cellars as a means to store waste, their construction and design meant that farmers looking to collect waste were unable to access the cellars. Waste would be left to fester, the smell was unbearable. Owen noted the streets and courtyards of the city were riddled with human excrement, this was made worse in the rain. He was approached on 17 April 1843 by Sir James Robert George Graham, (1792-1861), then Home Secretary, to serve on the committee, alongside Sir Edwin Chadwick (1800-1890), to investigate best practices for the management of sewerage. He frequently travelled between Lancaster and London in 1844, in the next few years he utilised his knowledge of disease, Lancaster and its issues to aid in the design of a “mode of best design and cheap house and street drainage.” Owen’s official report of 1845, to the Commission of Inquiry into the Health of Towns, recommended construction of a sewerage system within Lancaster, based on plans of his colleague, Edmund Sharpe (1809–1877) and for a new cemetery to be constructed and utilised away from the town where the soakage could not enter the wells. Owen’s work as an anatomist is well documented, his work on sanitary reform is less so, however the work he did in his hometown and the reforms he proposed were much wider ranging than Lancaster and preceded some of the more well-known changes and individuals that aided the larger cities of the nineteenth century.