Tumors are complex tissues composed by both non-cellular components, mainly matrix proteins, and different stromal cell types, which are under an active cross talk with tumor cells. Tumor-associated macrophages (TAMs) are the major leukocyte population among the tumor-infiltrating immune cells and they represent the major inflammatory component of the stroma of many tumors.

These TAMs are recruited early at tumor site where they promote tumor growth, switch to an angiogenic program, the resistance of tumor cells to apoptotic stimuli, tissue remodeling, invasion of tumor cells and the suppression of immune host response against tumor cells. 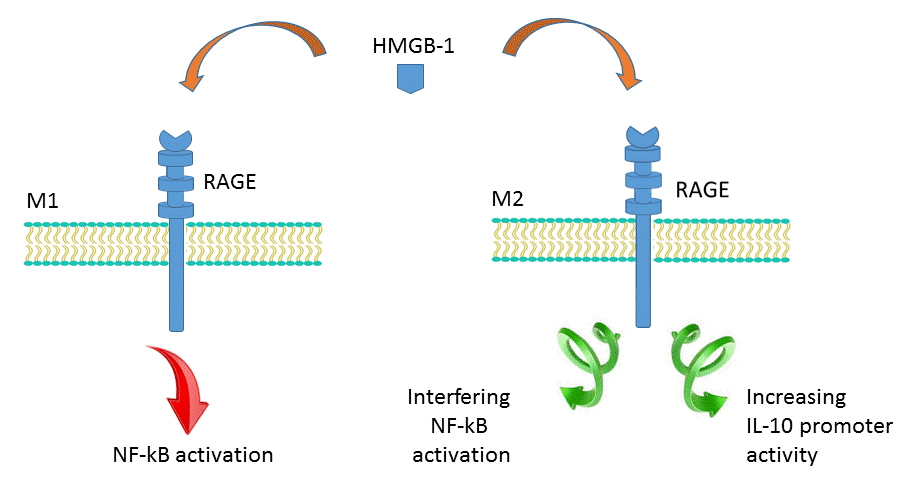 Fig. 1. Skewed signaling through RAGE in M2 macrophages results in both the interference of NF-kB activation and increased transcriptional activity of IL-10 gene.

It is known that TAMs acquire a specific phenotype (M2), oriented toward tumor growth, angiogenesis and immune-suppression. This M2 polarization is promoted by signals presented at the tumor microenvironment, which are produced by tumor cells and by TAMs themselves.

In the innate immune system, many receptor systems are capable of adapting their responsiveness to marked and sustained increases in the concentration of extracellular ligand(s) (as occurs in tumor microenvironment), thereby using these steady-state levels to generate appropriate negative feedback mechanisms that effectively shut down signal transduction

A compelling body of evidences supports the presence of tuning mechanisms in order to skew or restraint the inflammatory response of TAMs and thus forces them to function as active tumor-promoting immune cells.

Noteworthy, RAGE although  equally expressed in both M1 and M2 macrophages polarized phenotypes, the activation of this receptor  by the alarmin HMGB1, highly abundant at tumor microenvironment, promotes the protumoral activities of M2 macrophages based on their abilities to enhance tumor cell invasion and promoting angiogenesis. Thus, RAGE activation by HMGB1 in M2 macrophages has been drifted away from its classical activation-dependent proinflammatory response, widely reported in M1 macrophages.

The mechanisms involved in this skewed cellular response are associated with the induction of both the suppressor of cytokine signaling 1 (SOCS1) and the Src homology-2 domain-containing inositol 5-phosphatase 1 (SHIP-1), which are negative regulators of NF-kB activation. Additionally, a transcription-prone histone modification occurs at the IL-10 promoter gene, and this epigenetic imprinting correlates with increments of HMGB1-induce IL-10 production.

This study demonstrated that the activation of RAGE by HMGB1 has emerged as a new mechanism that is able to drift away the canonical proinflammatory signaling observed in M1 macrophages and thus strengthening the supportive tumor growth behavior observed in M2 macrophages.