In 2012, over 200 million cases of malaria have been reported. Vaccines for malaria are under development; however, no generally accepted vaccine that also works for adults is yet available. Therefore, drugs will in the foreseeable future further play an important role in preventing new infections and treating patients. Because of the surfacing of resistant malaria parasites, new drugs have to be developed periodically. Furthermore, some of the currently available and still very effective drugs have sometimes severe side effects. For instance, mefloquine, which has been used by the US military for a number of years, in some cases resulted in depression or psychotic attacks. 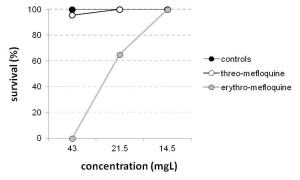 Fig. 1. Survival. The survival rate for both drugs is presented in dependence of the concentration.

Currently, many new antimalarial candidate drugs are under development. Besides assessing their therapeutic efficacy, it is crucial to test the drugs for potential harmful side effects. Because this is a time-consuming and expensive multi-stage process, it is of interest to exclude problematic candidates at an early stage in the development process. In that way, much time and resources can be redirected to more promising candidates. Here we present one such paradigm that is based on studying behavioral changes induced by those drugs in a small fish-model. Different fish species (such as zebrafish, medaka, guppy and goldfish) have emerged as successful model organisms for genetic, neurochemical, biopsychological and organ-pathological research.

We used juvenile goldfish to study survival and behavioral side effects after treatment with either erythro-mefloquine or threo-mefloquine. These are diastereomers, which means that these molecules only differ in the three-dimensional orientations of some atoms without being each other’s mirror images.  Erythro-mefloquine is the clinically used antimalarial drug.

For behavioral testing, it was crucial to first find a concentration of the drugs which did not result in decreased survival or gross-motor impairments (such as breathing or balance problems). Fig 1 compares the survival of goldfish treated with either drug. When the fish had to be euthanized because of severe impairments, they were counted as not having survived. Overall, erythro-mefloquine resulted in a lower survival rate. Only for the lowest dose (14.5 mgL), neither drug results in death or any other to the eye perceptible motor impairment. Therefore this dose was used for behavioral testing.

Behavior of the fish was recorded 24 hrs after they had been placed for 3.5 hrs in the drug solution. The test consisted of a three-dimensional open field test, i.e. a cube applying specialized 3D-tracking software. Both the overall travel distance and specifically the horizontal travel distance were reduced in the erythro-mefloquine group (Fig. 2). This group had also a tendency to freeze more and they spent more time in quadrant 2. From previous studies performed with zebrafish, we assume that staying in quadrant 2 might be a neophobic response.

Overall, our findings show that threo-mefloquine might have less adverse effects than erythro-mefloquine in goldfish. This does not necessarily mean that the same is true for humans. However, studies with other drugs performed suggest that both targeted and adverse drug effects in small fish have often a good predictive value for effects in humans. Furthermore, in vitro studies have shown that threo-mefloquine reduces the magnitude of pannexin-1 (a transmembrane protein) currents less and that its (-)-enantiomer had a lower affinity for the adenosine A2A receptor. Both effects might be related to the reduced adverse effects. Moreover, another in vitro study suggested that threo-mefloquine is more effective against some malaria strains. Animal models like the one presented here could provide a preliminary assessment for candidate drugs worthwhile further consideration. More specific behavioral tests could be added.