Small waterbodies as indicators of elemental pollution in urban sediments

The impact of urbanization and industrialization on sediment quality of large rivers and lakes have been widely studied globally, however, small waterbodies, such as ponds and canals, are rarely studied collectively. Ponds and canals that form a natural network within a city in most tropical countries, are widely used and in turn receive a large load of pollutants from various sources and are often prone to multiple elemental contamination at sites. Local impacts of urbanization can be better understood through this network due to limited transport of sediment in canals and the small catchment area of ponds. 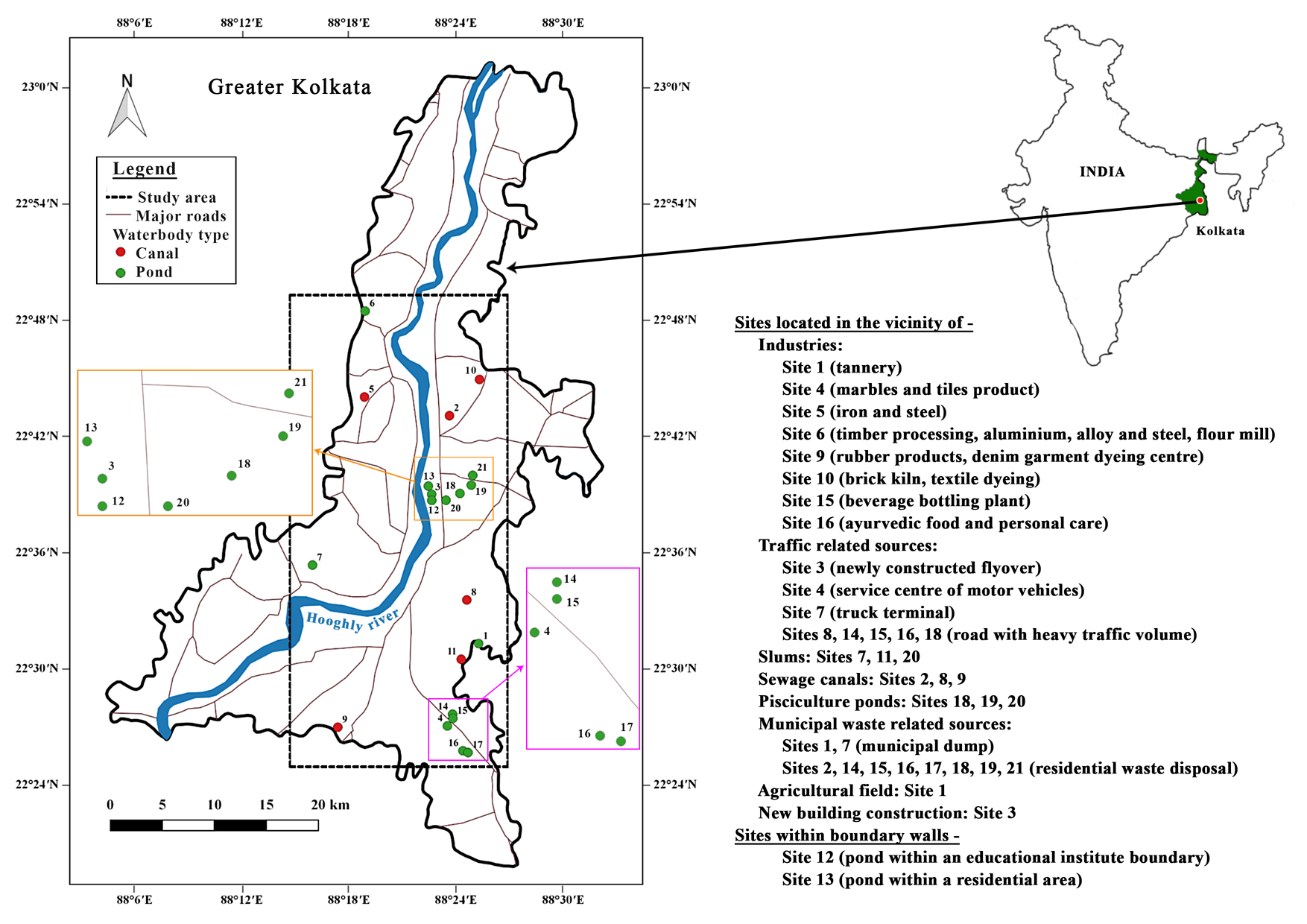 Fig. 1. Location of the waterbodies in urban city Kolkata along with a list of their probable contamination source

This study was undertaken to understand the status of elemental pollution and their associated ecological risk in sediments of 21 small waterbodies (15 ponds and 6 canals) in the city of Kolkata, India (Fig. 1). A constant influx of diverse contaminants from multiple sources such as industries, traffic-related sources, slums, sewage canals, pisciculture ponds, municipal waste-related sources, etc. find their way into such waterbodies in urban areas.

18 elements comprising abundant elements (Al, Ca, Fe, K, Mg, S, Si and Ti), trace elements (Ba, Mn, Sr and V) and ecologically toxic elements (As, Cr, Cu, Pb, Ni and Zn), from sediment of these waterbodies, were analysed. Minimum values for most elements were observed in site 13 which was located within a boundary wall and had no direct pollutant input source while maximum values for 5 elements were observed in site 6, a site with many industries in the neighbourhood. When compared with reference values, it was observed that sediment concentrations of V, Cr, Cu, Pb and Zn were elevated in the study region. The ecological risk for the toxic elements As, Cr, Cu, Ni, Pb and Zn, in terms of sediment quality guidelines, as found in this study are provided in Figure 2.

Green colour for As indicated no risk in all sites, Cr showed risk likely (red color) in maximum number of sites (86%), followed by Ni in 52% of sites, Cu and Zn in 6 sites and Pb in just 2 sites. Sites without any industry in the vicinity but close to road networks (e.g. sewage canal sites 2 and 8 and Sites 7, 11 and 20 surrounded by slums) also depicted risk likely for any three of the four elements Cr, Cu, Ni and Zn which is suggestive of other sources of contaminants. 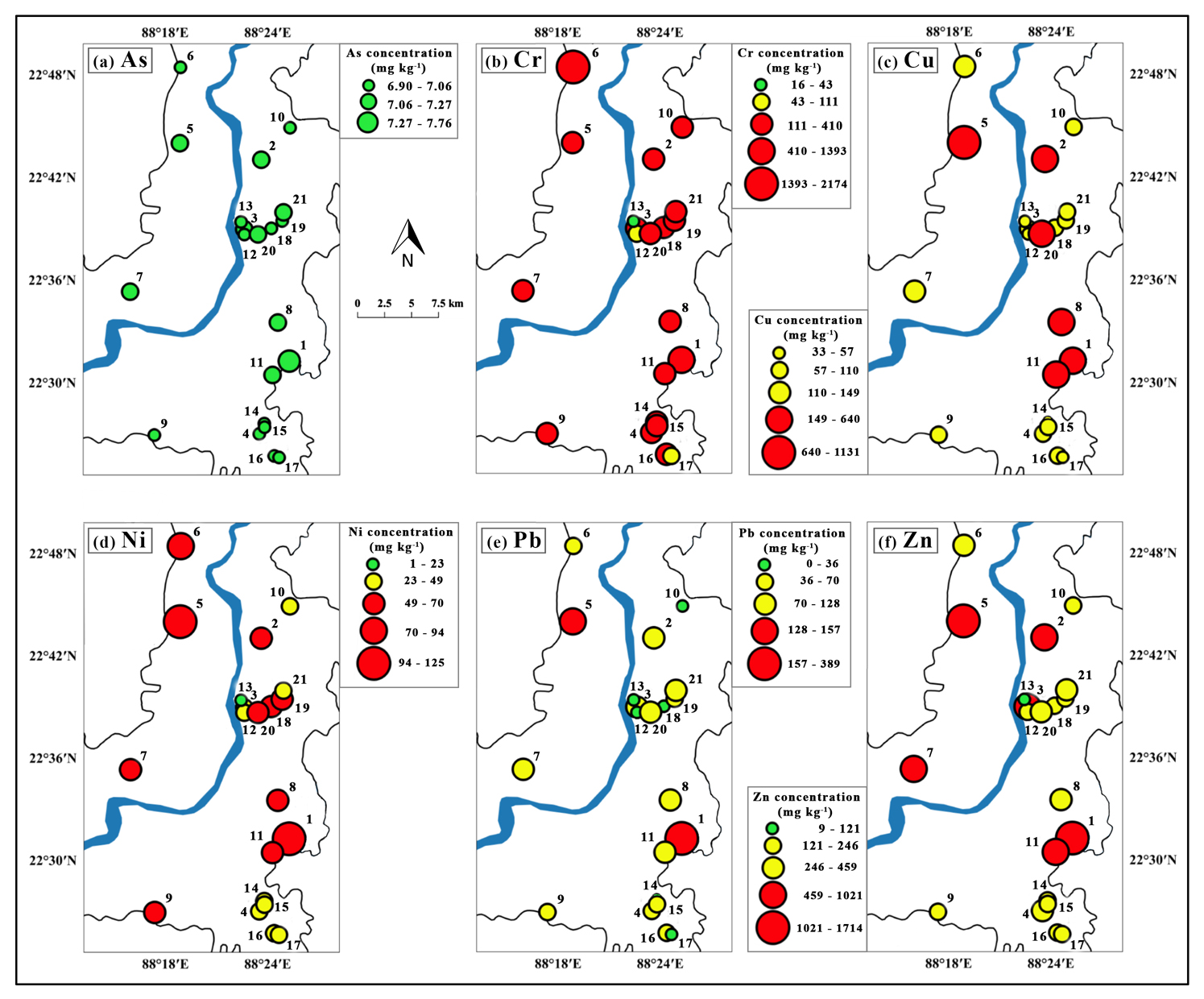 This case study highlights the ability of pond and canal networks to successfully identify multi-elemental sediment contamination from a variety of sources (e.g. industry, domestic, slum, and traffic related) and could also indicate likely risk of elements which could thereby provide a better reflection of the elements of concern under a constantly changing urban environment. The incorporation of routine sediment monitoring programs involving small waterbodies in urban areas would also indirectly promote conservation of ponds and canals that are consistently diminishing in numbers in all developing countries as part of the urban development process.