Media accounts of the opioid overdose epidemic emphasize the role of prescription drugs and, to a lesser extent, declining economic and social conditions. In support of the journalists’ accounts, opioid prescriptions, as measured in grams of morphine per person, increased three-fold between 2001 and 2011 (the peak year), and opioid overdose rates were particularly  high in areas of the country that have witnessed large declines in economic and social well-being. We quantified these observations. Our goal was to assess the degree to which prescriptions and social conditions predicted state differences in opioid overdose deaths. A university research project, dedicated to analyzing and ameliorating income inequality in the U.S. (Opportunity Insights), provided many of our social economic measures; the CDC and other government agencies provided the data on overdose and prescription rates. Thus, our data sets reflect two major U.S. trends: growing inequality and increasing  overdose deaths. Our analyses are at the state level and include the 48 continental states. 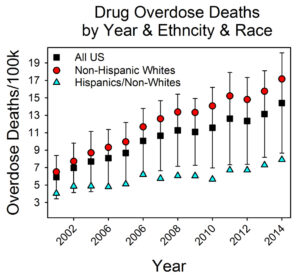 Fig. 1. State average overdose deaths in the U.S. as a function of year, race and ethnicity. On the x-axis is year; on the y-axis are average overdose rates (across states). The error bars index one standard deviation as calculated across the 48 continental states. The between-state differences are about about twice as large as the between-year differences.

Figure 1 shows that overdose deaths varied as a function of race and ethnicity as well as geography.  Non-Hispanic Whites accounted for 83% of the deaths. For this demographic, the predictors of lower rates of upward income mobility and lower  social well-being proved strong  predictors of higher opioid prescription and overdose  rates. For instance, social capital (a measure of community cohesion and willingness to cooperate) predicted both the likelihood of moving from the lowest to highest income quintile and overdose deaths. The percentage of families headed by single mothers and elementary school test scores showed similar relationships. Also, notice that the error bars in Figure 1 are quite large. They reflect the between-state differences, which were about twice as big as the between-year differences.

Figure 2 summarizes our attempt to disentangle the correlations among the predictors. The bars show the correlations between state difference in overdose rates and state differences in: prescription rates, social capital levels, and the percentages of individuals 16 years of age or older who participated in the work force. The predictive power of the two social factors, taken together, was about as strong, as the predictive power of prescription rates. But the strongest predictor of overdose deaths was a factor that emerged in the analysis: the overlap (correlation) between the social economic measures and prescription rates. That is, in regards to predicting overdose rates, social factors and prescriptions were, to a substantial degree, inseparable. Although nominally distinct, they functioned as a unit in predicting overdose deaths. A longitudinal analysis of the year-by-year increases in overdoses yielded similar results.

For the Non-White population, the same predictors failed to account for much of the between-state differences in overdose deaths. For example,  the correlation between prescription rates and overdose deaths was 0.07 for Hispanics and non-Whites, whereas it was 0.69 for Whites. The reasons for these differences remain unclear.

Fig. 2. The bar segments are proportional to the correlations between state differences in overdose deaths and state differences in the predictors. The strongest predictor of overdoses was a factor which emerged in the analysis: the overlap (correlation) between prescriptions and the two social-economic measures. In 2010 and 2011, work force participation was a stronger predictor of overdose deaths than was social capital; for all other years, social capital was a stronger predictor than workforce participation.

Although robust, our analyses leave out much. Figure 2 says nothing about how social-economic factors, prescription sales and overdose deaths affected one another. For example, does a decrease in social capital increase an individual’s desired to use opioids, and, if so, why?  Individual-level research can answer these and similar questions. However, we do not need to wait for this sort of study to appreciate that there is more to the opioid epidemic than the much discussed increases in opioid prescriptions. Figure 2 shows that  social-economic conditions have played a major role, and it also suggests that the increases in prescription rates were in part driven by worsening social-economic conditions.