Particle electrophoresis in free solution or in gel media is a powerful technique for characterizing the surface properties of colloidal particles. Particle gel electrophoresis, that is, transport processes of colloidal particles in polymer gel media under an applied electric field is quite different from usual particle electrophoresis in free solutions. There are two types of interactions acting between the particle and the surrounding gel medium when the particle is migrating through the pores of a gel matrix, that is, the short-range steric interaction due to the particle-gel friction and the long-range hydrodynamic interaction. For dense gels, where the particle size is larger than the pore size in a gel medium, the steric effect is dominant and a reputation theory can be applied. For dilute gels, on the other hand, where the particle size is much smaller than the gel pore size, the long-range hydrodynamic interaction between the particle and the gel medium must be taken into account. 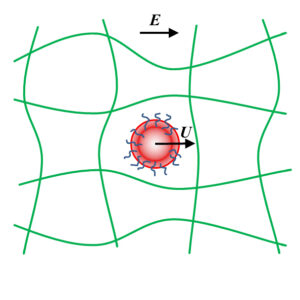