T cells are important players of the immune system, recognizing foreign or dangerous agents with their unique receptors. They defend the body from these agents either directly by killing or by recruiting or regulating other immune system components better suitable for defense. When deregulated, T cells can cause autoimmune diseases or, being exploited by cancer cells, T cells defend the tumor instead of the body. Therefore activation of T cells is a tightly regulated process involving in addition to the T cell receptor (TCR) and its signaling molecules also regulatory co-receptors that help or inhibit T cell activation. 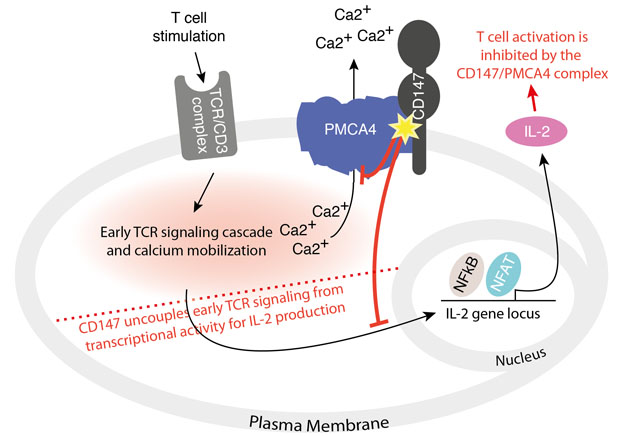 Numerous reports found the co-receptor CD147 enriched on activated T cells and also in cancerous tissue. CD147 was recognized as valuable marker in cancer prognosis, as its expression level correlated with metastasis and degree of tumor malignancy. Targeting CD147 might not only affect tumor cells function but additionally the tumor-protecting function of T cells hijacked by the tumor. In the autoimmune setting one could regulate disease-causing activated T cells. This makes CD147 a valuable biomarker and potential drug target in cancer or autoimmune disease. Understanding the molecular functionality of CD147 is not only essential to conduct and to estimate therapy outcome, but also to gain knowledge about the T cell or cancer biology.

Therefore we investigated in this study signaling mechanisms of CD147 regulating T cells. Signaling processes one can imagine as a domino effect, transferring this image on the TCR signaling cascade, the TCR would be the first domino that is initiated by recognition of foreign or dangerous material. Then several other signaling proteins, dominos, come into play that lead to a rise of intracellular calcium, a further domino. After activation of furthermore signaling proteins, dominos, transcription factors NFAT and NFκB are induced to bind DNA and promote gene activation of IL-2, a protein inducing T cell growth. Artificially reducing cellular CD147 levels we observed enhancement in the signaling cascade at the level of transcription factor activation and downstream components, while upstream signaling components as calcium, among others, were unaffected or even decreased. Applied to domino effect it means: the later moiety of dominos fell quicker, although the first dominos fell slower. To find the missing signaling protein, or domino, for integration of CD147 signals in the late TCR signaling cascade we tested the functionality of CD147 mutants and searched for its interaction partners by affinity-purification mass spectrometry technique. We revealed that the IL-2-inhibiting immunomodulatory capacity of CD147 lies in the membrane proximal extracellular domain and the domain passing through the cellular membrane. Via this part CD147 interacts with the protein PMCA4 that integrates CD147 signals to the TCR signaling cascade.

From the cancer and T cell biology research view this data point to a possible role of CD147 in conducting signaling capacities to the one or other cellular function: e.g. retracting signaling and energy resources from transcriptional activities to quick signaling events as calcium mobilization. Acting rather downstream in the signaling cascade makes the CD147/PMCA4 complex an interesting drug target that could calm down malignant signals from early components of the receptor-induced signaling cascade. However, as a double-edged sword, CD147 might support calcium-dependent mechanisms besides inhibiting transcriptional activities. This might be an important issue to consider, scrutinize or even to exploit when using CD147 as therapeutic target.