Chronic Obstructive Pulmonary Disease (COPD) is a progressive and chronic lung disease, leading to difficulties with breathing for the patients. This is caused by the destruction of the lung sacs (alveoli), called emphysema and by inflammation of the upper airways, called chronic bronchitis. COPD is caused by chronic exposure to noxious gases and particles, the most well-known example being cigarette smoke. But also other gases can cause COPD, including exhaust fumes, air pollution, fumes from indoor cooking and coal mining dust. A subset of COPD patients are experiencing exacerbations from time to time. This is the sudden worsening of symptoms, coinciding with increased airway inflammation, a stronger decrease in lung function and increased hospitalization rates. Exacerbations can be triggered by many different factors, including airway infection and air pollution. However, for a large part the cause of the exacerbation is unknown. To date, no good treatment options are available for COPD patients, and current treatment is focused on reducing symptoms. In order to develop novel treatment options for COPD patients, it is important to understand the exact mechanism of COPD exacerbations. 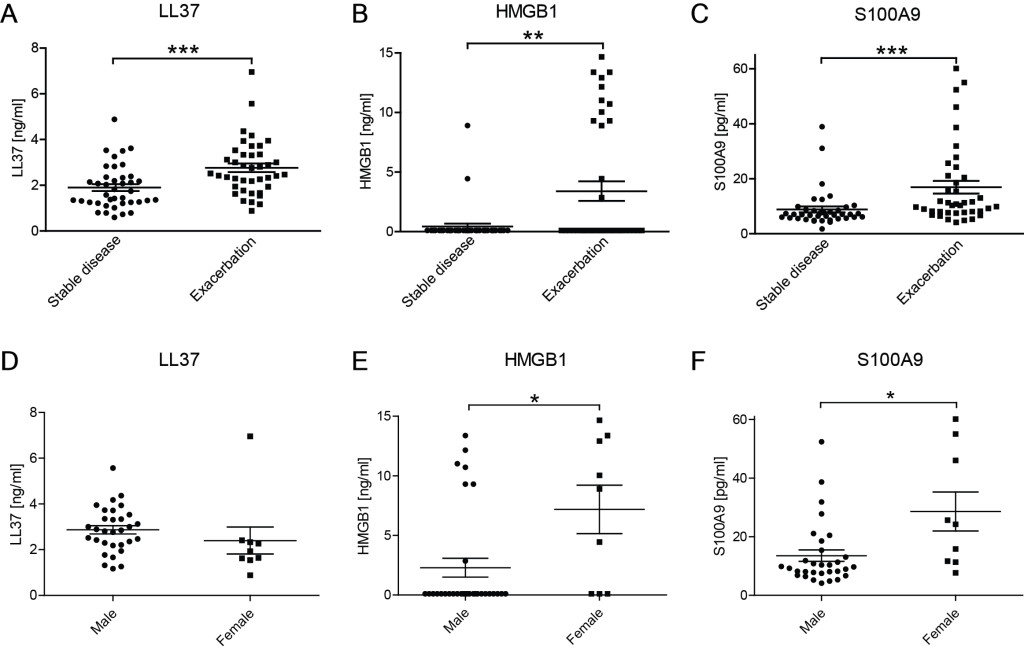 Recently, it has been proposed that danger signals, also called DAMPs, which are released into the lung fluid and the bloodstream from damaged lung cells, play an important role in the disease pathophysiology of COPD. In past studies our research team has shown that lung cells indeed release these DAMPs upon exposure to cigarette smoke. Furthermore, it was also shown that COPD patients have increased levels of specific danger signals in their lung fluid and blood compared to healthy controls. In this current study we measured several specific DAMPs in lung fluid and blood of COPD patients during an exacerbation and in the same patients when they were in stable disease.

Another interesting fact that we noticed was that all of the DAMPs that we found to be increased activate the same receptor, called RAGE. This is especially interesting because previously it was already shown that this receptor is involved in COPD, as the gene for RAGE was identified as a susceptibility gene for COPD and the expression of RAGE was increased in the airways of COPD patients.

Together, with our study we have shown that a specific subset of DAMPs, which all activate the RAGE receptor, is increased in blood of COPD patients during an exacerbation. The increased DAMP levels are especially visible in females and in patients which did not have an airway infection during the exacerbation. This information is valuable for further studies unraveling the underlying mechanisms of COPD exacerbations. Furthermore, it is possible that in the future blood DAMP levels will be used for the subtype of COPD exacerbations and to better predict the onset of exacerbations. It is also possible that this may lead to novel treatment options, blocking specific DAMPs or their receptors might be beneficial for a subset of COPD patients and may increase their quality of life substantially.