Spectroscopy of biophotons radiated from a fingertip

What color of light beams are emitting from your fingertips? That is neither a fantasy nor an occult question. If you possessed eyes of extremely high-sensitivity or had a special CCD camera like one used for a super-high-sensitivity telescope of an astronomical observatory, then you would be able to see glimmering light coming from your hands. In fact, all living organisms inherently emit ultra-weak light that originates from biochemical reactions as vital phenomena. Nevertheless, that light is too weak to be detected by the naked eye. For such a level of light intensity, particle-like behavior of light becomes predominant. A highly sensitive light detector can count photons, the smallest unit of light energy. Phenomena related to photon emission from living organisms are often designated as biophoton emissions. Human beings are no exception. A human fingertip normally emits ultra-weak light, with fewer than 1000 photons emitted per second. Figure 1 presents a biophoton image of a human hand observed using a highly sensitive CCD camera. Biophoton intensity is less than one one-thousandth the level of human eyes’ detectable light level. As to the wavelength, or color or spectrum of light, biophotonic light is generally spread widely over the visible wavelength region. However, a spectrum cannot be determined simultaneously for the whole visible wavelength region because of the light’s extreme weakness. 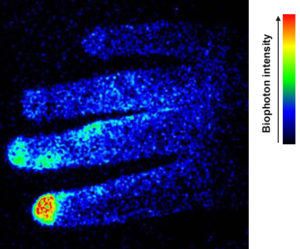 Fig. 1. Example of a biophoton image of a person’s right hand. The bright region of the finger shows the effect of cigarette smoking. Colors in the picture are pseudo-colors representing biophoton emission intensity.

Biophoton emissions are generally known to originate in biochemical reactions involving reactive oxygen species (ROS). Massive production of ROS promotes oxidative stress of living bodies, which causes diseases of many kinds. Spectral information of biophotons, if it were determined, might help the evaluation of mechanisms related to diagnostic information.

We have developed a polychromatic technique to measure and analyze faint biophoton emissions over the whole visible wavelength region, and have achieved identification of the biophoton spectrum of a human body. Figure 2 portrays an example of the biophoton spectrum of a human finger. Actually, the biophoton spectrum dominantly covers the 600-650 nm wavelength region, corresponding to the orange and red color region. From the spectral pattern, the finally excited molecules of biophoton emissions are inferred. The ROS-promoted lipid peroxidation process is primarily involved in emission mechanisms. Photo-emissive excited substances are generated in this process. Particularly, various pigments intrinsically involved in the specific skin layers are believed to be biophoton sources. Therefore, the observed spectral feature represents the contribution of different pigments, providing diagnostic clues to oxidative stress in skin. For example, ultraviolet (UV) light typically causes oxidative stress of the skin. The biophoton spectrum potentially implies health conditions or oxidative damage of dermal cells with UV or sunlight exposure. 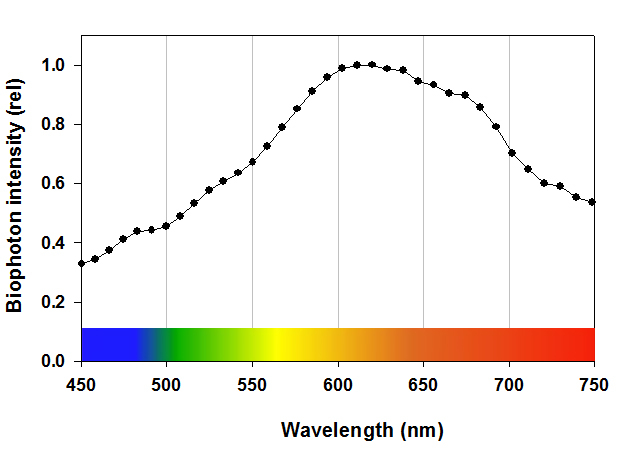 Fig. 2. Biophoton spectrum observed on a fingertip. The subject has no smoking habit. The color bar shows the actual colors of light corresponding to the respective wavelengths.

In the published article, we present discussion of the spectral analysis of photo-emissive pigments as candidates of biophoton sources existing in skin layers. We show a comparison of the spectral pattern of human biophotons to chemically induced photon emission from a dermal pigment, melamine, under a lipid peroxidation process. This technique suggests the potential of identifying the emission species and processes.

In the future, a health check instrument for diagnosing a living body might be realized whereby a person would merely put a hand over a spectroscopic biophoton detector.