Guillain-Barré syndrome (GBS) is an acute-onset, immune-mediated disorder of the peripheral nervous system, which is currently divided into several subtypes based on electrodiagnostic, pathological and immunological criteria. GBS includes at least three disease patterns: acute inflammatory demyelinating polyneuropathy (AIDP), acute motor axonal and motor-sensory axonal neuropathy (AMAN and AMSAN), and Fisher syndrome. Pathological studies in early GBS, defined as of 10 days of disease onset, are scanty. The aim of this paper was to review the contributions of Haymaker and Kernohan (Medicine 1949; 28: 59-141) to GBS, particularly focused on early stages of the disease. 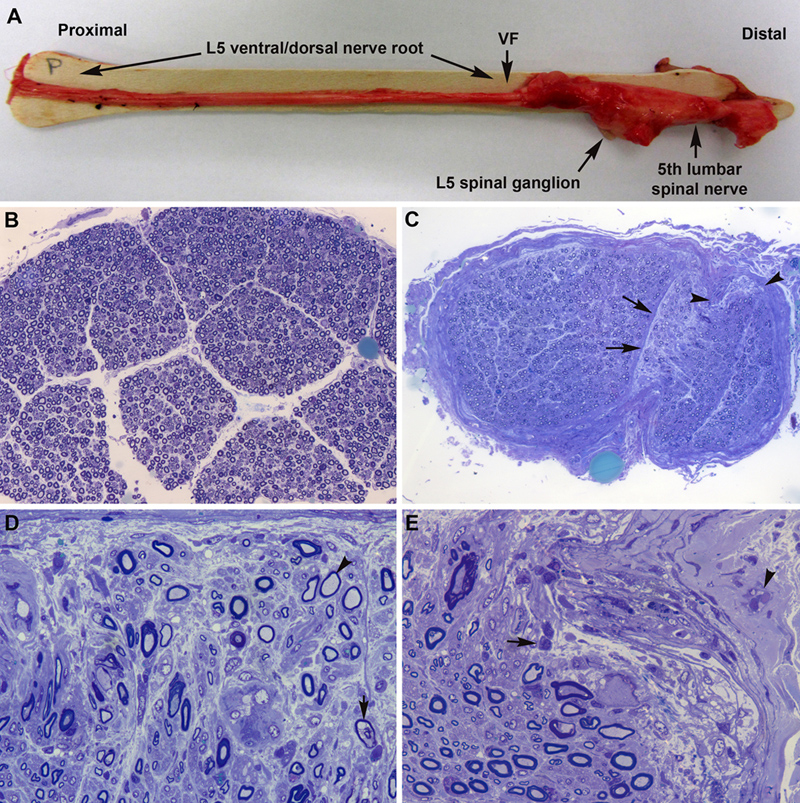 Fig. 1. L5 root and fifth lumbar nerve in a severe AIDP patient. She died 9 days after onset. (A) After being dissected down, macroscopic appearance of the right L5 spinal root, L5 spinal ganglion and fifth lumbar spinal nerve. Whereas the preforaminal root shows normal morphology, as of the vertebral foramen (VF) note visible nerve enlargement. (B) Semithin cross-section of L5 ventral root, taken 1 cm above its entrance to the VF, showing that the density of myelinated fibres is preserved (Toluidine blue; original magnification x100 before reduction). (C) Semithin cross-section of the ventral ramus of the fifth lumbar nerve, taken at its emergence trough intervertebral foramen, showing widespread endoneural oedema, which is more conspicuous in some subperineurial areas (arrows and arrowheads); such oedema results in a spacing out phenomenon giving an observer the false impression of reduced density of myelinated fibres (Toluidine blue; original magnification x65 before reduction). (D) High-power view of the subperineurial area arrowed in B. Note the presence of inflammatory oedema with numerous mononuclear cells, fibres with inappropriately thin myelin sheaths (arrowhead), and fibres exhibiting myelin vacuolation (arrow) (Toluidine blue; original magnification x630 before reduction). (E) High-power view of the epi-perineurial and subperineurial area indicated with arrowheads in B. Conspicuous oedema is accompanied by the presence of endoneurial (arrow) and epi-perineurial (arrowhead) mononuclear cells (Toluidine blue; original magnification x630 before reduction).

Haymaker and Kernohan reported a clinico-pathological study in 50 cases of fatal GBS, 32 of them having died between 2 and 10 days after symptomatic onset, namely during the period currently accepted as early GBS. The authors found that the brunt of initial lesions, consisting of endoneurial oedema interpreted as degenerative, relied on spinal nerves. Remarkably, these features have been most important to understanding the pathophysiology of the disease. At the time of publication, the paper was also essential to clarify the nosological limits of GBS with Landry’s palsy and acute febrile polyneuritis, and to refuse two erroneous exclusion GBS criteria: i/ fatal clinical course; and ii/ normal cerebrospinal fluid (CSF) at the onset of the illness (by then, CSF albumino-cytological dissociation was considered an obligatory diagnostic criterion).

Haymaker and Kernohan summarized the evolution of GBS nerve lesions as follows:

This chronological and topographic evolution of pathological changes in GBS, either AIDP or AMAN/AMSAN, was corroborated by further studies, the only departure feature being that nerve inflammatory infiltrates were present from the first days of disease onset, and therefore not being reparative but pathogenic. It is worth noting that this is also the pathologic hallmark of experimental allergic neuritis, which is considered the animal model of GBS. 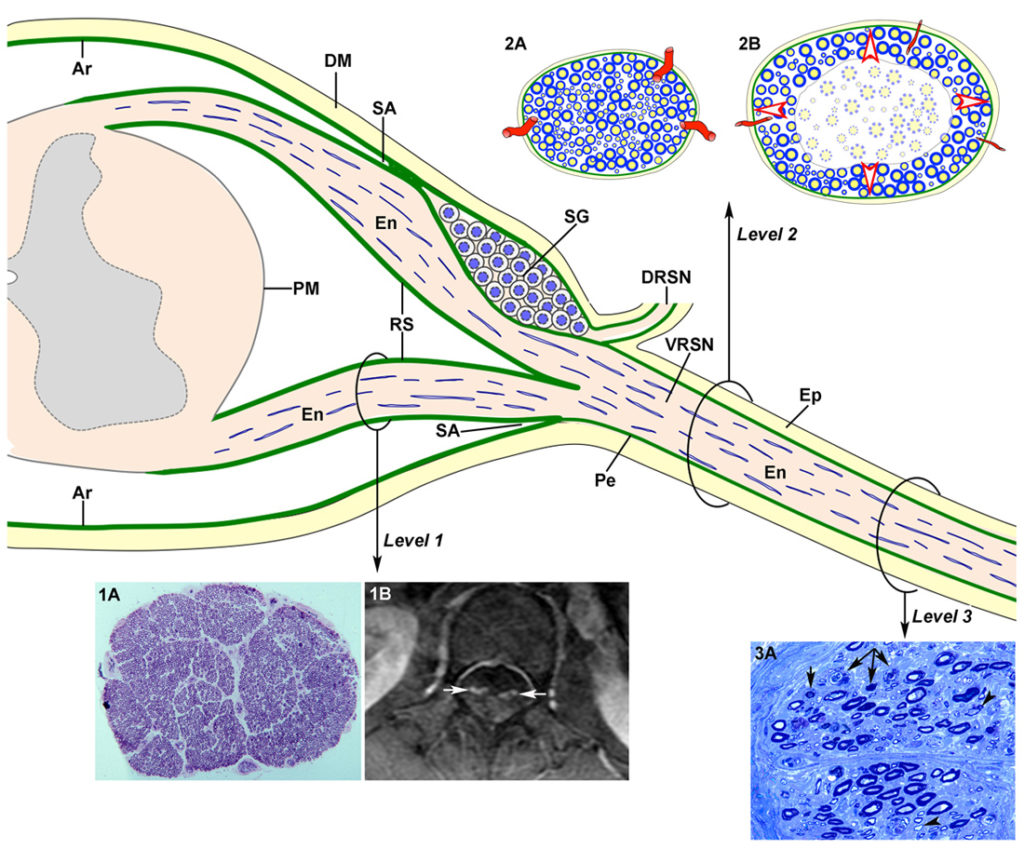 Fig. 2. Diagram of spinal root and spinal nerve microscopic anatomy. As of subaracnoid angle (SA), the epineurium (Ep) is in continuity with the dura mater (DM). The endoneurium (En) persists from the peripheral nerves through the spinal roots to their junction with the spinal cord. At the SA, the greater portion of the perineurium (Pe) passes between the dura and the arachnoid (Ar), but a few layers appear to continue over the roots as the inner layer of the root sheath (RS). The arachnoid is reflected over the roots at the SA and becomes continuous with the external layers of the RS. At the junction with the spinal cord, the outer layers become continuous with the pia mater (PM). Immediately beyond the spinal ganglion (SG), at the SA, the ventral and dorsal nerve roots unite to form the spinal nerve, which emerges through the intervertebral foramen and divides into a dorsal ramus (DRSN) and a ventral ramus (VRSN). Therefore intrathecal nerve roots are covered by an elastic root sheath derived from the arachnoid, whereas spinal nerves possess epi-perineurium which is relatively inelastic. Proximal-to-distal early GBS inflammatory lesions are illustrated as follows: ventral lumbar root (level 1), spinal nerve (level 2) and sciatic nerve (level 3). At level 1, this semithin complete cross section of ventral L5 root shows preservation of the density myelinated fibres (1A), though inflammatory lesions, observable at higher augmentation (not shown), may account for increased surface area, and thickening and contrast enhancement of ventral roots on spinal MRI (1B, arrows). Both cartoons at level 2 illustrate the following features: i/ normal anatomy of spinal nerve, usually monofascicular with epi-perineurial covering (2A), which account for its sonographic appearance usually consisting of a hypoechoic oval structure surrounded by hyperechoic perineurial rim; and ii/ endoneurial inflammatory oedema may cause a critical elevation in EFP that constricts transperineurial vessels by stretching the perineurium beyond the compliance limits (2B, arrowheads), which could result in areas of endoneurial ischemia, here centrofascicular. As illustrated here (2A vs 2B), despite low spinal nerve compliance, early inflammatory events in GBS may cause an increase of cross sectional area; moreover, perineurial inflammation accounts for loss of hyperechoic perineurial rim (see figure 6 in the Publication). At level 3, this cross semithin section of sciatic nerve from a fatal AIDP patient shows several myelinated fibres exhibiting wallerian-like degeneration (myelin collapse, arrows) secondary to more proximal demyelinating lesions; note the presence of remyelinated fibers (arrowheads) and lipid-laden macrophages. Without knowledge of proximal nerve pathology, such distal florid wallerian-like lesions would make it very difficult to reach an accurate diagnosis.

As indicated in our Publication, over the last three decades we have performed detailed autopsy studies in AIDP patients showing that pathological lesions drastically change in the transit from spinal roots (preforaminal) to spinal nerves (postforaminal) (Fig. 1). Figure 2 summarizes our proposal of pathophysiological events in early stages of the disease, to a large degree inspired by the original description of Haymaker and Kernohan. The pathogenic relevance of spinal nerve lesions (ventral rami) in early GBS has recently been corroborated by special electrophysiological studies (triple stimulation technique or lumbar root stimulation), and nerve ultrasonography. The presence of inflammatory lesions in ventral rami of spinal nerves, as outstanding pathological feature of early GBS, helps explain the pathogenesis in cases with severe paralysis and short-lived clinical course whose autopsy studies, not including spinal nerves, showed no prominent structural changes along the nerve, and cases with demonstrated selective proximal nerve conduction block revealed by triple stimulation technique or lumbar root stimulation.

I conclude that the Haymaker and Kernohan’s legacy remains as relevant as ever.