Unstable housing, including homelessness, is a key socioeconomic determinant of poor health outcomes and premature death in the United States. Housing-insecure individuals are more likely to delay seeking medical care due to costs, lack of health insurance, or logistical barriers such as transportation. While unstable housing is a public policy concern for all populations, it is even more critical for people with a serious chronic health condition such as HIV.

Sufficient adherence to daily antiretroviral (ART) medication has extended the lives of people living with HIV (PLHIV) since the mid-1990s, and has become the ultimate goal of HIV care and treatment. Unfortunately, unstable housing can present a barrier to ART adherence and a risk factor for unsuppressed viral load, which increases HIV-related illness as well as the likelihood of transmitting HIV to sexual partners, needle sharing partners, and infants. 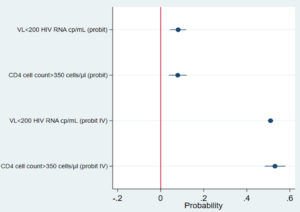 Fig. 1. . Positive effect of stable housing on viral suppression and CD4 cell count in women living with HIV. Notes: The probit IV models included Housing Opportunities for People with AIDS (HOPWA) funding per person newly infected with HIV, as an instrumental variable to more accurate measure the effects housing on health.
All results were significant at an alpha level of 0.01.

The study’s conceptual framework suggests that for patients with HIV, the effort of looking for housing reduces the time they spend on medical appointments and their ability to regularly take medication. Unstable housing introduces further stress and mental health issues to an already vulnerable population. And lack of housing impacts an individual’s finances due to its correlation with unsteady employment and low income.

Initial results showed that women who were stably housed had an increase of 8.1 percentage points in the likelihood of being virally suppressed, and an increase of 7.8 percentage points in the probability of having adequate CD4 cell counts. After including funding from the Housing Opportunities for People with AIDS (HOPWA) per person newly infected with HIV (as instrumental variable), stable housing increased viral suppression by 51 percentage points and increased the likelihood of adequate CD4 cell counts by 53 percentage points (Fig. 1). Measuring HOPWA allocations per person newly infected with HIV provided gave a more accurate picture of the resources available to address housing instability among PLHIV when compared to total HOPWA allocations, which were based on the number of historical AIDS cases regardless of whether the people with AIDS were still alive.

This study reiterates the principle that “housing is health”, and provides further empiric evidence that addressing housing status is just as important for improving clinical outcomes as addressing immediate physical needs. Housing vouchers and other housing assistance programs such as HOPWA that focus on making housing more affordable and accessible for low-income populations, and HIV-positive populations in particular, are urgently needed.