Do you know that bacteria, microscopic organisms not visible by the human naked eye, can live in complex communities just like we humans do? They are perfectly able to stick together, grow and multiply in what is commonly known as biofilms. These bacterial communities can be found adhered to a lot of different substrates: in the tooth surface forming caries, in the surface of filters and pipelines used in the alimentary and metal industry and also in several medical implants. This community-based mode of growth gives bacteria the ability to survive in adverse environmental conditions and to harsh treatments with different antibiotics or disinfectants. Of course you’ll wonder how these biofilms are formed. First, bacteria reach a proper surface or substrate, then attach to it and start to grow. During all this process, bacteria produce and secrete different molecules (mostly proteins, polysaccharides and nucleic acids) that constitute the extracellular matrix, the fundamental scaffold required to build up these “microbial cities”. 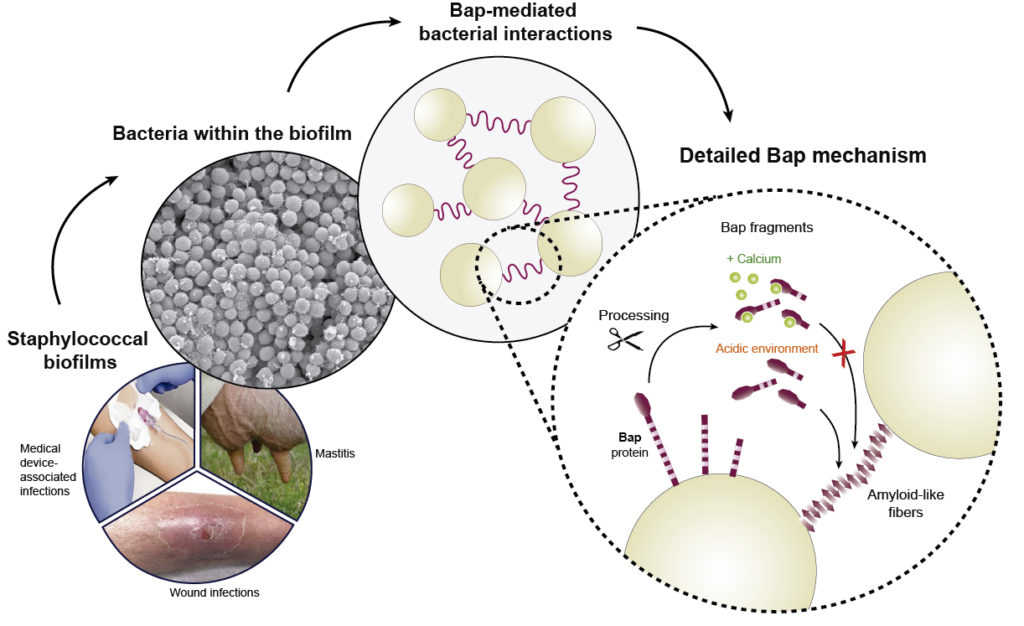 Fig. 1. S. aureus can cause many infections through the formation of a biofilm adhered to different alive and inert surfaces. A deep look into some of these biofilms reveals the presence of millions of bacteria glued together by an extracellular matrix composed by proteins. Particularly, the Bap protein described in our work is capable, under acidic and low calcium conditions, to form amyloid-like fibers that are ultimately responsible for the formation of a biofilm in S. aureus.

In our work, we particularly focused on studying the capacity of Staphylococcus aureus to develop a biofilm. This bacterium can inhabit the skin and anterior nares of humans, and it is considered a major pathogen responsible for a wide range of serious acute and chronic diseases both in humans and animals, principally due to its capacity to reside in biofilms adhered to a plethora of alive and inert surfaces (Fig. 1). For this reason, scientists have dedicated a lot of effort over the past few decades to elucidate the composition of the staphylococcal extracellular matrix. Recent studies have revealed that proteins are one of the major components of the S. aureus extracellular matrix, although their spatial organization and molecular interactions within a biofilm remain in most cases largely unknown. To shed some light on this issue, we have studied the molecular mechanism by which Bap (Biofilm associated protein) mediates interactions between bacteria during biofilm development in S. aureus. Bap is a high molecular weight protein that is localized at the bacterial cell surface. According to our recent study, this protein connects staphylococcal cells through a particular mechanism: once it is located on the bacterial surface, Bap is processed and some of the released fragments adopt a specific conformation that, when the medium becomes acidic and calcium concentration is low, is capable of polymerizing to form fibrillar structures, called amyloids, which will favor the formation of a biofilm matrix (Fig. 1). On the contrary, when calcium is present at high concentrations (milimolar range), the cation binds to the protein stabilizing its structure and hindering the formation of these fibers. As a consequence, under this condition there is no biofilm formation. The Bap-mediated bacterial aggregation mechanism could be physiologically relevant for staphylococcal strains colonizing niches displaying acidic conditions or during infectious processes in which local acidosis arises as a result of an inflammatory response and bacterial metabolism.

The study of such a highly complex molecular process is required for further understanding of the microbial world; it is important to decipher how bacteria are connected to each other since this knowledge will give us the basis to know how to fight against undesired biofilms or, on the opposite, how to use them for the benefit of humans and animals. To conclude, it is important to notice that the amyloid fibers are particularly suitable to be used as nanomaterials in a myriad of biotechnological purposes, thus revealing the importance of their study.