Parkinson’s disease is one of the most common neurodegenerative diseases of the central nervous system. Its main symptoms are motor disturbances such as tremors, rigidity and slowing of movements; although patients may also suffer from sleep disorders, depression and dementia in the later stages of the disease. Pathologically, this disorder is characterized by loss of nerve cells (neurons) in the brain that produce the chemical dopamine, which helps control mood and movement.
Unfortunately, there is no known cure for Parkinson. Current treatments include primarily the administration of Levodopa (that it is converted into dopamine in the body). This treatment relieve some symptoms of the disease, but do not slow down or avoid the continue degeneration of brain cells. 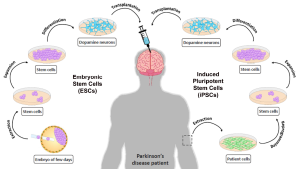 Strategies for generating dopamine neurons from stem cells for transplantation in Parkinson’s disease.

The idea of cell therapy is to replace the damaged neurons in the brain and this can be done using several different approaches. One consists in taken the healthy developing neurons from aborted fetuses and then transplanting them into the brains of Parkinson’s patients.  After implantation, these cells begin to form connections with the existing cells; they can survive for several years and produce dopamine with significant improvements in symptoms.  However the use of fetal tissue is not a good long-term renewable source of cells, both for ethical and practical reasons (since at least 5-6 fetal tissues per patient are needed).

So right now, scientists are studying stem cells as an alternative source of new dopamine-producing cells to treat Parkinson`s disease. Stem cells are primitive cells, able to divide and to develop into more specialized cells, such as neuronal cells, by a process known as differentiation.  In laboratories, with the right combination of chemical factors, undifferentiated stem cells can be grown to a point where they become dopamine neurons and then implanted to finish maturing in the brain.

Different types of stem cells can be used to generate dopaminergic neurons; currently some of the most promising are Embryonic Stem Cells (ESCs) that are obtained from the embryo that is a few days old, for example, from embryos left over from fertility treatment in in vitro fertilization clinics (and then donated for research purposes). ESCs differentiate into neurons more easily than other types of cells, and when grafted into the brain of rats similar to those of Parkinson symptoms, these cells have been shown to significantly improve motion deficits. The main problem with this approach is the risk of tumor formation (due to the presence of still dividing cells).

Other possibility is the use of induced Pluripotent Stem Cells (iPSCs) that are adult cells (e.g. skin cells) that have been genetically reprogrammed to an embryonic stem cell–like state by being forced to express genes important for maintaining the properties of ESCs. These can be generated in large numbers and then differentiated into dopamine neurons for transplantation. The main advantage of iPSCs over ESCs is that they are less prone to rejection by the immune system of patient, because the transplanted cells come from patients themselves.

In summary, Stem cell therapy may be a very promising strategy for the treatment of Parkinson, since if the stem cells can be induced to become dopamine neurons either before or after transplantation into the brain, complete recovery operation is theoretically possible.

However  before this becomes a reality, we still have to face several challenges as: to identify the best type of stem cells for obtaining large quantities of dopamine producing neurons, able to survive and work normally after transplantation inside the brain, and to ensure that the cells are safe and completely free of tumor forming cells.