Animal model of IBD was done on male C57Bl/6J and GFP-C57Bl/6J (GFP-B6) mice (carriers of the fluorescent protein). For induction of the inflammatory process in the intestine, 3.5% DSS solution (~40 kDa; Sigma-Aldrich) was added to drinking water for 7 days. On day 8, the animals were divided into 3 groups (5 mice per group): in control group mice received 0.2 mL of phosphate buffer saline (PBS), in experimental groups a part of mice received 0.2 mL of CM and other part of mice received 2×105 MSCs in 0.2 mL of PBS intravenously. On day 14 and day 21 mice were sacrificed, the small intestine was removed for histological examination and immunofluorescent analysis. MSC were separated from nucleated bone marrow cells of male GEP-B6 mice obtained routinely from femoral bones. Conditioned medium (CM) of passage 4 cultures was used for treatment. 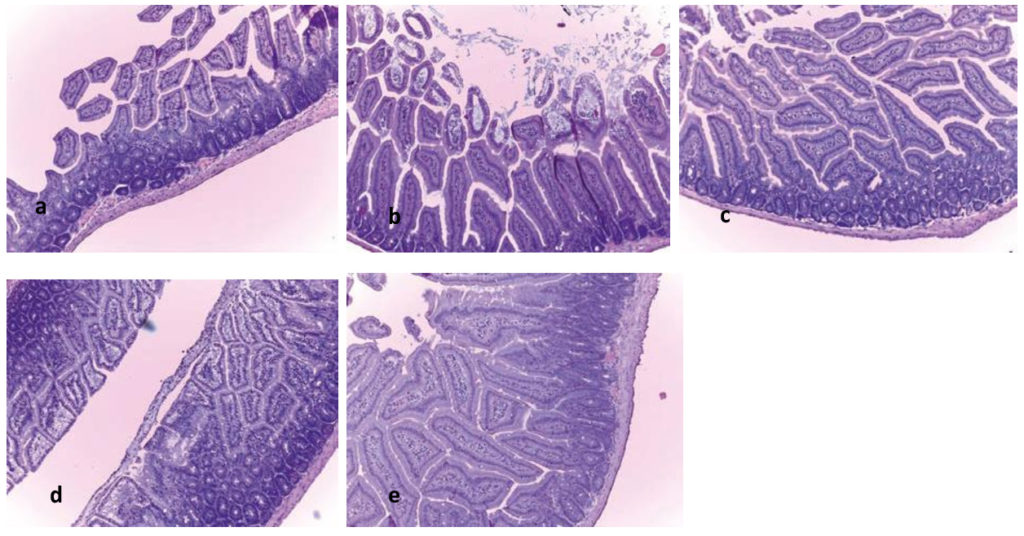 DSS intake with drinking water for 7 days led to the development of the inflammatory process in the intestine, which was seen from body weight loss (up to 5% of the initial body weight) by day 8 of the experiment and diarrhea. Single intravenous injection of MSC or CM reduced the severity of clinical signs of intestinal inflammation in comparison with the control, in particular, which manifested in normalization of body weight and the absence of diarrhea. In the control group, body weight deficit reached 10% by day 21. The intensity of the inflammatory process in the small intestine induced by drinking water with DSS was also assessed by the results of histological analysis on days 14 and 21 of the experiment. For instance, after single injection of MSC (Fig. 1, b, c) and CM (Fig. 1, d, e), the length of intestinal villi increased in comparison with the control (Fig. 1, a). In the control group, lymphocytic infiltration was somewhere seen in the lamina propria at the base of intestinal villi on day 21 of the experiment, the content of intraepithelial lymphocytes remained elevated. In the MSC group, only few intestinal villi of the small intestine contained neutrophils and signs of increased intraepithelial lymphocyte infiltration in the lamina propria. In CM group, no sites with inflammatory infiltration and increased content of intraepithelial lymphocytes were found. The destructive processes in the small intestinal mucosa was assessed by the dynamics of the number of Paneth cells involved in the regeneration/repair of the intestinal mucosa. For instance, the content of Paneth cells at the base of intestinal crypts and the number of mitoses in crypts were higher in the MSC and CM groups (primarily after single administration of CM). The results of morphological analysis indicate that the structure of the small intestine is closer to normal in animals receiving CM. At next stage, we analyzed migration of MSC from the peripheral blood to the depth of the small intestinal mucosa in DDS-induced inflammatory process. MSC migrated from the peripheral blood to the intestinal mucosa (Fig. 2, a, b) and were incorporate into the small intestinal villi (Fig. 2, c).