An immediate loss of strength accompanies nearly all types of skeletal muscle injury but there is debate whether the strength loss worsens over the first few days after injury. This is important to know because it influences injury treatment. It is known that degradative processes intrinsic to the muscle as well as inflammation are present in muscle in the hours and days following an acute injury but it is not known if these processes lead to an additional (or secondary) loss of strength (see red curve in Fig. 1). 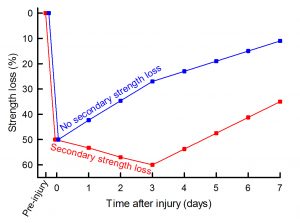 Fig. 1. Hypothetical changes in muscle strength loss in the week after an acute muscle injury. The red curve indicates the situation in which there is an additional (or secondary) loss of strength in the first few days post-injury whereas the blue curve shows the situation in which there is no secondary strength loss. The blue curve is consistent with our study’s findings. The percent strength loss numbers depicted on the graph are arbitrary and are used to indicate directional changes only.

If they do, therapeutic interventions, drugs, and/or nutritional supplements may be warranted to blunt these degradative processes. If they do not, the interventions, etc. may, at best, have no effects and deleterious effects at worst. To address this issue, we conducted a rigorous systematic review of the research literature focusing on studies that measured the strength loss immediately after an acute muscle injury and again at 1, 2, and/or 3 days post-injury. A total of 223 relevant studies were identified and these studies contained 262 subject groups suitable for analysis. These groups contained over 4000 human and animal subjects upon which a total of 936 averaged observations were made of strength changes after injury. A statistical technique, referred to as a meta-analysis, was used to mathematically combine the results from the studies. The meta-analysis technique was also used to examine experimental factors that could possibly explain some of the variability in findings among studies. The main finding of the study was that after the initial injury, strength on average does not decrease but instead improves over the first three days. In fact, the evidence indicates that strength improves steadily over the first three days post-injury (see blue curve in Fig. 1). The study’s main finding was not influenced by subject type (human vs. animal), subject age, type of injury (exercise-induced vs. traumatic), and the type of muscle contraction used to assess strength. Some of the variability in findings among studies could be explained by subject sex (i.e., males appear to regain strength faster than females), the muscle group injured (i.e., the elbow flexors appear to regain strength faster than the knee extensors or flexors), magnitude of the immediate post-injury strength loss, and whether or not fatigue was also induced by injury. The absence of a secondary strength loss following an acute muscle injury suggests that the degradative processes and inflammation in muscle after injury are constrained to lie in the parts of the muscle that were injured originally. Our findings argue against the degradative processes spreading to parts of the muscle that were not damaged initially and then in turn causing additional (or secondary) damage. Our findings suggest that caution should be taken when treatments are implemented in the first few days after a muscle injury because they may be contraindicated. They may actually impair the recovery from injury.