Stress hormone level shoots up during abiotic stress to sustains the stress in S. quadricauda

Energy is an inevitable part and makes life possible.  Globally, over 90 percent of transportation energy requirement is met by fossil fuels. International Energy Agency (IEA) predicts that, if we continue to use the fossil fuel at the current rate of consumption, the definite fossil reserve will deplete rapidly. Thus, researchers and policy makers alerted the society for an alternate renewable energy source. It includes tapping solar power, geothermal, hydro power etc. But majority of them are used for industry, agriculture and power houses, but largely not for transportation. In order to meet the transportation fuel requirement, cellulosic ethanol and microalgae derived biofuel are currently being considered as an alternate renewable source.  The latter feedstock is the only known reported renewable source having the theoretical potential to completely replace the definite, rapidly depleting and polluting fossil fuel requirement.

Microalgae as a renewable transportation fuel feed stock:
Microalgae are tiny unicellular organism grown in freshwater and marine ecosystem. Naturally microalgae derives it food through photosynthesis like any other terrestrial plants. A group of algae which stores neutral lipids as a storage energy reserve called as oleaginous microalgae like an oil seed crops. These neutral lipids can be detected using lipophilic dye call Nile red (Fig 1.). These lipids are chemically Triacylglycerol, can be transesterified as fatty acid methyl esters, which can be readily blend with petro diesel to run the diesel engine without any modification. 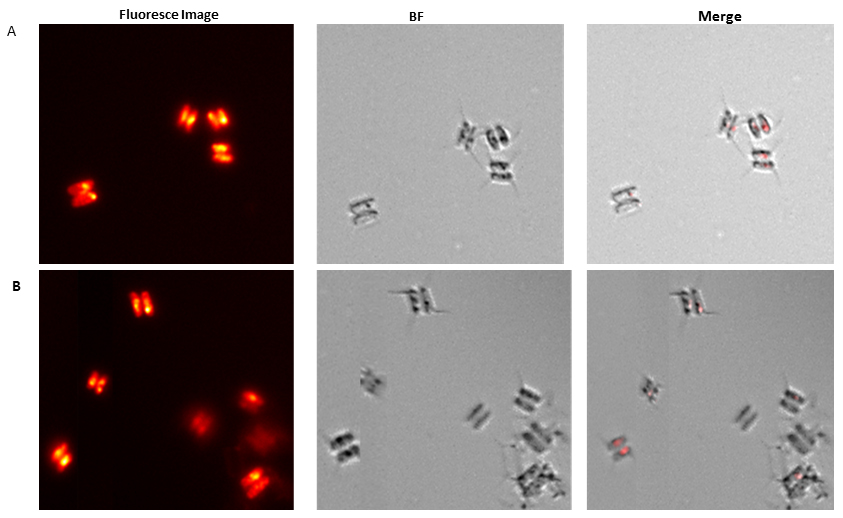 How to enhance the lipid?
The current scientific challenge in algal biofuel R &D is how to enhance the biomass and lipid yield without competing with inputs used for agriculture and food chain in a cost effective manner. One prominent and practicable feasible approach is stress mediated lipid accumulation. It is practiced, when the algal cells attain maximum cell density, subsequently exposed to nitrogen free or salt stress or any other stress conditions, which enhances the lipid yield. In our lab, we have recently reported about 2.27 fold more lipid accumulation during nitrogen starved condition in Scenedesmus quadricauda (S. quadricauda). During nitrogen starvation cells accumulate more lipids but with drastic reduction of cell biomass, thus we made an effort to sustain in the biomass. In addition to lipid enhancement, many adverse cellular changes take place during the stress, like cell division arrest, slowdown of protein synthesis, reduced photosynthesis and eventually lead to cell death.  Our group working on S. quadricauda (KM250077) a suitable microalga stain with many desirable properties as a biodiesel feedstock. Here we report, that Scenedesmus as a part of natural self defence mechanism, whenever the cells are exposed to stress, in order to cope-up the stress it responds with many molecular changes. One prominent response is synthesis of stress hormone abscisic acid (ABA) during nitrogen starved stress condition. In our recent finding we report that almost four times more ABA was synthesised (Fig. 2) in order to cope-up the stress in S. quadricauda. 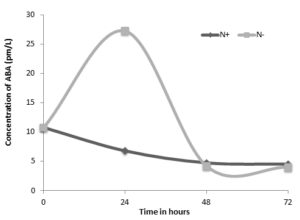 The elevated level of ABA tend to sustain the biomass yield (2.1 fold in stressed condition) up to 4 days with sustained stress mediated lipid yield. Additionally, external supplementation of ABA proportionately enhanced to the tune of 11 % with almost same amount of decrease in unsaturated fatty acids. This particular desired feature enables tuning of stress mediated lipid accumulation in S. quadricauda towards biofuel application. In addition, our group also identified Stress Associated Proteins (SAP) and their role in coping-up of stress with an overall objective of stress mediated lipid accumulation for energy and nutraceuticals application is being under investigation.

Acknowledgement:
This work was funded by DST, Government of India through the fast track project entitled “SB/YS/LS-13/2013”: Biochemical and Molecular investigation on stress mediated lipid accumulation and biomass productivity in microalgae” to MA.