Stressful childhoods lead to shorter adult height, but via different pathways for boys and girls

As children grow into adults, they face compromises between prolonging growth, and reaching milestones such as puberty and the start of reproduction. They respond to cues in their environment in order to choose the best compromise. In stressful environments, it may be better to reach milestones earlier, to ensure that you reach the milestones at all. However, earlier puberty means less time spent growing, resulting in shorter adult height. This may be problematic, because reduced adult stature is associated with an increased health risks, including type II diabetes and heart disease, as well as mental health problems. There are wider social repercussions too, with shorter adults earning less and do worse in cognitive tests. On average, taller people also live longer. Understanding how family disruption and childhood stress influences children’s age at puberty and adult height is therefore a vital component in untangling the long-term health consequences of a stressful childhood. 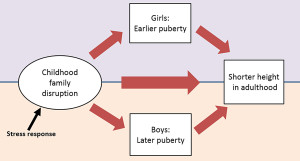 Fig. 1. Illustration of the different pathways boys and girls take between childhood stress and adult height.

It is well documented that childhood family disruption, at least in high income countries, is associated with younger age at puberty for girls. There is little information about boys, however some studies suggest that father absence might delay boys’ pubertal development. These gender differences in child development make it unclear how puberty relates to adult height for children who endure childhood stress.

This study aimed to assess the long term consequences of parental death, and divorce, on the timing of puberty and adult height of the children. We found that children who experienced parental divorce or death ultimately became shorter adults, but that there were different pathways through puberty for boys and girls, as illustrated in Figure 1.

We used data from over 16000 people from the US during the 1950s to examine the impact of family disruption during childhood impacted on age at puberty and adult height. We separated individuals into those whose parents divorced and those who had a parent die, compared to those who lived with both genetic parents throughout childhood.

For girls, as expected, we found that father absence due to death, but not divorce, before age seven, was associated with earlier puberty, and shorter adult height. For boys we see a different story. All types of family disruption during early childhood was associated with later age at puberty, but these boys also ultimately ended up as shorter adults. The effect is not negligible with stature shortened by over a third of an inch boys from divorced families, and almost an inch for those who lost a parent through death. We suspect that the stress of the death of a parent, or, to a lesser extent, divorce, raises levels of cortisol and other stress hormones which restricts testosterone production which is essential for male pubertal development. Stress, for both boys and girls, also inhibits growth. During this time in the US, divorce was relatively rare and the nuclear family normative; it’s important to set these results in appropriate context, as similar relationships may not be seen where nuclear families are less normative, or where divorce is common.

These findings challenge our views on the relationship between childhood stress and child development, including timing of puberty. However, it is clear that stress during childhood isn’t good for your height, and may have even further-reaching negative consequences due to well-documented connections between height and health.