Stroke mimics: Why we need to consider changing the protocol for stroke treatment

Stroke-like symptoms are not always what they seem. Certain disorders can mimic stroke symptoms, leading to the misdiagnosis of ischemic stroke in up to 19% of patients. Mistaking these stroke mimics with an actual stroke can have disastrous consequences, including death and permanent disability.

Electrolyte imbalances are a common culprit for stroke mimicry, particularly hyponatremia, or low sodium in the blood. This condition is common among elderly patients and results from disordered regulation of sodium and water in the body. Symptoms of hyponatremia can be indistinguishable from ischemic stroke and include changes in consciousness, seizure, or coma. Other neurological symptoms that are commonly associated with strokes, such as weakness, numbness, or uncoordinated movements, can also be seen with hyponatremia. 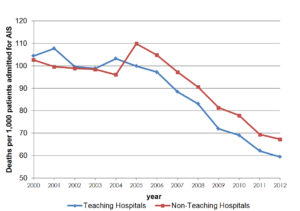 The current mainstay of stroke treatment is the administration of a clot-busting drug called tPA, tissue plasminogen activator.  If it is administered within 4.5 hours of the appearance of stroke symptoms, it can have a profound effect on the mortality and disability caused by the stroke.  Though time is of the essence, there are protocols in place and tests to run to ensure that it is safe to administer tPA, a powerful drug that can break up a clot but can also cause bleeding in the brain. A CT scan of the head is required to ensure there is no active bleeding, along with checking the blood sugar level, the number of platelets in the blood, and a study of the blood’s ability to coagulate.

The consequences of giving tPA to a patient with stroke-like symptoms who does not have a clot—for instance, to a patient with hyponatremia—can be disastrous. Recently we had a patient come in to the hospital with sudden stroke-like symptoms. He met all the criteria for getting tPA, but, after tPA was administered, the patient quickly deteriorated. Though we were able to stabilize him, he was left in critical condition. Labs that were pending at the time of tPA administration came back showing that he had a severely low level of sodium in his blood. Fortunately, the patient recovered and his stroke-like symptoms resolved when his sodium level was brought back up to normal.

Acting quickly and responsibly is key when treating a stroke because of the small window for effective treatment. With this hyponatremic patient we were unable to obtain medical records within that window of time and the patient was not able to provide his medical history, which included previous episodes of low sodium. If we had known his sodium level, we would not have given him tPA and this traumatic experience could have been avoided.

Hyponatremia and ischemic stroke both occur more often among the elderly. In light of this, checking the blood sodium level as part of the standard protocol before administering tPA, could avoid its detrimental use in scenarios where hyponatremia is mimicking the symptoms of a stroke. Checking the blood sodium level can take as little as 15 minutes in an emergency. Though it will require more research to determine if the benefits of checking the sodium outweigh the possible delay to immediate therapeutic treatment of a stroke, this potentially life-saving measure should be thoroughly considered and investigated.