Sub-Antarctic Fish – how do they do when things get warm?

Scientists are concerned about the fate of marine species, in particular fish, under future climate warming. Because fish body temperature varies as a consequence of variation in the ambient environmental temperature (they are “poikilotherms”), scientists expect that when marine habitats get warmer, fish will have to confront some stress, and can respond in different alternative ways: adapting locally, migrating to find a better place or dying and disappearing (extinction). However, since marine species distribution largely depends on thermal gradients, as most likely response the biogeographic ranges of several fish species are expected to shrink and if they good swimmers they could move to colder waters when their habitats become too warm. 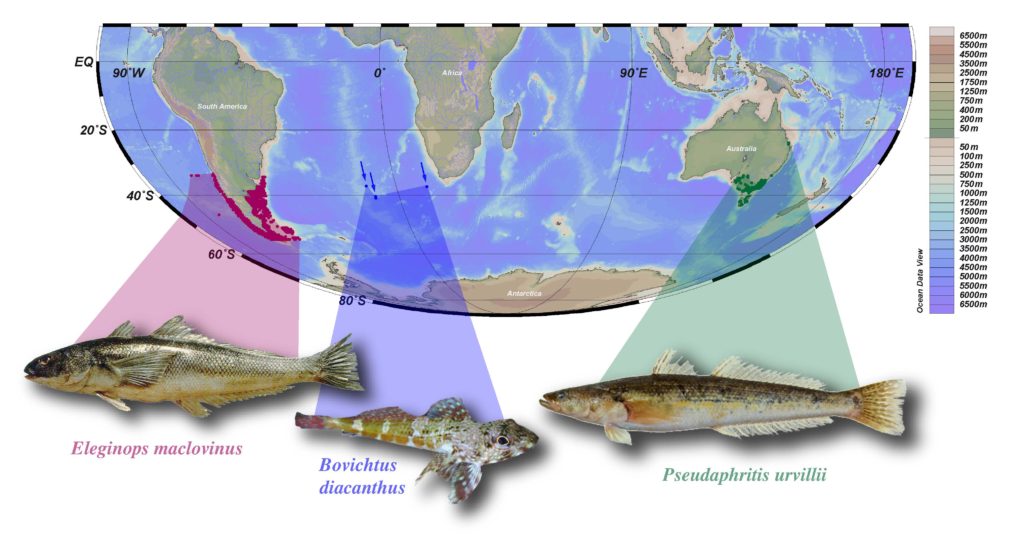 In our review we have pointed out that making predictions on species fate under climate change is complex and several aspects must be investigated to give a more precise answer. To explain this, we use as examples three groups of sub-Antarctic notothenioid fish: Bovichtidae, Pseudaphritidae and Eleginopsidae (Fig. 1).

Most of the bovichtids occur in connected waters to the Australian mainland, Tasmanian or the waters around New Zealand and one species of this group lives around the Tristan da Cunha Island (Fig. 1). Pseudaphritis urvillii is the only Pseudaphritidae and is found in waters connected to Southeastern Australia and Tasmania (Fig. 1). Eleginops maclovinus, the only Eleginopsidae, occurs around South America and the Falkland Islands (Fig. 1). Interestingly, the latter two species need both the marine and the river environment for their life cycles.

It is expected that sub-Antarctic notothenioids may have the ability to cope with increasing water temperature. If global warming is proceeding, such species may survive through physiological advantages over other more specialized species since they display warm–tolerance.

Reviewing what has been studied on the group, we contend that too little is known about their population biology and how their populations respond to environmental stress to draw firm conclusions. We hypothesize that, among their vulnerabilities, their dependence on local environmental specificities (rivers and estuaries to complete their life cycles) could also imply other significant problems when dealing with climate change and more direct anthropogenic pressures (river dams, pollution, over-fishing). Therefore, migrate to colder waters may be difficult if would out suitable habitats for their reproduction and feeding.

To manage and conserve these fish as a biological resource and to reduce the risk of local extinction, we also deem that these species need to be studied in terms of their life cycles, genetics, behavior, ecology, physiology, reproductive strategies and dispersal capacity.