Contrary to what one might think, sugar promotes sleepiness and not hyperactivity. There may be a good reason to sleep after a high-sugar meal. That is the conclusion of a new study published by neuroscientists at ESPCI ParisTech in collaboration with the Lyon Neuroscience Research Center. This study demonstrates that glucose promotes sleep by activating the neurons responsible for sleep onset and maintenance. These neurons integrate energetic signals such as ambient glucose directly to regulate vigilance states accordingly. This work was published in the Journal of Neuroscience. 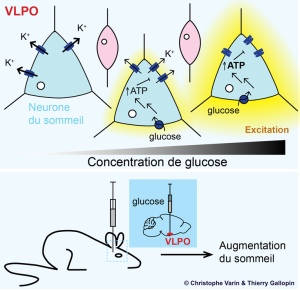 Cerebral glucose is directly detected by sleep-promoting neurons in VLPO. Glucose catabolism in neurons induces and increased production of ATP. The ATP inhibits some potassium channels, leading to an excitation of neurons. The molecular mechanism could explain the hypnogenic effects of the injection of glucose in a mouse VLPO.

Sleep is an ancestral state that serves a universal physiological need. Sleep is becoming a public health priority, not yet thoroughly analyzed, but with profound social and economic implications. Despite the discovery of some basic neurobiological concepts, the purposes and mechanisms involved in sleep promotion and in the coordinated succession of behavioral states remain largely unknown and are the subject of intense research. Better understanding of these physiological regulations is a challenge for modern neuroscience.

A well-admitted hypothesis is that a role of slow-wave sleep would be to replenish energy stores that were depleted during the previous wakefulness. Therefore, vigilance states could be directly modulated by a metabolic drive. In mammals, variations in energy intake, in particular by glucose intake can modulate vigilance states. Wakefulness is reduced after a meal while it is increased during fasting. Despite studies clearly demonstrating that metabolism can directly affect the activity of arousal systems, no investigation has yet attempted to assess the impact of metabolism on the excitability of neurons responsible for the onset of sleep.

A large number of studies conducted to identify the ventrolateral preoptic nucleus (VLPO) as the brain structure containing neurons responsible for the initiation and maintenance of slow-wave sleep, the first state of sleep. These inhibitory neurons are responsible for the inhibition of arousal systems in the brain and thus for the onset and maintenance of sleep. The inactivity of VLPO sleep-promoting neurons during waking is due to a tonic inhibition by several wake-promoting neurotransmitters. Therefore, this “reciprocal inhibitory interaction” is a key factor for promoting sleep. However, mechanisms responsible for VLPO activation at sleep onset and its deactivation during awakening are poorly understood.

By combining in vitro and in vivo experiments, the neuroscientists demonstrate that glucose likely contributes to sleep onset facilitation by increasing the excitability of sleep-promoting neurons in VLPO. They find that these neurons integrate energetic signals such as ambient glucose directly to regulate vigilance states accordingly. Glucose-induced excitation of sleep-promoting VLPO neurons should therefore be involved in the drowsiness that one feels after a high-sugar meal. This novel mechanism regulating the activity of VLPO neurons reinforces the fundamental and intimate link between sleep and metabolism.