In normal, healthy adults red blood cells (RBCs) are produced in the bone marrow and survive in the circulation for about 4 months. After this time they cease functioning normally and are removed by as yet poorly understood processes. In order to maintain blood hemoglobin at healthy levels to assure adequate oxygen delivery for nourishing the body’s tissues, worn out RBCs are being continually replaced. In disease states in which severe anemia develops, RBC transfusions are the most commonly administered therapy. 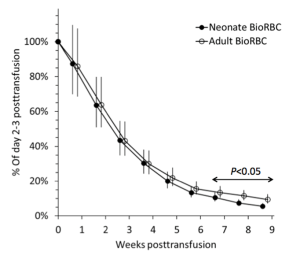 Based on studies in newborn infants done prior to 1970 when the radioactive RBC label chromium-51 was used for measuring RBC survival, it was found that survival of infant RBCs is approximately half that of adults, i.e., about 2 months. Although not previously tested, it has long been assumed that adult RBCs routinely administered in the treatment of anemia to sick newborn infants would survive for 4 months, i.e., just as do in adults. Using a new, versatile, easy to perform RBC labeling method using a naturally occurring vitamin (i.e., biotin), our objective was to simultaneously measure and compare the survival of adult blood donor RBCs labeled at one biotin density with the infant’s own RBCs labeled at a second biotin density. The infants we selected for study were critically ill, very low birth weight neonates weighing less than 1500 g at birth (3 pounds 5 ounces) and scheduled to receive a clinically indicated RBC transfusion. Using a laboratory instrument called a flow cytometry to measure biotin labeled RBCs, we have previously shown that it is possible to separately and concurrently measure the true survival of both infant and adult labeled RBCs (Widness et al. Pediatr Res 74:689-697, 2015). We anticipated that the survival of the infants’ own RBC would be less than half that of the transfused adult RBCs.

Contrary to what we expected, the survival of both neonatal and adult RBCs were statistically the same until post-transfusion week 7 when the infants’ RBCs were removed more rapidly than the adult donor RBC (see Figure). The more rapid removal of the infant’s own RBCs is likely of little to no clinical significance because this difference of the adult and neonatal RBC was so slight and because it occurred only at the very end when the contribution to the infants’ total Hb level was already little. Importantly, this work was accomplished using 10 µL volumes of laboratory blood samples that would otherwise have been discarded.

What do these unexpected results mean and what is their significance? The similar RBC survival of biotin labeled neonatal and adult RBCs when transfused into infants provides convincing new evidence that it is differences in the circulatory environment— not differences in how RBCs themselves are produced — that primary determines RBC survival. As such the present data indicate that transfusion of infants with their own placenta blood at birth —a topic of intense study and controversy in recent years — is not disadvantageous with respect to RBC survival. From a methodological perspective, the current data further illustrate the advantages of administering of multi-density biotin labeled RBCs — rather than administration of radioactive chromium-51 — for future survival studies. Examples of such RBC survival studies include comparison of fresh and stored donor RBCs, comparison of different RBC storage media or RBC treatments (pathogen reduction), and flow cytometric isolation of RBCs to better understand RBC senescence.