Summary of: Screening for viral hepatitis prior to rituximab chemotherapy 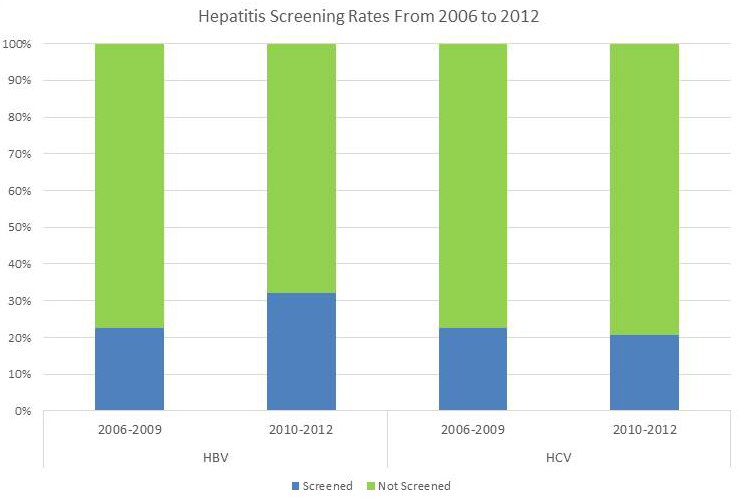 In 2008, the CDC recommended that patients receiving cytotoxic or immunosuppressive therapy undergo testing for HBV infection. In September 2013, the FDA added a warning for rituximab stating there was a risk of reactivation of HBV infection. They recommended HBV screening prior to rituximab initiation and discontinuation of rituximab if HBV reactivation occured while on therapy. There have been only a few clinical studies done to determine the clinical application of the guidelines recommending HBV screening prior to initiating chemotherapy in institutional settings.

This study included patients ≥18 years of age whom received rituximab between January 2006 and December 2012 at one institution. The main goal of this study was to compare HBV screening rates for veteran patients who received rituximab based chemotherapy prior to and after the release of the 2008 CDC guideline to see if there was a significant increase in screening. We also looked to determine if risk factors for hepatitis infection predicted hepatitis screening. The patients were divided into patients that received rituximab between 2006-2009 and 2010-2012. These dates were chosen to allow time for knowledge of the 2008 CDC guideline spread through the medical community

We found that the baseline rate of HBV screening was low (22%) prior to dissemination of the CDC guidelines and did not consistently increase after the CDC guidelines were disseminated. In 2009, there was an initial increase in only that year. We believe this was likely due to heighted awareness of the need to screen patients. We also found that, HCV screening of the same rituximab-treated Veterans, had similarly low screening results. There were also low rates of HBV and HCV screening among Veterans patients with established risk factors (substance/alcohol abuse, HIV, homelessness) for HBV and HCV infection. With an increased risk for both HBV and HCV infections veterans are at a very high risk for hepatitis reactivation if they are not screened and given immunosuppressive therapy.

There are several possible quality improvement initiatives that could be considered to improve HBV screening prior to immunosuppressive chemotherapy. One tool that is readily available for VA medical centers would be to create an EMR template that would require a negative HBV test before rituximab could be initiated.

HBV reactivation has the potential to be fatal, but it is also preventable if screened for as recommended. Effective quality improvement tools need to be implemented and evaluated to ensure that rituximab-treated patients are appropriately screened for HBV.