A physical dipole consists of two equal and opposite point charges. Atoms and molecules can be viewed like oscillating dipoles, picturing each atom as a tiny antenna emitting electromagnetic waves. The excited atomic states are relaxing to ground state because of the spontaneous emission. The rate of spontaneous emission for a singular atom is determined by the square of magnitude of the dipole moment (Fig. 1). If we have two atoms, then the rate of emission depends on the total dipole moment. In 1954, Robert Dicke introduced the concept of superradiance in describing the cooperative, spontaneous emission of photons from a collection of atoms that the N atoms act like one big atom and decay collectively. The maximum intensity of the emitted light scales with the square of the number of atoms, because each atom contributes a certain amount to the emission amplitude, and the intensity is proportional to the square of the amplitude. As the number of photons rises in a kind of chain reaction, Dicke later described the phenomenon of superradiance as an optical bomb (Fig. 1). 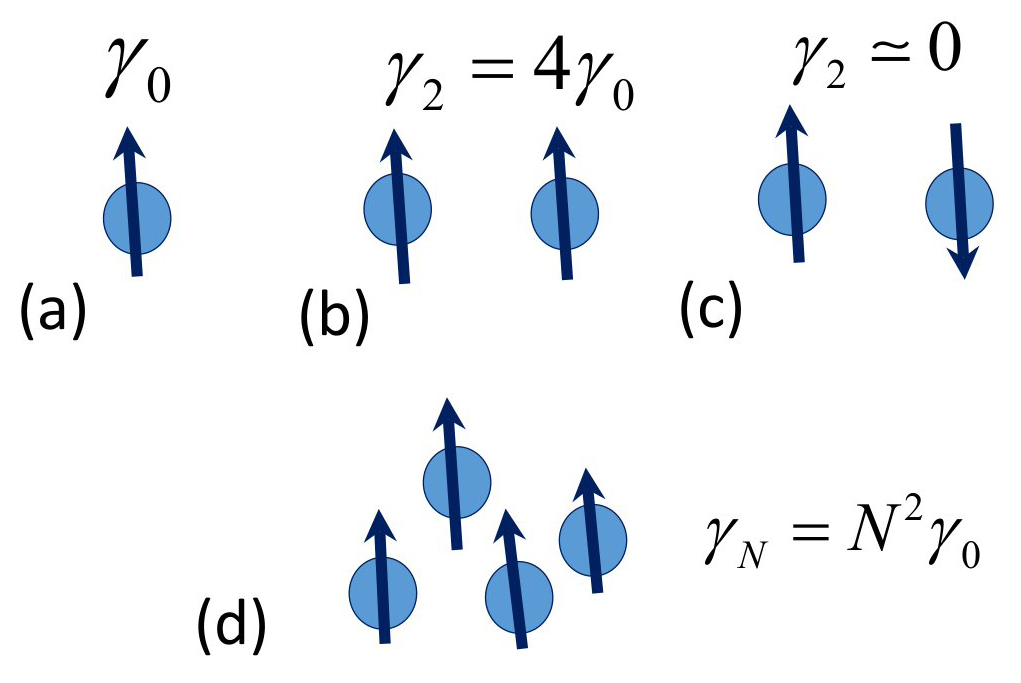 However, there also exist the so-called subradiant states, in which the energy remains partially trapped in the atomic system since some of the atomic dipoles become antiparallel and the macroscopic polarization of the system is zero; i.e., they cannot couple to a radiation field. This picture is intuitively clear when the atoms are close together compared to the wavelength of radiation λ, but when the atomic cloud size is larger than λ, there is no longer constructive cooperation in radiation emission. It was an experimental difficulty to bring atoms closer and coupled them together. Recent progress in new materials, such as nanomaterials and metamaterials naturally bring molecules and atoms closer to each other, allowing researcher to study cooperativity effects and coherent phenomena.

In our paper, we report theoretical and experimental studies of superradiant and subradiant radiation that demonstrates the bi-exponential decay of dye Rhodamine 800 (Rh800) near the metamaterial anisotropic mirror and ATTO655 in core-shell particles. All Dicke states can be exclusively divided into two groups. One set is the so-called super-radiant states. These states have transitions from the most excited state to the ground state. The second group of states is the sub-radiant states. They have weak transitions between each other. This second group have transitions to the ground state only if they are coupled to super-radiant group of states. These sub-radiant states can trap some population of excited states since the trapped population cannot reach the ground state. Relaxation from the subradiant states in the system occurs due to radiative coupling to the vacuum modes and due to interactions with phonons in the atomic matrix and the metamaterial structure. The relaxation leads to the population of the sub-radiant states by dephasing the super-radiant Dicke states giving rise to a bi-exponential decay that is observed in the experiments. A set of metamaterial samples consisting of gratings of paired silver nanostrips used in our experiments is coated with Rh800 dye molecules and exhibits the expected bi-exponential behavior. The dye and metamaterial have optical resonances in the same spectral range. The bi-exponential decay is demonstrated also for Au\SiO2\ATTO655 core-shell nanoparticles, and in this case the effect persists even when averaging over a broad range of the coupling parameter (Fig. 2).

The demonstrated cooperative effects in nanomaterials and metamaterials, where the quantum coherent effects are able to have an all-optical control on ultrafast time scales, can find various applications, such as quantum sensing, quantum information processing, and quantum simulations using metamaterials.