The mechanisms by which muscle converts chemical to mechanical energy, allowing animal movement, defied explanation for decades. Following the development of the electron microscope and mechanisms of tissue fixation, the ultrastructure of muscle was finally described. Thus was conceived the sliding filament theory, which satisfactorily explained most observable muscle properties. This theory has subsequently been the accepted mechanism of muscle contraction for over six decades. Interestingly, the earliest descriptions of the theory noted that muscle behaved as though in addition to thin and thick filaments, another “superthin” elastic filament must be present. However, as this theoretical filament was not observed, it was not incorporated into the model. Only decades later, and importantly after categorical acceptance of the sliding filament theory, the giant protein titin (AKA connectin) was described: a superthin elastic filament within the muscle fiber. As a filament spanning the sarcomere from Z disk to thick filament, titin is ideally positioned to function as an elastic spring. Once discovered, this largest of known proteins left biologists with two puzzles, one functional and one structural. 1) What is the evolutionary origin of this unique protein? 2) While clearly elastic in structure, why is titin too compliant to function as an in vivo “muscle spring”? 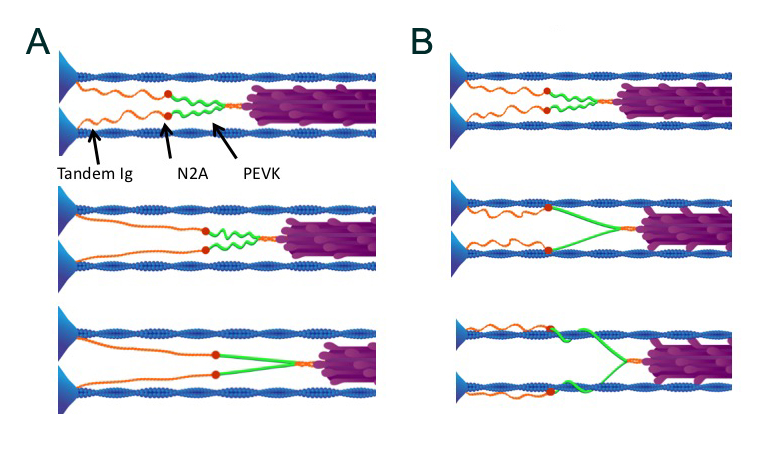 Since its discovery, it has become apparent that titin is one of a nearly ubiquitous group of similar muscle proteins, many of which were described long before titin. Importantly, the evolution of these titin-like proteins preceded the vertebrates. Indeed, similar proteins, called twitchin, sallimus and projectin, are found in all invertebrates except jellyfish; diverse isoforms perform assorted functions. There is now strong evidence that titin is one of a family of closely related muscle filamentous proteins that are ubiquitous in a wide diversity of muscle or muscle-like cells. However, this doesn’t directly bear upon the evolutionary origin of titin-like proteins. While somewhat speculative, evidence suggests that this group of giant elastic proteins may have been co-opted from chromosomal giant proteins responsible for DNA supercoiling.

If titin functions as an elastic element in muscle fibers, then when stretched it must store elastic recoil potential energy when stretched. However, when a resting muscle fiber is stretched, very little energy can be stored because titin is passively very compliant. Upon close examination, one finds that titin is composed of a very compliant region (tandem immunoglobulin domains) and a much stiffer region (PEVK), separated by a small “N2A” segment (Fig. 1A). In cardiac muscle titin both segments are greatly reduced in length, and thus the molecule is much stiffer. Importantly, the myocardium only shortens during relaxation, whereas skeletal muscle must function in isometric, and lengthening contractions as well. We believe these observations are directly linked.

During a cardiac cycle, as the ventricle is stretched during filling, the greater the stretch the greater the force of the subsequent contraction. This function is attributed to titin and is only possible if the passive stiffness of titin is high. Because skeletal muscles are organized in pairs of antagonists, however, one might imagine that a dynamically adjustable spring would be necessary to reduce the energy required to contract against a stiff antagonistic muscle. There is now strong evidence that titin stiffness increases in active skeletal muscle, likely by binding to thin filaments when calcium is present. In addition to increasing its stiffness upon muscle activation, several experiments suggest that cross bridges also increase titin stiffness indirectly, perhaps by winding titin around the thin filaments in each cross bridge cycle (Fig. 1B). This “winding filament hypothesis” explains several aspects of muscle physiology that have defied explanation under the standard sliding filament hypothesis.