Surface plasmons (SPs) are coherent delocalized electron oscillations that exist at the interface between two materials where the real part of the dielectric has different sign across the interface, and they has versatile applications in many interesting fields, such as improving the resolution of microscopes, enhancing the sensitivity of chemical and biological sensors, increasing the quantum efficiency of light-emitting devices, killing cancerous tissues, etc. Classically, metal nanoparticles are widely employed as the arena for surface plasmon, but metal nanoparticles based surface plasmon usually has relatively large optical loss, which impairs the applications of surface plasmon drastically. It has been reported that highly doped semiconductors can also serve as the arena for surface plasmon, but such surface plasmons can usually only cover the infrared region. Nowadays, graphene has been demonstrated the ability to provide surface plasmons in various spectrum regions ranging from ultraviolet to infrared, and the resonance peaks can be tuned by doping or regulating the sizes of graphene nanostructures. 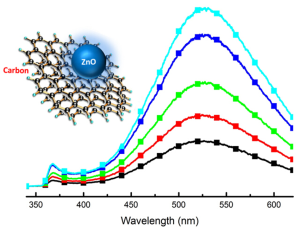