Today, attentions to the synergistic effects have raised due to bringing convenience and expedition into the complex processes. In the field of catalysis, synergistic effects between the ultrasound waves (USWs) and the nanosized heterogeneous species is one of the most substantial instances. Generally, the reaction conditions get milder through application of the auxiliaries (such as ultrasonication and co-catalysts), and also higher yield are obtained during the shorter times. In the catalytic processes by the heterogeneous nanoparticles, simultaneous application of the USWs brings two benefits; 1. Physical hits to the heterogeneous particles make them well dispersed in the liquid media, resulting in a large surface area. 2. Creation of numerous tiny hot bubbles in the reaction medium, which are great resources for providing the reaction’s driving force on the surface of the particles. In fact, emission of the USWs in the liquid media creates tiny hot bubbles that release their energy upon collision with the particles’ surfaces. In this case, localized heating onto the particles’ surfaces provides the required energy for the reaction. 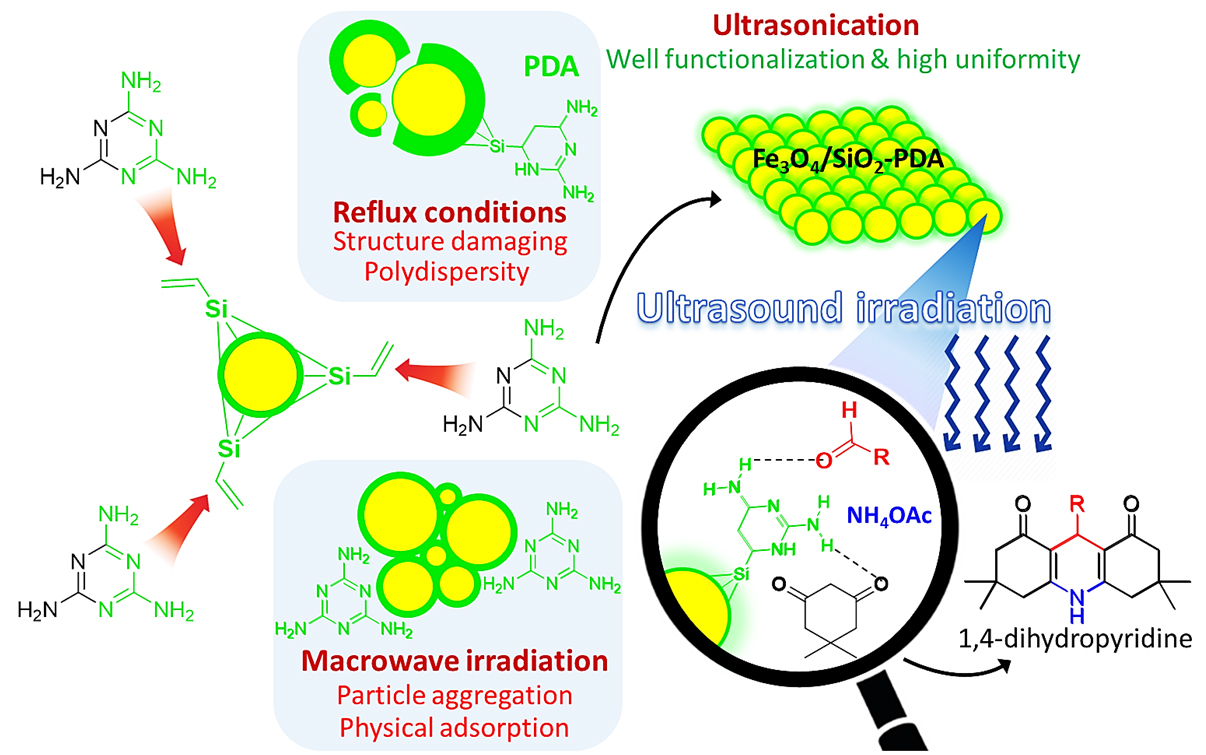 Fig. 1. Schematic presentation of the preparation route of the Fe3O4/SiO2-PDA catalytic system, and the multicomponent synthetic reaction of the DHP derivatives in the presence of the USWs (suggested by Taheri-Ledari et al.).

In this regard, Taheri-Ledari et al. have suggested a convenient strategy for the synthesis of various derivatives of 1,4-dihydropyridine (DHP), as one of the most important pharmaceutical compounds. In this way, they used iron oxide (with the formula of Fe3O4) magnetic nanoparticles coated by a layer of silica network (SiO2). High porosity of the silica network can provide an appropriate substrate for the catalysis of the reaction. The surface of the particles was then functionalized with pyrimidine-2,4-diamine (PDA) via Diels-Alder approach, which is well known in the organic chemistry. Irradiation of the USWs (with frequency of 50 KHz and power density of 38.5 W L-1) to the fabricated nanocatalyst (named as Fe3O4/SiO2-PDA) led to a high reaction yield (ca. 90%) over a 10-minute process. Figure 1 schematically presents the preparation route of the Fe3O4/SiO2-PDA catalytic system, and the multicomponent synthetic reaction of the DHP derivatives.

The structure of the prepared Fe3O4/SiO2-PDA catalytic system was well identified by Fourier-transform infrared, energy-dispersive, and X-ray diffraction spectroscopic methods. Dominant size and morphology of the magnetic nanoparticles was studied by electron-microscopy. The effect of the USWs on dispersion state of the particles in the colloidal phase was monitored by dynamic-light scattering analysis.

Optimizations revealed that the most suitable condition for the catalyzed synthesis of DHP derivatives would be dissolution of the raw materials (aldehyde, ammonium acetate, and b-keto ester or dimedone) in a mixture of water and ethanol with a volumetric ratio of [1:4], and ultrasonication (50 KHz, 38.5 W L-1) for 10 minutes at room temperature. Also, 50 mg of the prepared Fe3O4/SiO2-PDA catalytic system was subjected to the raw materials (1.0 mmol of each) in the optimal conditions. Recyclability of the Fe3O4/SiO2-PDA catalytic system has been studied, as well. For this purpose, it would be adequate to hold an external magnet at the bottom of the reaction flask, collect the magnetic particles at the end, and decant the rest into another flask. After several rinsing with the solvents and drying the particles, the recovered Fe3O4/SiO2-PDA particles were used in successive seven runs, without any significant decrease in the catalytic performance.

This work has disclosed this fact that a substantial catalytic activity is executed through a synergistic effect between the PDA-functionalized magnetic nanoparticles and the USWs.