A living body is made of the smallest building block, called ‘cell’. It gives us a shape, helps us to perform physiological and biological activities, and so on. A eukaryotic cell contains a nucleus, buried in the cytoplasm which is enveloped by the lipid cell wall. All are composed of different proteins which are made of amino acid residues. The proteins (in cells) are folded in well-defined fashion, called the ‘native structure’, which gives them specific functionality. The native structure of proteins is taken care by temperature, pH and ions in the medium (cytosol). Therefore, any irregularity in these conditions will cause misfolding of the protein, causing it to be toxic for the cell. As a consequence, the cell function changes causing a disease in the body. 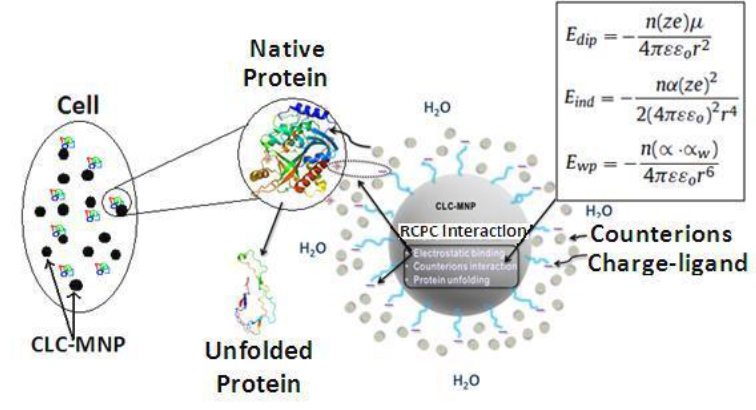 Fig. 1. CLC-MNPs internalization in targeted cell; binding of proteins with CLC-MNPs through RCPC interaction; unfolding of cell proteins due to interactions with counterions.

Present day therapy is based on mainly two methods, namely, regaining the cell functionality by repairing misfolded proteins using medicine or removing the diseased cell through surgery. Use of medicine has side-effect in our body due to its toxicity to other healthy cells. The disadvantages of surgery are the risk of complications such as wound infection, and the need for an operation. There are other therapeutic methods, like chemotherapy and radiotherapy, adopted for killing cancer cells. But these therapies also cause side-effects and there are reports of death due to the side effect, beside cancer. So far, no therapy could be developed without a side effect, though scientists are working in this direction.

Recently, nanoparticles have come in the focus due to their use in medical diagnosis and therapy, e.g., MRI and hyperthermia, respectively. Functional nanoparticles have been also used for targeted drug delivery, cell separation etc. Of late, we have developed a method of treating diseased cells using counterions bound nanoparticles. Though a long way to go, yet our preliminary research shows a possibility of developing an alternate medical therapy as follows.

We have synthesized counterions bound charge-ligand functionalized magnetic nanoparticles (CLC-MNPs). As ions can cause protein unfolding and agglomeration, thus a cell composed of several proteins can be killed. This is similar to the method of chemotherapy. But chemotherapy can kill healthy cells also in the living organism as there is no targeting mechanism. Our CLC-MNPs can be delivered to a targeted cell using a magnetic field gradient (or by additional functionalization of CLC-MNPs with appropriate antibodies). Once reached the targeted (diseased) cell, CLC-MNPs bind with the oppositely charged constituent proteins through electrostatic interaction (named as, reverse charge parity counterion or RCPC interaction) and the counterions of their functional ligands will be released. As a consequence, the proteins will be unfolded and agglomerated causing the cell death (apoptosis). Several interactions between the counterions and the amino acid residues are involved to unfold the protein. In this paper, I have formulated possible interactions between the counterions and amino acids residues which will cause protein unfolding. These interactions are based on the ‘charge-dipole’ and the ‘charge-induced dipole’ interactions. Other effect of ions is to polarize water molecules of the medium around the protein, the ‘solvation’ effect of ions. These interactions reduce the hydrophobicity of the core of the protein causing it to unfold (Fig.1). Thus, by using appropriate counterions bound ligand on nanoparticles these interactions can be controlled and thus the unfolding of proteins. By maximizing the rate of unfolding of proteins, the unfolded protein response (UPR) activity in the cell can be suppressed and the targeted cell apoptosis can be achieved.