The thyroid gland is a small butterfly-shaped endocrine organ located at the base of the throat, just below the Adam´s apple. Its function is to concentrate dietary iodine from the bloodstream and produce thyroid hormones, which have important roles in controlling metabolism and in stimulating growth and development of various tissues. Thyroid cancer is a relatively rare neoplasm (about 1.5% of all cancers), but is a common endocrine malignancy whose incidence has increased considerably in recent decades, reaching three times the cases diagnosed in the United States compared with just 40 years ago. 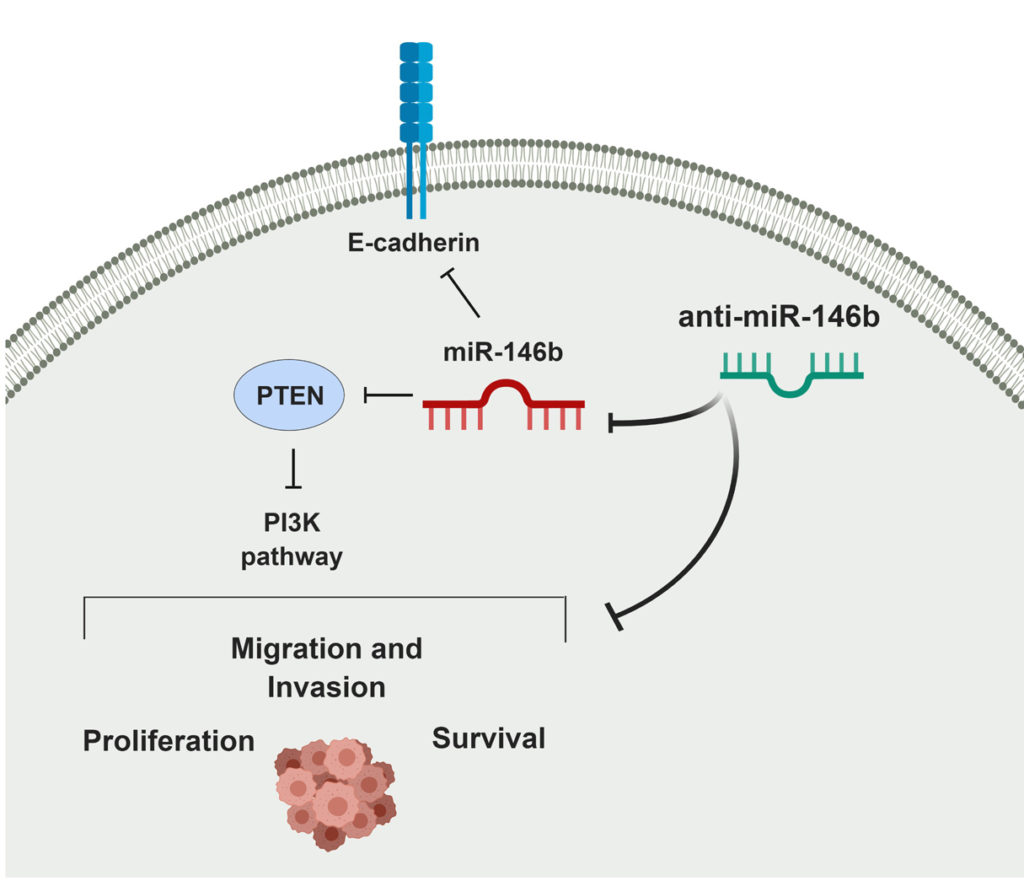 Fig. 1. Schematic model explaining the oncogenic actions of miR-146b and the consequences of its inhibition in thyroid cancer. Created with BioRender.

Thyroid cancer usually responds well to the traditional therapeutic triad for this disease – surgical removal of the gland (thyroidectomy), radioiodine ablation of thyroid remnants and thyroid hormone replacement therapy. However, a small percentage of thyroid cancers are refractory to standard treatments, and constitute the most aggressive and lethal forms of thyroid cancer. Once diagnosed with this specific type of thyroid cancer, the average life expectancy is only about 6 months. Accordingly, the discovery of new mechanisms that drive the initiation and progression of this cancer may offer novel opportunities for therapy.

MicroRNAs (miRNAs) have recently taken center stage in human molecular oncology and it is now clear that they have a fundamental role in the development and progression of human thyroid neoplasms. miRNAs are non-coding RNAs of approximately 22-nucleotide-long that regulate gene expression, typically by binding to the 3′ untranslated region (3’UTR) of target messenger RNAs, triggering their degradation or translational repression. Dysregulation or aberrant expression of miRNAs has been implicated in cancer pathogenesis and several miRNAs have been shown to be dysregulated in thyroid tumors. Recent transcriptional profiling studies of the miRNA transcriptome of thyroid tumors have identified a number of up- or down-regulated miRNAs, and have helped to shed some light on their role in thyroid tumorigenesis. Among the up-regulated miRNAs, miR-146b is highly overexpressed in differentiated papillary thyroid tumors and was shown to significantly increase cell proliferation and to be associated with aggressiveness and dismal prognosis. Furthermore, miR-146b regulates the expression of thyroid genes involved in differentiation, and we previously demonstrated that miR-146b-3p specifically represses, in a feedforward loop, the transcription factor PAX8 and its target gene the sodium iodide symporter (NIS), whose activity forms the basis for radioiodine therapy.

In our new study, we found that the tumor suppressor PTEN contains a functional miR-146b-5p binding site in its 3′UTR. PTEN is a phosphatase that negatively regulates the PI3K pathway, which is usually hyperactivated in several tumors. Overexpression of miR-146b in thyroid cells significantly decreased PTEN expression and consequently increased PI3K signaling. In addition, we demonstrated that miR-146b promotes proliferation, survival, invasion and migration, which are all cancer hallmarks. Interestingly, co-expression of PTEN reduced miR-146b-induced aggressiveness. Finally, we showed that miR-146b also targets the epithelial adhesion molecule E-cadherin, which is essential for the cell-to-cell attachment found in non-cancerous differentiated thyroid cells (Fig. 1).

An important translational finding of our study was that miR-146b inhibition in vivo suppressed miR-146b-induced cancer aggressiveness, as the intratumoral delivery of a synthetic and clinically amenable miRNA inhibitor molecule blocked tumor growth in a human thyroid xenograft model. As expected, the miR-146b inhibitor restored the levels of the two targets here described, PTEN and E-cadherin.

Our data provide evidence of two new important targets of the oncogenic miR-146b. In addition, our findings provide a framework to further study the use of miR-inhibitors as a new therapeutic option to target advanced thyroid cancer.