The aged immune system in multiple sclerosis: focus on B cells

Fig. 1. Immune and B cell aging. During aging, the immune system undergoes changes (left) that lead to increased inflammation and decreased immune responses. One of the consequences of immune aging on the B cell compartment (right) is the accumulation of age-associated B cells such as double negative (DN) and CD21low B cells. These B cell populations share several characteristics that render them interesting targets for further study in autoimmunity.

B cells are immune cells that belong to the lymphocyte population. They recognize and bind antigens using a specific receptor, become activated and undergo maturation into effector plasma cells that produce large amounts of antibodies. In MS, B cells are important players in the disease process. Plasma cells produce autoreactive antibodies (autoantibodies) but B cells also stimulate proinflammatory immune responses by presentation of specific antigens and providing costimulatory signals to other immune cells. In addition, B cells produce proinflammatory molecules, cytokines, that contribute to the detrimental immune response in MS.

During aging (Fig. 1), the immune system undergoes changes that lead to increased bacterial and viral infections while vaccine efficacy declines. Further, modifications of immune cell repertoires and functions are observed. Aging is linked to autoimmunity as autoimmune disorders occur more frequently in the elderly. Interestingly, a proportion of MS patients display characteristics of an aged immune system. B cell immunity is also affected by aging, as a decline in the output of new B cells leads to reduced protective antibody responses and increased generation of autoantibodies. Diversity in the antigen specificity of B cells and antibodies is reduced and specific populations of ‘age-associated B cells’ accumulate, such as the double negative (DN) immunoglobulin (Ig)D–CD27– B cells and the CD21–CD11c+ (CD21low) B cells. Both of these have been associated with the production of autoantibodies and are able to migrate towards sites of inflammation although their origin remains unclear. DN and CD21low B cells have been described in autoimmune disorders such as systemic lupus erythematosus (SLE) and rheumatoid arthritis (RA). 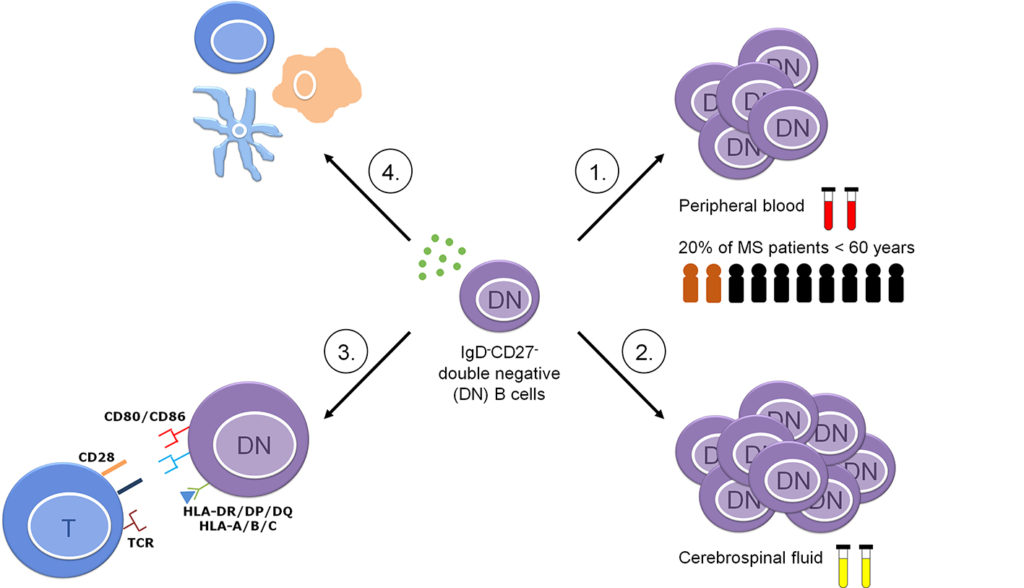 Fig. 2 Functional characteristics of DN B cells in MS. (1) DN B cells are expanded in the peripheral blood of 20% MS patients < 60 years. (2) Frequencies of DN B cells are increased in the cerebrospinal fluid of MS patients when compared with the peripheral blood. (3) DN B cells express molecules involved in antigen presentation (human leukocyte antigen (HLA)-DR/DP/DQ and HLA-A/B/C) and costimulation (CD80, CD86) to T cells, another immune cell population belonging to the lymphocytes. (4) DN B cells produce proinflammatory cytokines that stimulate other immune cells, such as dendritic cells, macrophages and T cells.