The apothecary inside us

New drugs might be found right under our noses or, more precisely, in our guts as we learn more about the ways metabolites from intestinal bacteria modulate human metabolic and immunity pathways.  Our recently published paper in the journal Drug Discovery Today, reviews the rapidly emerging science about the relationships between human health and small molecules that are metabolic by-products of our gut microbial community, also called the gut microbiome. It is widely known that certain consumed foods are more beneficial than others for our health. Recent scientific studies are illuminating the mechanisms of action behind these positive effects which involve some sort of cross-talk between bacterial metabolites and human molecular receptors.  For example, the healthy benefit of a high fiber diet is well established. Mechanistically, this benefit is facilitated by gut bacteria transformation of high fibre foodstuffs into specific metabolites known as short chain fatty acids or SCFAs. Deficits of SCFAs producing bacterial species are associated with increased severity of many metabolic and inflammatory diseases including Type 2 diabetes mellitus (T2DM), obesity, colorectal cancer, inflammatory bowel disease and irritable bowel syndrome. SCFAs are known to be signaling molecules or ligands of important classes of human proteins that are widely investigated as drug targets, the G-protein coupled receptors. The downstream effects of these interactions results in the modulation of regulatory T-cells, which are important actors immunity. Other studies have shown that SCFAs administered to mouse models of intestinal colitis disease seem to have protective effects. 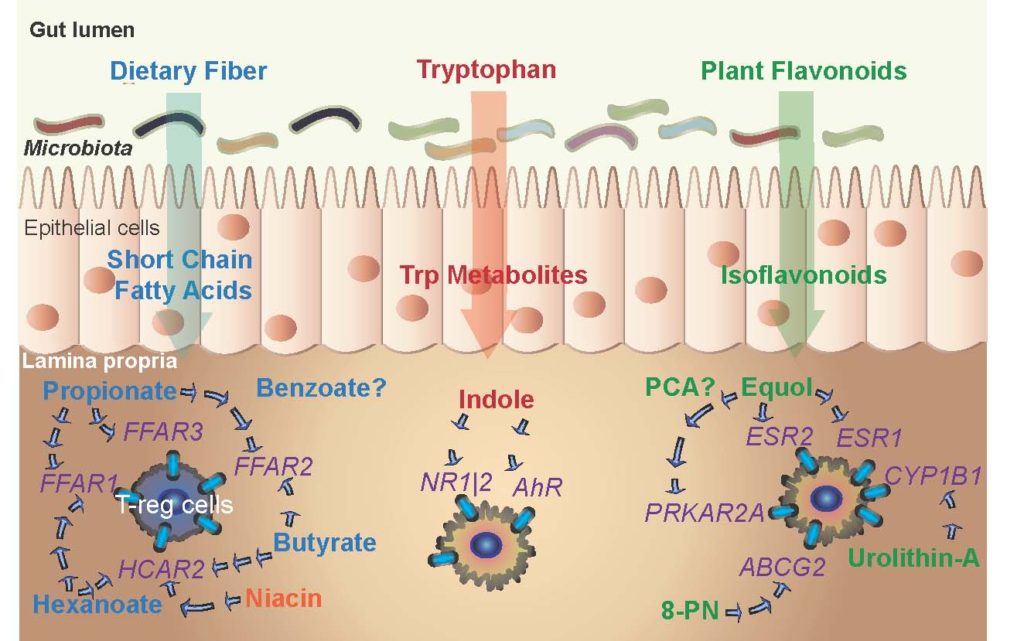 In addition to their potential health benefits, drugs based on bacterial metabolites are also attractive because these molecules already co-exist in the human intestinal tract, therefore are safe substances in the right dosages.  Thus the evolved co-compatibility of gut microbiota with the human immune system suggests a potentially rich area for discovering new drug-like molecules which are highly specific modulators of human pathways and de-risked for toxic side-effects.

Our paper reviews the biochemical properties and human receptor interactions of several different kinds of metabolites including niacin (a B vitamin), indole (a derivative of the amino acid tryptophan), and various metabolite by-products of plant phytochemicals. In addition, we searched the millions of compounds in the libraries of our pharmaceutical company, GlaxoSmithKline, to find pre-clinical molecules that were highly similar to ten different bacterial metabolites. We found over 400 compounds with close but not identical similarity to these metabolites. Through further data-mining, we identified about 100 human proteins which might be potential targets for these “metabolite-mimics”.  Further studies are underway to confirm these compound-target associations and evaluate potential modulatory properties in cell-line models of immunity and inflammation.