The emergence of upright, bipedal walking is a characteristic of human evolution that separate us from our quadrupedal cousins—other animals. The upright walking posture freed our hands so that we could perform skilled tasks like signaling, carrying, and throwing as we moved through our surroundings. Despite our upright posture, bipedal walking and quadrupedal locomotion share many features in the way they are controlled by the brain and spinal cord. 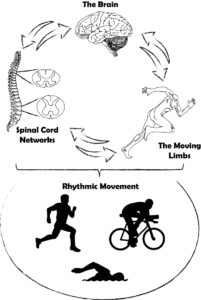 Fig. 1. A general outline of the interrelated systems (i.e. the brain, spinal cord networks, and moving limbs) that work together to generate and maintain smooth rhythmic movement in humans, such as walking, running, swimming or cycling (shown at bottom).

Comparative research between quadrupedal animals like the guinea pig, rat, cat and turtle reveal control mechanisms that exist within human spinal cords to regulate walking and other rhythmic movements like running, swimming, scratching, and hopping. The main job of controlling walking falls to the spinal cord. Without input from the brain, many animals are capable of sustaining walking (yes, this explains how the chicken can actually run around with it’s head cut off). This is because walking is partially controlled by networks of neurons residing in the spinal cord, which cause rhythmic, alternating muscle activity. Neural networks regulating coordination between our legs, between our arms and between our arms and legs are similar to those in animals who walk on all four limbs. Some animals also have sensory connections between their limbs that act to communicate information throughout the body. This sensory communication increases or decreases activity of other limbs during rhythmic movement. This is especially useful when we need to quickly respond to an obstacle. We’ve all experienced something like this when (almost) tripping, slipping, or stubbing a toe on a tree root or other object while walking. Accumulating evidence shows that we humans have retained extensive connections between the limbs similar to animals that walk on four limbs, after all, humans are animals too. The fact that humans have retained spinal cord networks and extensive connections between our arms and legs can be foundational in our approach to physical and neurological rehabilitation. Although neurotrauma such as stroke or spinal cord injury causes interruption of communication from the brain to the spinal cord, muscles, and sensory connections, spinal cord networks and connections between the limbs remain intact. 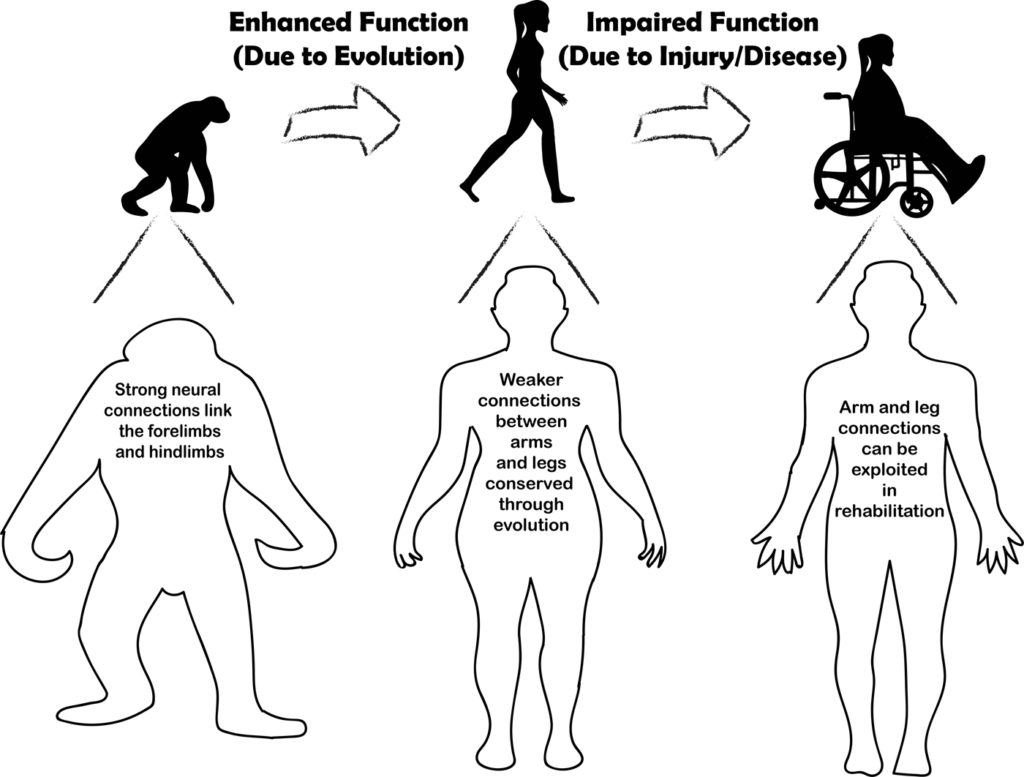 Fig. 2. The top represents a general continuum of our ancestors (left), to present day, neurologically intact humans (middle), to individuals with neurological impairments (i.e. Stroke, Multiple Sclerosis, Spinal Cord Injury, etc., right). The bottom illustrates how connections between the forelimbs and hindlimbs in our ancestors have remained intact (albeit to a lesser extent) through evolution in present day humans, which connect the arms and legs. These connections remain partially intact in people affected by neurological impairment and can be exploited in rehabilitation to facilitate walking.

This means that by performing movements that emphasize neural connections among our arms and legs we can help strengthen connectivity of the nervous system. Movement of the arms can be used to affect the neural connections between the legs, which can transfer to improve walking function. Recent work in chronic stroke has demonstrated that performing a physical training program of arm and leg cycling can improve strength, clinical measures of walking and neurological connection between the arms and legs. In this way we see that, in concert with other conventional therapies, the arms can give the legs a helping hand in the rehabilitation of walking.