The autonomous glycosylation of Giant, but sweet, viruses

The most of proteins carry sugars on them, which significantly modify their properties such as biological activity, solubility and resistance to protein-degrading enzymes. The sugars on proteins drive several fundamental biological mechanisms, such as hormones response, immune system, embryo development and so on. 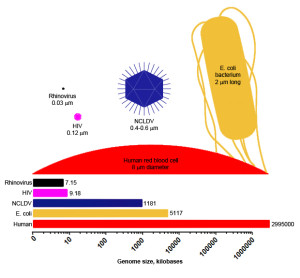 Fig. 1. NCLDV, shown in blue, are closer in size to E. coli bacterium than they are to traditional viruses, such as Rhinovirus and HIV. A human red blood cell is shown for reference. NCLDV have also larger genomes than traditional viruses, though still smaller than E. coli. Organisms’ dimensions are expressed in micrometers (µm) which are one thousandth of millimeter. Genome sizes are expressed in kilobases which correspond to one thousand nucleotides.

Recently, it has been discovered a novel group of Large DNA viruses infecting eukaryotes (from algae to amoebae). These viruses belong to Nucleo-Cytoplasmic Large DNA Viruses (NCLDV) group and are characterized by huge size and large genomes both comparable to cellular organisms (Fig. 1). In NCLDV genomes, several genes involved in glycosylation, including glycosyltransferases, enzymes responsible for the production of sugars and sugar-modifying enzymes were found. All together these features provide bases for the existence of novel virus-encoded glycosylation machineries that are independent from the host. In addition, NCLDV replicate in well-defined cytosolic regions of the host, named “viral factories”, at which periphery fully-infective particles are found, and where also glycosylation probably occurs.

In the last years, several NCLDV’s pathways involved in the synthesis of sugars found on these viruses surface were characterized. From phylogenetic studies, enzymes belonging to the same pathway seem to be acquired from both prokaryotes and eukaryotes. In other cases, enzymes are highly divergent from the cellular homologues, suggesting either a very early acquisition from a host by a viral ancestor or an accelerated evolution of more recently acquired viral genes. In conclusion, a comprehensive study of large DNA viruses glycosylation may contribute to understand the origin and evolution of today’s cellular glycosylation pathways.

Recently, the structure of glycans linked to the surface proteins of PBCV-1, a member of Phycodnaviridae family, have been characterized. These glycans (Fig. 2) reveal unusual characteristics that bolster the existence of an autonomous glycosylation in NCLDV. The role of PBCV-1 glycans structure is not completely clear. It is possible that they play a role in the adhesion to the host. Glycans could be also beneficial for protection from the environment. 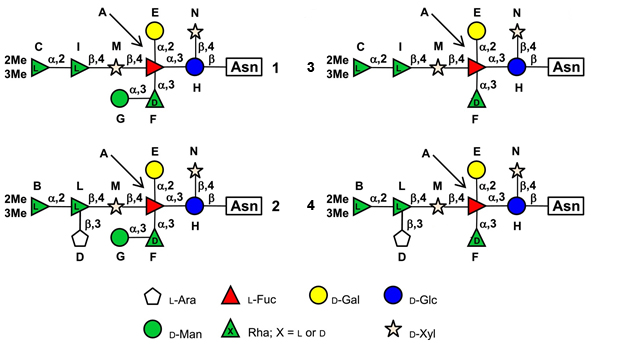 Fig. 2. Structure of glycans on PBCV-1 surface. Two major structures were found differing for the presence of a branching L-arabinose bound to the inner L-rhamnose (1 and 2). Structure 3 (or 4) differs from 1 (or 2) by lacking a D-mannose unit.

The impact of large DNA viruses on human health is still highly controversial; however, besides effects due to virus replication, exposure to viral glycans could also affect the immune response and it even might contribute to the development of autoimmunity, as it occurs for bacterial glycoconjugates.

Finally, identification of enzymes involved in NCLDV glycosylation could also be seen in a biotechnological perspective, resulting in practical glycotechnological applications. In fact, they would expand the repertoire of enzymes already used in platforms for producing glycoconjugates and for modification of proteins. Moreover, the recombinant NCLDV enzymes for sugar synthesis are often more stable and with different properties compared to the cellular homologues; thus, they could represent useful tools for the production of rare sugars.