The Brief Post-Coma Scale (BPCS): an easy tool to assess responsiveness in disorders of consciousness

The Brief Post-Coma Scale (BPCS) is an easy diagnostic tool to differentiate patients with disorder of consciousness in the minimally conscious state (MCS) from those in unresponsive wakefulness syndrome (UWS), formerly defined as vegetative state (VS). The BPCS consists of 7 items assessing eye tracking, command-following, spontaneous motility, decerebrated and decorticated posturing (which consist respectively in intrarotation with extension of the 4 limbs and flexion and intrarotation and extension of the lower limbs), psychomotor agitation, the ability of safe oral feeding, and the presence of recurrent infections and/or hyperthermia, with 3 option answers: yes; sometimes/partially; no (Appendix). Aim of the study was to assess the diagnostic validity of the BPCS in comparison with the Coma Recovery Scale-Revised (CRS-R), in its Italian validated version, the Disability Rating Scale (DRS), the Level of Cognitive Functioning (LCF) and the GOS. This Brief Scale has been used in an Italian Multicenter Study in which 545 patients with DoC, were enrolled (age: 56.06±17.26; 59% M; 41% F). The 54% of these patients were Traumatic Brain Injury (TBI) and according to the Coma Recovery Scale Revised (CRS-R), the diagnosis was VS/UWS in 70% of the cases and MCS in the remaining 30%. The BPCS was administered at an average of time interval from acute event of 27 months.

The novelty of the proposal was that the BPCS questions regarding the visual fixation or eye tracking as well as psychomotor agitation were asked to the main caregivers, including nurses, physiotherapists, speech therapists (rehabilitation team) and relatives of the individuals enrolled, in reference to the last week. To each item it could be assigned a score of 1 for the presence of a positive sign, 0 for negative ones, whereas for some items it is possible to give a score of 0.5 if the sign is present just sometimes or partially (Fig. 1).

Thus the assessment was not based on a single behavioral assessment of a professional but on the judgement of the main caregivers, who live closer to the patients. 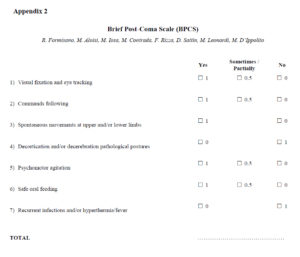 Finally, the agreement of the BPCS and clinical diagnosis was of 84.4% for the total BPCS-score, followed by eye tracking, command following, spontaneous motility, safe oral feeding, pathological
postures (decerebrate and decorticate posture), psychomotor agitation and hyperthermia or infections. The best cut-off value for BPCS total score resulted of 2.25. Hence, given that the score
of BPSC has a step of 0.5, the closest threshold for BPSC was of 2.5. This threshold resulted to have a sensitivity of 87.7% and specificity of 79.4% with respect to diagnosis as a possible cut off
to distinguish patients in VS/UWS from those in MCS.

The well recognized role of the caregivers’ emotional stimulation in the evaluation of responsiveness and the statistically significant correlation of BPCS, mainly obtained by the caregivers reports, with the CRS-R and the other clinical scales leads to propose BPCS also for possible phone interviews to the caregivers and long term follow up studies of patients with prolonged DoC.