The cellular advantage of using a macrolide for community-acquired pneumonia

Community-acquired pneumonia has been one of the top ten causes of death in the US over the last 60 years despite the widespread use of antimicrobials.  National guidelines (at idsociety.org) recommend two primary antibiotic regimens – one with a macrolide antibiotic (the same as in a Z-pak) and one without it.  Macrolide antibiotics may benefit a patient beyond killing bacteria by modulating the immune system or decreasing the inflammation that comes with having pneumonia. 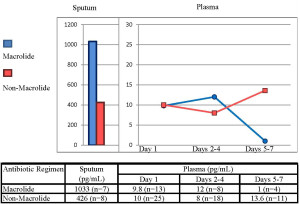 Studying inflammation has primarily been in mice models, while studying outcomes like death and length of stay has only been in human studies.  In the manuscript “Macrolide use and neutrophil function/cytokine levels in hospitalized patients with community-acquired pneumonia: a pilot study” we put together studying inflammation and outcomes in the same human population.

Patients in the study had blood and sputum analyzed for neutrophil function (a type of white blood cell active in infections) and cytokine levels (a type of protein released from cells causing inflammation such as interleukin (IL)).  The clinical outcomes measured were time to clinical stability, length of stay, in-hospital mortality, 30-day mortality, and 30-day rehospitalization.

Among 40 people in the study, 14 received a macrolide and 26 did not.  Although statistically significant results were not attained (common for small pilot studies), there were trends identified (which is the purpose of a pilot study).  Three cytokines, IL-6, IL-8 and interferon-gamma, were less in the group who received a macrolide (Fig. 1.). 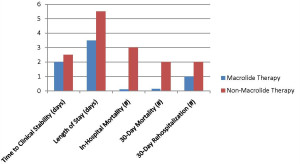 Fig. 2. The difference in five clinical outcomes between patients with community-acquired pneumonia who received a macrolide and those who did not.

The bar graph on the left shows the amount of IL-6 in the sputum.  The high levels in both groups support that both groups of patients actually had pneumonia.  The levels shown in each group on the right reveal how the level of IL-6 decreases as the week progresses in the macrolide group, while it stays elevated in the non-macrolide group.  The macrolide group also indicated a trend toward favorable clinical outcomes in each category measured (Fig. 2.).

This pilot study indicated that should a full study be performed with a relevant number of patients enrolled, the inflammatory factors that were measured may be significantly different between patients with pneumonia treated with or without a macrolide.  The major implication of this is there would be a consensus that a macrolide should be prescribed to everyone with community-acquired pneumonia.  Future studies should be performed on certain properties of macrolides including neutrophil function and systemic cytokine levels.