The cerebellum differently contribute to cognitive processes from childhood to adulthood

In recent years it has become clear that key cognitive abilities, once considered only based on processing of the cerebral circuits, are highly influenced by cerebellar structures. At present, there is agreement on cerebellar involvement in both movement and cognition processing. In this framework, “sequences detection hypothesis” is considered an interesting proposal to understand how the cerebellum contributes to cortical functions.

Sequencing is defined as “the ability to perceive, represent and execute a set of actions [events] that follow a particular order”. This is a sovramodal function present in virtually all human activities and even in many processes at neuronal level. Particularly, sequence processing plays a critical role to support feed forward control mechanisms in behaviour and cognition. Feed forward control requires to anticipate events with either implicit or explicit mechanisms providing an undoubtable evolutionary advantage. Moreover, the capacity to predict incoming events is the essence of the so-called “executive function”, classically referred to frontal areas but recently under scrutiny of cerebellar researchers. 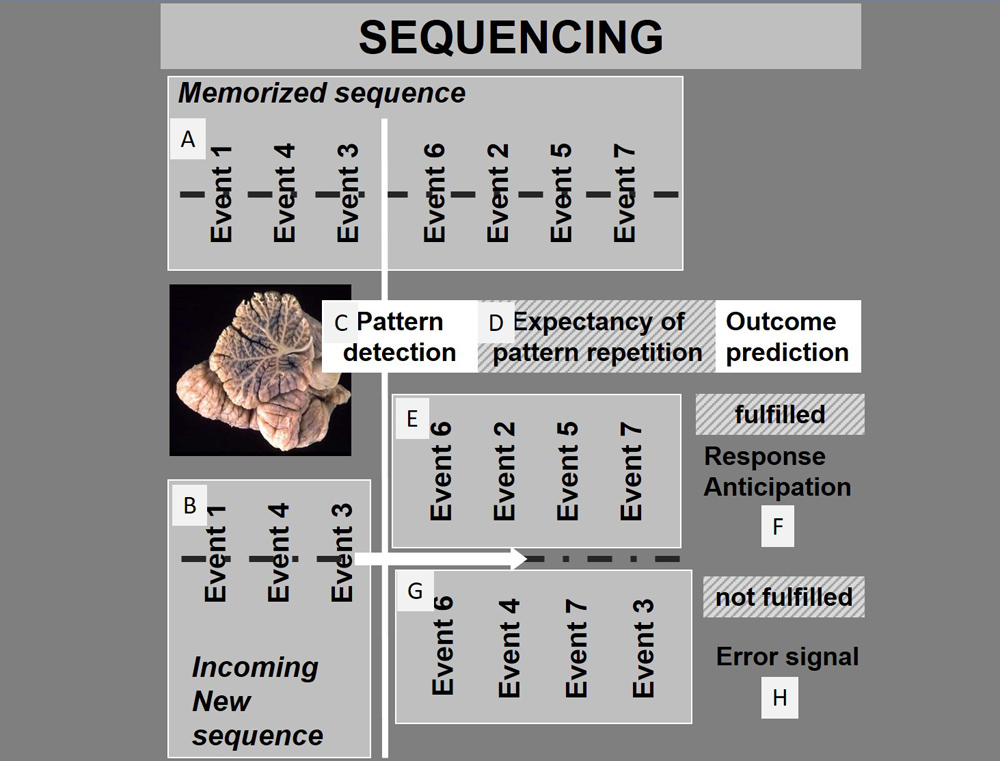 Fig. 1. Proposed mechanism of cerebellar sequencing for prediction. Incoming events are continuously monitored in the cerebellar circuits. Relations between events are compared in the cerebellar corticonuclear microcomplex (Ito, 2005) and stored in a working-memory buffer (A). Through the same mechanisms, sequences of new incoming events are compared with previously stored event sequences (B). If a match is recognized (C), then an expectancy of repetition is generated (D). The cerebellar monitoring of the flow of events continues, and as long as the prediction is maintained (E), response anticipation is conveyed, and feedforward control can function smoothly (F). If prediction fails (G), then an error signal is activated by the cerebellar output system (H), and feedforward control is interrupted or corrected.

Interestingly, considering the evolutionary importance of prediction, literature data suggest that the cerebellum might play quite different roles during development and adulthood. Main support to this idea derives from the observations that cognitive/behavioral effects of cerebellar damage are different according to the time of its occurrence.

It has been documented that early disruption of the cerebellum causes significant, long-lasting, and wide-ranging changes in the structure and function of the cerebro-cerebellar system, with long-term effects on behaviour and poorer outcomes than similar cerebellar damage in adulthood. The importance of the cerebellum during early development can be understood taking into account the cerebellar ability in building internal models to allow feed forward control in many cognitive and non-cognitive modalities.

In contrast with this view is the clinical features observed in cerebellar agenesis, the most severe form in the spectrum of cerebellar disruption. In spite of often extraordinary MRI pictures observed, cerebellar agenesis is a clinical condition compatible with a honourable existence, although somewhat limited. This clinical entity suggests the possible existence of compensatory strategies (eventually based on declarative memory) more closely linked to the functions of the cerebral cortex. In other words, the cerebral cortex, in presence of a cerebellar agenesis, may progressively compensates for functions normally controlled by the cerebellum.

On the other hand, comparison between developmental and adult lesions demonstrates intriguing differences in clinical pictures more than in symptomatology severity. Adults with cerebellar damage show deficits in acquisition of a new skill, but may only show subtle deficits performing already-acquired skills that are supported by well-established networks.

Central role of the cerebellum in many areas of human abilities, motor as well as cognitive, in childhood as well as in adulthood, is well established. Present review drive interest to the changing face of cerebellar influence on motor and behavioural abilities when adult and developmental lesions are compared. The idea that the cerebellum might play quite different roles during development and in adulthood is proposed, and evidences from experimental and clinical literature reported. At present, the hypothesis of a dual cerebellar function during development and in adulthood is conceivable and intriguing. Nevertheless, more evidences are needed to fully understand the changes occurring between the childhood and adulthood not only in cerebro-cerebellar interactions, but also in compensatory mechanisms.